The State of the Union Address: Hope for a Better Future 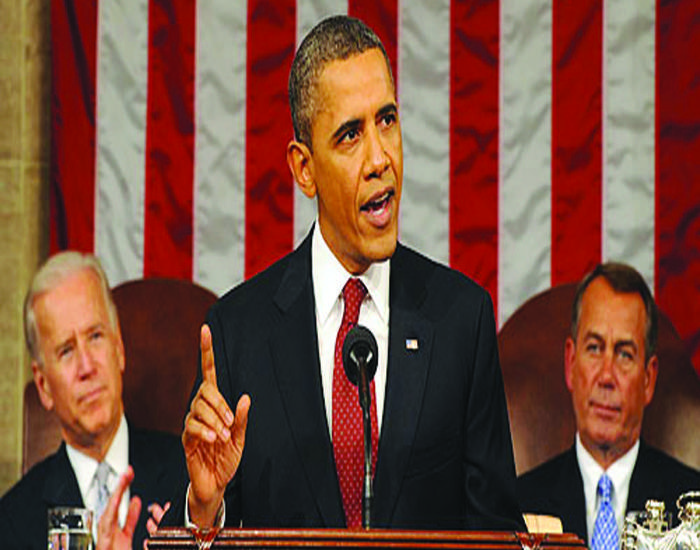 David Hatten, Tip of the Hat

On Tuesday, Jan. 24, President Obama gave his State of the Union address to the American people. As is typical of President Obama, it was a well-delivered speech with some powerful imagery. That’s not to say it was perfect. There were many good ideas but there were far more easy sound bites. While there were some powerful statements that attempted to bridge the gap between parties in our capitol and in our nation, there were also some sentiments that will give President Obama’s critics some ammo against him.

Hope has always been a central theme of Obama’s rhetoric and this speech was no different; hope looked over every topic in this address. However, this time the hope was edged with dismay. Obama discussed the shrinking possibility of the American dream and “…the basic American promise that if you worked hard, you could do well enough to raise a family, own a home, send your kids to college, and put a little away for retirement. The defining issue of our time is how to keep that promise alive. No challenge is more urgent. No debate is more important.” There is hope for the future, he claimed, but that hope is under attack by the possibility that the ideals on which this country was founded on are being eroded. He also said there is hope for the recovery of our economy and our industry, and cited Detroit and Cleveland as cities where we can come together and fix problems. He acknowledged that things have gotten bad, but really tried to convince listeners that we can rebuild our way to the top and that the American dream is not out of reach for any citizen of this nation.

As Obama worked his way through the issues, from the economy to the budget to education, he repeated a phrase several times: “Give me this bill, and I’ll sign it.” He laid out his desires for meaningful tax reform that will encourage small businesses, for common sense financial regulation and for common sense deregulation. He linked immigration with education and almost begged for a system to encourage people who come here for our higher education to stay here and contribute to our industry. One of the most important bills Obama promised to sign is a compromise between reducing social welfare and tax reform for those making over $1 million a year. For his supporters, this initially reads very well and it’s something that just makes sense. However, this was a risky endeavor for him and might prove a boon to anti-Obama campaign ads, which could make him eat his words if he doesn’t sign the first bill that lands on his desk. It’s a simple fact that this nation is on an unsustainable path, but that will not be rectified by destroying our safety nets or by completely undermining the wealthy. There needs to be a compromise so both sides can thrive while doing what is best for the country, and both sides need to be fair in what they ask the other to give up.

Along with hope, much of Obama’s imagery and power came from the idea of cooperation. “No one built this country on their own. This nation is great because we built it together. This nation is great because we worked as a team. This nation is great because we get each other’s backs. And if we hold fast to that truth, in this moment of trial, there is no challenge too great, no mission too hard. As long as we’re joined in common purpose, as long as we maintain our common resolve, our journey moves forward, our future is hopeful, and the state of our union will always be strong.” Extremists might use this rhetoric to corrupt the address into some socialist plot to destroy American individuality, but if they could suggest a method of staying a relevant nation without basic teamwork I’d like to hear it. Bridges are built together, not by individuals.

President Obama is one of the most skilled orators this nation has seen in a very long time. Listening to him speak is one of the most enjoyable parts of today’s politics, and watching him play a crowd is amazing every single time. His style is gorgeous; unfortunately, style is not the only meter of success. Listening to President Obama speak, it’s easy to believe that we as a country can recover from this recession and return to the top of the world in industry, education, and just about every other aspect. But there are holes in his hour-long speech. I would have liked to see him mention and propose a solution to the growing number of debt-ridden college graduates with useful degrees and without jobs. However, the address is worth keeping in mind as we move through the year to see how his actions stack up to his stated intent.