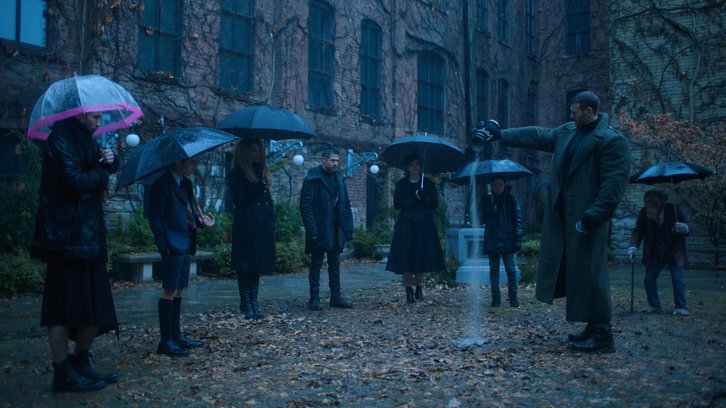 "The Umbrella Academy" follows seven people who were all born on the same day and adopted by an eccentric billionaire. It is based off of a graphic novel created by the lead singer of My Chemical Romance.

A little over a decade ago, My Chemical Romance (MCR) lead singer Gerald Way decided he wanted to tell stories using a different medium. So, in September 2007, he released his first limited series of graphic novels, illustrated by Gabriel Ba, that imagined an entirely new universe of superheroes entitled “The Umbrella Academy: Apocalypse Suite.”

The graphic novel’s premise is that one day 43 women who started the day decidedly not pregnant give birth to children that an eccentric billionaire named Sir Reginald Hargreeves takes an immediate interest in. He is able to adopt seven of the children, who have special powers that he trains them to use to fight crime as a group known as the Umbrella Academy.

“Apocalypse Suite” is also the source material for the first season of the show that dropped on Netflix on Feb. 15. It picks up many years later, with the Umbrella Academy having split up and developed into whatever constitutes the opposite of well-adjusted adults.

The season begins with the death of Sir Reginald Hargreeves, an event that brings the Umbrella Academy members back together for the first time in over a decade. From here they must team up to prevent—you guessed it—the apocalypse, a task they only have seven days to achieve.

There are lots of aspects of the comic universe that make the show fun. The entire story is set in a slightly altered universe in which President John F. Kennedy was never assassinated and monkeys can talk and wear suits, but no one has invented the cell phone.

The characters themselves are also intentionally wacky. Way’s superheroes aren’t like Captain America. They each have a number and power associated with them except for Vanya (Ellen Page), who has been raised powerless, an outsider from the other super-children.

All of the others have suffered either childhood trauma or adult mistakes to make them each independently flawed—Diego (David Castaneda) is a vigilante and Klaus (Robert Sheehan) hasn’t been sober since the age of 13, which is par for the course of Hargreeves family’s messed up adulthood.

The show has a clear and compelling plot line and tells a story, but it’s as much about the characters themselves as it is about the apocalypse they’re trying to stop. This is both a strength and a weakness, as the interaction between the different broken adult super-people is generally entertaining but relies on each character becoming a caricature of their specific flaw. This is less of a flaw of the acting than it is the writing, as the cast and special effects division do a great job of delivering the look and feel of a graphic novel.

The music is another highlight of the show. While one might expect that a show produced by the lead singer of MCR would see him controlling the soundtrack, it is actually showrunner Steve Blackman that designed a soundtrack that can only be described as wonderfully jarring. Blackman’s decisions to do things like play goofy upbeat indie pop behind a scene with six gruesome shooting deaths is representative of the show’s entire vibe, and the whole program is substantially better for his music decisions.

Way and MCR guitarist and “The Umbrella Academy” producer Ray Toro, do appear on the soundtrack as musicians, covering both Simon & Garfunkel’s “Hazy Shade of Winter” and The Turtles’ “Happy Together.” Songs in “The Umbrella Academy” aren’t just 15-second snippets, either. They play out in their entirety and have the effect of being entire characters all on their own.

In total, there will be eight series of “The Umbrella Academy” comics, and Way and Blackman are hoping for as many seasons of the show. Netflix has yet to pick up the show for an eight season run, but season one makes it seem well within the realm of possibility.

Season one of “The Umbrella Academy” now streaming on Netflix.