There’s something about Margarita 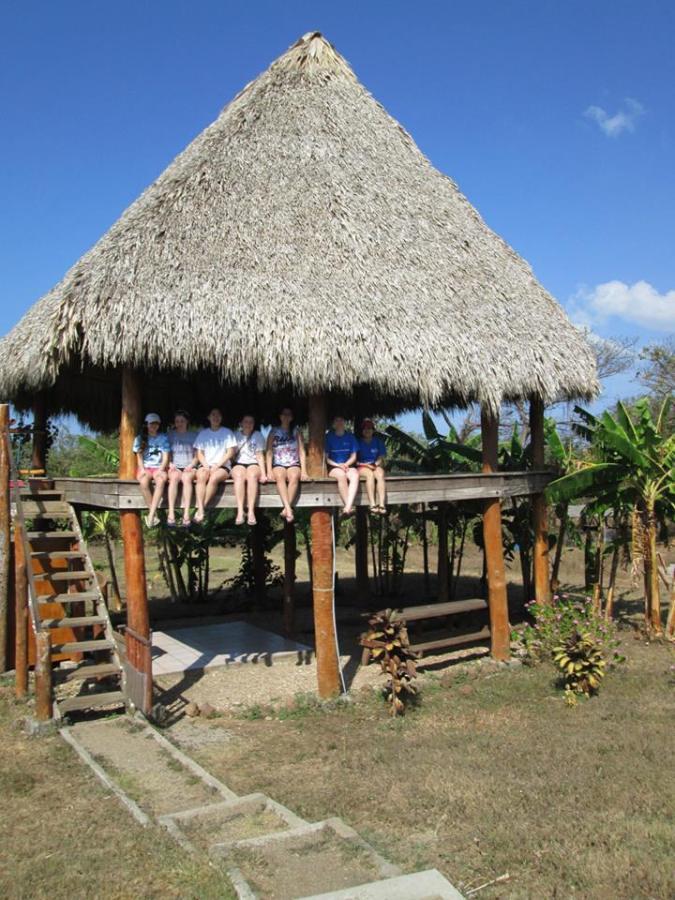 In the rural town of Aposentillo, Nicaragua, 16 Case Western Reserve University students sit lounged on hammocks by the beach, some talking, some petting the dogs that roam around the open property. The students, myself included, are waiting to meet with 64-year-old nurse Meg “Margarita” Boren, the brains behind the Nancy G. Lund Clinic, which, since 2004, has treated thousands of patients for diseases ranging from common sexually transmitted infections to pneumonia to Dengue fever.

Our Center for Civic Engagement and Learning (CCEL) sponsored spring break trip to Nicaragua was mostly spent working with Waves of Hope, a charity that helps to develop the surrounding community through education. However, on today’s trip, we are supposed to learn about Margarita’s clinic, where some CWRU nurses have travelled for their capstone projects.

The only problem is that Margarita hadn’t shown up yet.

When you talk to Margarita about her patients, she never seems upset or frustrated— she’s more loving, caring and protective. She calls them all, all 6,000 people who make up the eight communities that her clinic serves, her “children.”

And they are, in a way. Aside from running her clinic, Margarita’s charity, Circle of Empowerment, also runs a Saturday tutoring program for elementary school students, an adult literacy program, the first community library, the two bright yellow buses—complete with colorful murals—that take children and teachers to school each morning and numerous other programs in collaboration with other charities in the area. She’s basically the Superman of health care and education for rural Nicaraguans.

Not that she’ll say it like that, of course. When Margarita talks about her accomplishments, she does it in the most matter of fact way possible—“Yes, when I first came here, four children a year would die from pneumonia. But we haven’t lost a child in the 12 years since the clinic opened,” and, “We’ve had 100 percent attendance this year at our Saturday tutoring school.” Not bragging, just the facts. But the facts alone are pretty darn impressive.

Margarita’s health miracles aren’t just the product of her bringing valuable medications to the area, at a price that the community members can actually afford. In fact, Margarita tries to avoid using medications whenever possible, and focuses her efforts instead on teaching the community how to avoid getting sick in the first place.

One of the problems that Margarita noticed early during her stay in Nicaragua was the prevalence of asthma among the children in the community. On average, 14 kids per week would be rushed into the clinic, mid-asthma attack. They would struggle to breathe the thick, muggy air through their constricted airways. Some were even blue in the face by the time they came for Margarita’s help. She was always able to save them, using her trusty nebulizer to give the kids the medicine they needed to end the attacks. But the prevalence of the attacks worried her, and she knew that continuing to just treat the symptoms alone would only work for so long.

Armed with a plastic straw, a broom and a box of Lysol wipes, Margarita ventured out into the surrounding communities, travelling door-to-door between the thatched roof huts to explain to the mothers exactly what was happening to their children, and how to stop it. She had the mothers breathe through the straw so they could feel how their children felt during an attack.

Then, she swept at the ground with the broom, showing how easy it was to send up dust from the dry, red dirt roads that passed through the community—roads that were frequented by speeding dirt bikes and trucks, which uprooted a lot more dirt than just a small broom.

Finally, she used the Lysol wipes on the roofs and walls of the houses, revealing the mold and asbestos that were now populating the children’s lungs.

Then, she and the mothers brainstormed on ways to cut down on asthma risk factors. Speed bumps on the roads around the residential areas. Frequent home cleanings. Having pets sleep outside. And with just a few months of implementing these changes, asthma attacks were down to just one attack per two weeks.

“Funny thing is, that was ten years ago,” says Margarita. “I never went back and did that lesson again—the moms just kept on teaching it to each other. It really is a beautiful thing.”

Twenty minutes have passed, and Margarita still isn’t here. Her beautiful beachfront property, which features the pink and green striped walls of the clinic, as well as the large, thatched roof home in which Margarita and some of the clinic’s other nurses live, provides picturesque scenery for the wait, but it’s been a while.

Just then, though, Margarita comes rushing up the dirt path towards us, her watermelon scrubs crinkling as she walks. She waves as she comes up the path, says hello, and hurriedly explains that she had to run out to deal with a health emergency for a young girl in the neighborhood. She then has us all gather in a circle, sitting on plastic lawn chairs, where she tells us her story.

Margarita has faith. A lot of it. But she doesn’t spend her time trying to spread her beliefs.

“I hate when people go around knocking on doors asking ‘Have you found Christ?’” says Margarita. “It’s not faith that these people need. They have faith. That’s not the help we should be focusing on giving them.”

Margarita instead focuses her time on providing the services and opportunities that will allow the community members to advance themselves, and to pull themselves out of the poverty trap that many rural villagers in developing countries find themselves stuck in. Still, her faith is always close to her heart.

The majority of the $40,000 per year required to run the clinic comes from friends from the Grace Lutheran Church that she is a part of back in her hometown of Grafton, Wisconsin. The clinic’s namesake, Dr. Nancy Lund, was an acquaintance from church who generously decided to donate all of the funds for the clinic’s construction. It was through her church that Margarita first visited Nicaragua in the first place, as part of a 1999 mission trip to bring health care to rural villages hit by the devastating Hurricane Mitch, a storm that displaced 368,300 people and destroyed 340 schools and 90 hospitals.

Margarita, a single mother of two children, left behind a comfortable job as a behavioral health nurse at Columbia St. Mary’s Hospital in Milwaukee, Wisconsin. But with her children in graduate school and the support of her church behind her, she knew that this was a chance that she couldn’t turn down.

“I spoke three words of Spanish when I first came to Nicaragua,” says Margarita. “Hola, cerveza and baño. In that order.”

Still, in typical Margarita fashion, she learned how to use this to her advantage. Every morning, after making the 11-km hike into town, she entered into the classroom in which she taught adults in the community about health care and disease prevention. Standing in front of the room with 30-something uncomprehending faces staring up at her, Margarita realized that her frenzied hand gestures and sad attempts at miming out the words “urinary tract infection” weren’t going to cut it.

She spent her nights poring over Spanish medical textbooks, trying to learn the tough terminology that had been hard enough for her to learn in her native language. She would come back each morning and struggle to get her point across until, eventually, one intrepid student would realize the point she was trying to make and jump up to explain it to the rest of the class. Margarita would smile and quietly fade into the background while the students began to teach each other.

“When you get older, you can see more clearly how everything that you have done has helped train you for what you’re doing, at least if you’re lucky,” says Margarita. “For the first time in my life, I felt perfectly matched for what I was doing.”

Now, Margarita wishes her problems were that easy to solve. As her charity work expands, her pockets shrink. Her friends from church can only donate so much—they are already contributing half of the clinic’s budget, and many also give the $90 per year to sponsor a child for Saturday tutoring—money that gives them transportation to and from school, two uniforms, socks, shoes, a backpack and school supplies. For many of the children, it is their only pair of shoes.

“This year, we have 180 students enrolled,” says Margarita.

“We only have sponsorships for 140. I have yet to tell my board members about the extra forty kids. Shh,” she adds, placing a finger to her lips.

“One of the major things that we focus on is supporting and sponsoring these children so that they can get an education,” says Judy Spencer, who handles delegations on the board of Circle of Empowerment. Spencer says that one of the toughest problems the organization has had to face are sponsors who will only donate for a few years of a child’s education.

“If people are going to sponsor a child, it’s really important that they make a commitment to stick with it for the entire time,” says Spencer. “If they only sponsor a child for three years, it’s really hard to find a replacement sponsor, and that’s really tough for the kids.”

Margarita’s talk is well worth the wait. She’s enthralling, energetic, inspiring. At the end of the trip, nearly everyone cites it as one of their favorite parts. She sends us all home feeling like we could accomplish anything.

Margarita has hope that one day she can leave her clinic and know that she has left it in good hands. The good hands of the community members who she first came to the country to help.

Margarita is all about empowerment—“Nicaraguans teaching Nicaraguans,” and “taking charge of their own destiny.” It sounds cheesy on paper, but when Margarita talks about it, with the light shining in her eyes and the wide, almost childlike smile on her face, it’s pretty easy to buy into.

“I’m a grandma now,” says Margarita. “I need my grandbaby time. And if I’ve done my job right, I should be able to leave here, to go back to Wisconsin, knowing that I’ve empowered these people, and that I’ve left them with the skills necessary to help each other help themselves.”

CCEL will be hosting another spring break trip to Nicaragua this year. Applications are due on Dec. 1. Interested students should contact Angela Lowery, the assistant director of CCEL.