Third-year shortstop wipes off the dirt 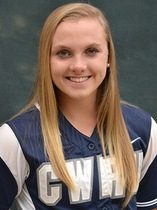 Courtesy of Department of Athletics

Third-year shortstop Nicole Doyle is a key for the team and has been recognized with UAA First-Team awards and NFPCA Third Team All-American honors.

Doyle’s father helped her growth as an athlete. She recalled him spending hours and hours every season of the year practicing with her to work and perfect her skills. Even now, she gets constant support from her dad as he comes to every game, no matter where it is.

Since entering CWRU, one of Doyle’s favorite games has been the team’s defeat of Emory University last year. It was the first time she had ever been on the team for a victory against the tough Emory team. Doyle recalled scoring the winning run on a difficult scoring play, which made the game even more monumental.

Off Mather Park, Doyle is involved with a multitude of groups from Case Association of Student-Athletes to Kappa Alpha Theta. Additionally, she went on the Undergraduate Wall Street Trek this year to get more involved in her field of accounting.

Doyle found her love for accounting through the ample knowledge she is able to gain about the business world. Accounting encompasses many different career paths and opportunities, which excites her. Doyle also has an internship this summer with Morgan Stanley in New York City. She said she is excited to demonstrate her knowledge and learn even more on top of her already extensive accounting background.

As for when she’s not hitting the books or on the field, Doyle likes to explore Cleveland.