Third-year student shot on South Side

Two suspects taken into custody after shooting student in the torso 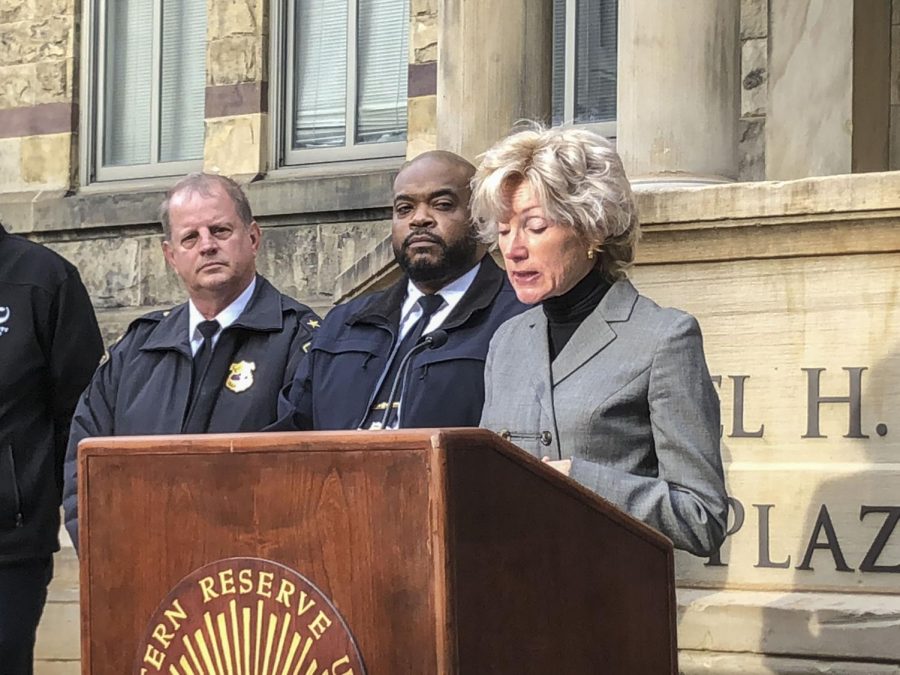 On the night of Nov. 3, a Case Western Reserve University student was shot in a parking lot on Murray Hill Road during a carjacking incident which escalated into a shootout with police.

Just after 8 p.m., the CWRU Police responded to reports of a gunshot victim in a parking lot in South Residential Village. Upon arrival, the officers found a student who reportedly encountered two youths in the lot who attempted to steal the student’s car. After shooting the third-year student in the stomach, the suspects fled before police could arrive on the scene.

The City of Cleveland and University Circle Police Departments connected with CWRU’s force in the lot shortly after. At 8:15 p.m., the UCPD reported that the two suspects were apprehended in the vicinity of East 120th Street and Coltman Road. One exchanged fire with officers and, while none of the UCPD officers were injured, the suspect was shot. The officers then proceeded to secure the scene and gathered evidence and information from those present during the shooting. Both Javon Williams and Shamar Smiley have been charged with attempted murder. Williams is held in county jail on $1 million bond, while Smiley, who was shot by UCPD and transported to the hospital, was charged on Tuesday after a release from the hospital.

Hodge said that the three police forces frequently work together and have a “strong, collaborative working relationship.”

Residents on South Side had difficulty comprehending the situation, but according to Co-Director of Residence Life Stephen “Skip” Begley, Resident Assistants (RAs) did their best to help students with their emotions.

“The RAs have reported that many students just wanted to talk through what had happened, how it made them feel and what they could do to help,” he said. “The RAs did a lot of listening and made referrals to campus resources, such as University Counseling Services or the Interreligious Council, for those students who needed more support.”

The University offers an on-call service to those living in campus housing, which is answered by the Office of Residence life during business hours. At night and on weekends, though, different levels of staff respond to those calls. At the time of the shooting, RAs were not on call, only Supervisors On-Call (SOCs).

Begley said that SOCs were notified about the incident and responded to CWRU’s management of the situation. “The severity of the incident and its location meant that CWRU Police and University leadership took on the most active roles in responding to the incident,” he explained.

Although the CWRU police officers are presently working to respond to dangerous situations with greater safety measures on campus, Hodge says there is always room for improvement due to the “ebb and flow” of crime frequency on or near campus.

“Incidents overall were significantly lower in 2017 than in the previous two years, but incidents like this weekend’s shooting powerfully demonstrate that numbers alone do not define the security of a community,” said Hodge.

Hodge also explained that various safety measures like the CWRU Shield app, a 30 percent increase in security cameras since 2015 and training opportunities like A.L.I.C.E. are effective, but the department wants to do even more to keep students safe.

Third-year student Libby Schubert shared their concerns on potentially increasing police presence on campus out of what they consider to be a “reactionary response from the University.” They said, “I have concern for how it will make persons of color on and off campus feel in terms of their personal safety, even though I cannot personally speak from their perspective.”

To make the campus community aware of responses to the incident, three security alerts were sent out between 8:50 p.m. and 10:00 p.m. on Saturday. The first alert came almost an hour after the student was shot in the torso, while the third notified the community that the student’s parents were made aware of the incident.

The timing of these alerts raised additional concerns among students fearful for their safety with the prospect of an active shooter on campus. At Sunday’s second press conference, Snyder and Hodge addressed this issue.

Snyder said she had not been made aware of the situation until about the time the first alert was sent out, while Hodge explained that the department’s priorities were to first tend to the student, and second, warn the campus community. He said that moving forward, CWRU Police will be more proactive in warning students to avoid areas on campus if need be, but ultimately the department will ensure the victim is helped before alerts are sent out.

Students’ rights to bear arms for self defense purposes was another topic discussed at Sunday night’s follow up broadcast, and Snyder said the University does not support the notion, citing a Johns Hopkins University study which found firearms to be ineffective means of protection amongst students on college campuses.

Tyler Thieding, a third-year student, disagreed with the President. “I would feel much less vulnerable if I had a weapon to protect myself, especially when walking by myself after dark in areas with minimal security or police presence,” he said. “I pray that I’d never have to use force against a perpetrator. However, simply knowing that students may be armed and willing to defend themselves would incentivize criminals to search for other targets.”

According to Undergraduate Student Government (USG) President Maya Rao, USG has not yet spoken with the central administration regarding the incident.

“I think the University has improved greatly in terms of response to crisis situations,” she said, “however, there is still work to be done in terms of ensuring that non-personnel based forms of safety are held to a consistently high standard. We hope to further discuss the topic of safety and security in our upcoming [executive] meeting and our General Assembly on Tuesday, and we should have more information on any forthcoming action afterwards.”

Rao said that USG is also working on several initiatives which address issues tied to Saturday’s shooting, including lighting on campus, real time updates for Greenies and shuttles, increasing the University’s Safe Ride fleet, advocating for more prompt and informative alerts and expanding transparency between CWRU Police, the administration and the student body.