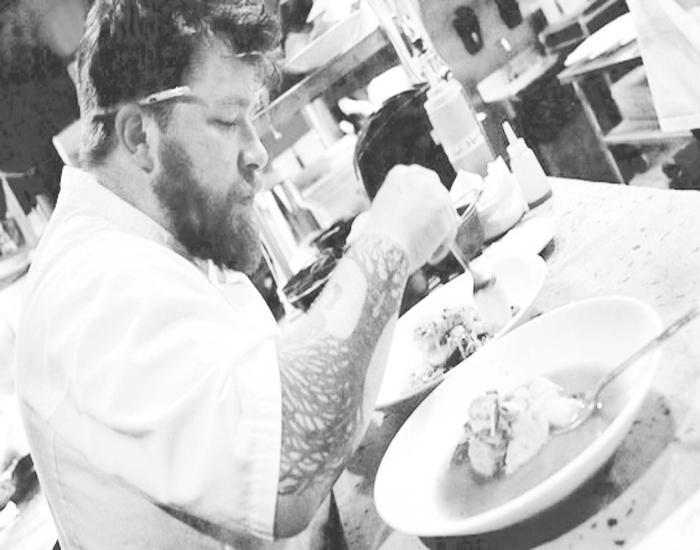 A 15-minute ride on the RTA Healthline is the only thing separating you from a meal that is sure to be one-of-a-kind. Located on lively E. 4th street in the heart of downtown Cleveland, the Greenhouse Tavern sits a stone’s throw away from places like The House of Blues, Corner Alley Bowling, and the historic Cleveland Arcade.

The Greenhouse Tavern is a Jonathon Sawyer restaurant. Sawyer, a Cleveland native, has appeared on “Iron Chef: America” and is a good pal of Michael Symon, one of his former celebrity employers under whom he served as sous chef.

The Tavern was recently named one of the Top Ten Best New Restaurants in the United States and was the first certified “green” restaurant in Ohio. The cuisine is French gastropub, with seasonally inspired flavors. As you enter the restaurant, the antique French “pub-like” atmosphere mingles with modern finishes, much like the items on the menu. Let your eyes wander from the giant paintings on the wall to the bicycle tires mounted high above throughout the restaurant.

Visitors have the option to dine at what is known as “The Chef’s Table,” located directly beside the kitchen with only a bar in between. You will see chefs from the back coming out to the record player to change the music being played in the restaurant.

No detail is left unaddressed, especially when it comes to the cuisine. At first, the menu seems overwhelming. Dining at Greenhouse Tavern requires you to venture out of your dining hall comfort zone. Whatever menu items you choose, you will not leave unsatisfied or underfed. With savory sauces, sautéed vegetables, and many other things you probably don’t know how to pronounce, a fine dining virgin may be a bit apprehensive.

Greenhouse Tavern emphasizes organic foods and sustainability. Helping to dissect the simple but uppity menu, let’s start with libations. They don’t have the usual Coke or Pepsi products. They offer a small company’s line of sodas that taste even better than the sugary staples. If you’re into living on the edge, there is a fabulous array of bottled juice concoctions in a wide assortment of flavors.

For those over 21, don’t expect Barcardi or Three Olives on the shelves. The liquor is also from smaller companies, and each bottle is hand-selected by culinary masterminds.

The drink menu includes 17 pages of selections sure to quench any thirst. The food menu, a whopping single page piece of paper, is sure to please your palette. It is printed on recycled paper and divided into firsts, seconds, thirds, and halves. If you’re feeling really hungry, or your eyes just think you are, you can also sample the lot of it with the Four-Course Chefs’ Tasting Menu.

Some stand-out menu items include: crispy chicken wings confit with roasted jalapeno, lemon juice, scallions, and garlic; pan-fried pork chop saltimbocca with sage, country ham, and gravy; and fabulous pommes frites with garlic, rosemary, and aioli. There are also plenty of spectacular options for vegetarians and vegans that even meat-eaters will thoroughly enjoy.

After finishing your dinner and wanting to lick the plate clean, ordering some dessert is the logical thing to do. Skipping out on dessert at Greenhouse will only be a disservice to you. They serve Jeni’s ice cream, made in Columbus, Ohio. They cycle through many flavors throughout the year, none of which I wouldn’t recommend. Among seven other dessert options, one of which is specifically vegan, is the Dobos Torte, a seven-layer vanilla cake with chocolate butter cream, meringue, and citrus. Pairing any of the desserts with a cup of the house coffee is a match made in heaven.

You may be wondering if you’ll have to take out another student loan for your meal out. Although some sticker shock may occur, there are ways to keep your meal cheap. On the other hand, if you’re on a fancy date or just sick of food at Grab-it, you may decide to splurge on a memorable meal outside the University Circle bubble that is worth every penny.