This Week in Eldred Blackbox: “The Shape of Things” 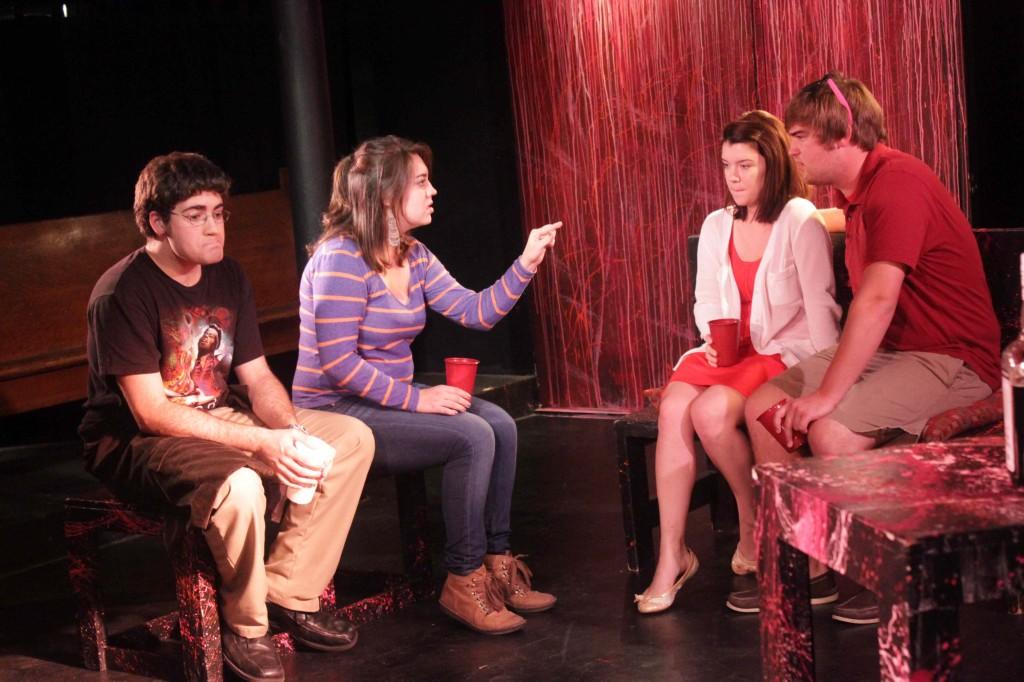 A human being is a work of art. The skin, blood, organs, thoughts, and personality are all colors of a palette. With a quick flick of the wrist, the minor imperfections – the birthmark, the oversized nose, the scars – can all be erased.

The personality can be changed. Health habits can be improved. Human beings can be shaped, formed, and molded into objects of perfection. It is this very concept that “The Shape of Things” by Neil LaBute seeks to address.

The play presents the story of Adam Sorenson, a meek museum guard who meets Evelyn Thompson, a fine arts master’s student working on her thesis. Adam interrupts her while she is liberating the “realness” of a statue by drawing a penis on it.

She takes a liking to the bashful curatorial guard and they begin dating. Over time, Evelyn’s influence becomes apparent as Adam changes his wardrobe, hairstyle, eyewear, eating habits, and even gets plastic surgery. Despite all the positives, Evelyn’s influence has its drawbacks, straining his relationship with his two friends, Jenny and Phillip.

I was granted the opportunity to sit in on one of the dress rehearsals for the Case Theater Society’s production of the play. Despite the small size of Eldred’s Blackbox Theater, the set, awash in a Pollock-esque backdrop of shades of red, provides an excellent atmosphere of artistic ambiance with a touch of malignancy added by the dim light. Thomas Burke’s Adam is a meek and mild gentlemen, embodying the “lovely person” described by Adam’s friend Jennifer. Tana Marquez is a mysterious and eccentric Evelyn.

Throughout, she walks a wonderfully fine line between brilliant and maniacal. Kelsey Petersen’s Jenny, by contrast, is the genuine and innocent fiancée of Phillip, who, played by Frank Blackman, bellows with emotions as he confronts the woman he sees corrupting his friend.

One of the most interesting aspects of last night’s run was seeing it in its unfinished form. I got to see not only the play itself, but also the transformation of the actors into their characters – of the Blackbox Theater into an art museum.

The process itself was fascinating. For a warm up before the run started, the actors began by lying on the floor with their eyes closed, then, as in a trance, they began to sing. Rising from the floor, still singing, they began to walk around the stage, slowly transforming into the characters they were about to portray.

They ended; eyes now open, by enacting bits of dialogue from the play. Director Thayer Juergens explained that another method he has used to get the actors into character is to enact so-called deleted scenes in which the actors portray what might happen after a scene from the play is finished, the success of which can be seen in the immersive portrayals the actors provide during the play.

The whole process was very intriguing, seeing the production in an almost but not quite finished form. The whole play is deconstructed, as if one were viewing the both the skeleton and the full, fleshy form at the same time. One becomes immersed in the play, watching the characters almost as if they were real, only to be pulled back from the illusion by a short word from the director as he fine-tunes the minute details of the production.