Those are some foxy shazams! 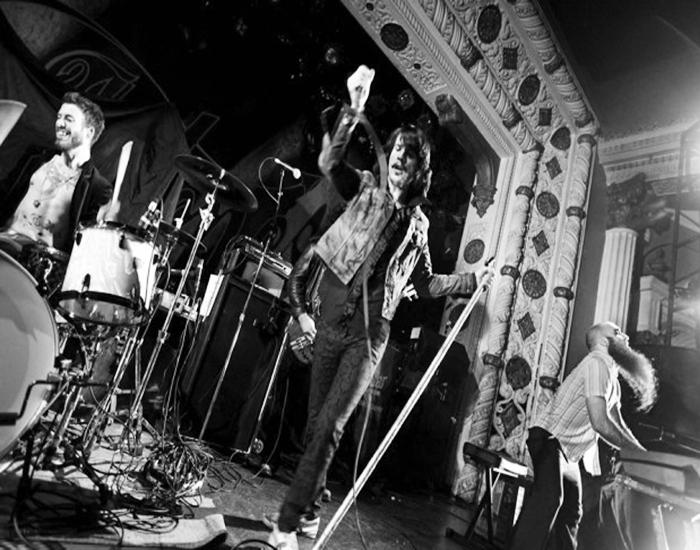 With a name as catchy as their tunes, Foxy Shazam is finally gaining some of the attention they deserve. The six-piece from Cincinnati, Ohio has been touring with British rockers The Darkness since November 2011. The Darkness is a true rock and roll band, and Foxy Shazam follows their example well.

The best way to experience Foxy Shazam is live. They have been performing in front of sold-out crowds across the U.K. and Canada in addition to cities in the eastern and mid-western United States. Last weekend they played two sold-out shows back-to-back in Detroit and Chicago.

The band is something of a motley-looking crew. On keyboard is Schuyler Vaughn White, who sports a shaved head and a beard at least foot long. Lead singer Eric Nally looks like he could share pants with a 100-pound model. Don’t let his soft black hair and tiny waist fool you, though – the man has the energy of an atomic bomb. His performances have included doing somersaults across the stage, jumping on the guitarists’ shoulders during solos, and eating handfuls of burning cigarettes.

The band’s on-stage antics are backed up well by their musical talent. Foxy Shazam has released three albums since their debut in 2005, their most recent being “The Church of Rock and Roll.”

Their single “I Like It” boasts a bass-heavy riff and a chorus to which you can’t help but sing along. Proclaiming his love for large African American buttocks, Nally’s voice goes from deep and seductive to high and energetic.

Nally uses his music to communicate with not only fans, but family as well. The slow melodies and soft vocals of “Forever Together” describe his absence from family as somewhat melancholy despite his love for performing. In this song he directly addresses one of his sons, which he does in other lyrics as well.

“I Wanna Be Yours” begins with a punchy acoustic riff supported by smooth bass and snappy percussion. The sweet and bouncy chorus accents Nally’s vocals before the song plunges into a sharp electric guitar solo.

The standout song on the entire 11-track album, outside “I Like It,” is “Wasted Feeling.” The song showcases the uppermost parts of Nally’s range – the softness of the verses contrasts startlingly with the feverish energy of the chorus. This song is a prime example of the unique flavor that Foxy Shazam brings to the current rock and roll scene. Trumpet plays a central role in the chorus, with brassy beats playing off the smooth guitar riff.

Foxy Shazam also features a strong piano presence, something that seldom appears in popular music anymore. “The Streets” relies heavily on throaty bass and buzzing trumpet, with piano accenting the vocal strength of the chorus.

In case you’re wondering what a Foxy Shazam is, Nally describes it as a phrase used by kids at his predominantly African American high school to refer to “cool shoes.”

Foxy Shazam will be headlining their own tour starting in April, and if you like their studio sound, it is worth the out-of-state drive to see them perform live.