Bose: Thoughts of a graduating senior

What I learned from my CWRU experience 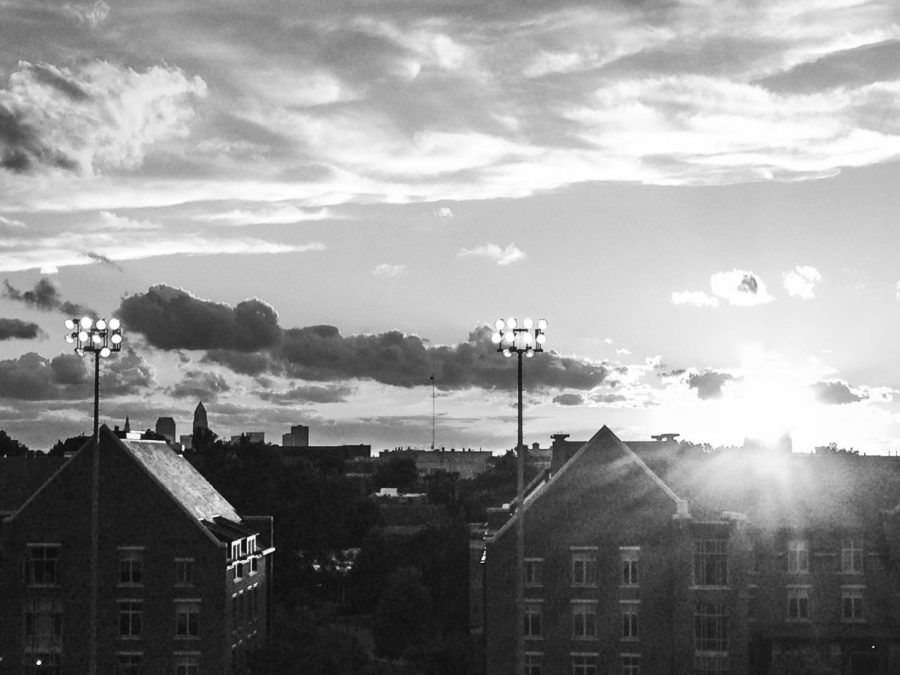 As the sun sets on your experience at CWRU, there is a lot of time for reflection.

As the sun sets on my undergraduate experience at Case Western Reserve University, I’ve spent a good amount of time reflecting. College is incredibly dynamic, a fast-paced amalgam of highs, lows and unique individuals and experiences not found anywhere else.

Much of my retrospective thought has served to answer the following questions: “Have I made the most of this experience?” and “Would I do it again?” Answering the former forced me to ask myself another question, “What am I supposed to gain out of college?” After deep introspection, often in the shower, the overarching answer to me came as one phrase: “Personal growth,” which can mean different things to different people. It can be gaining knowledge, meeting new people or adopting new approaches to life’s challenges.

Most importantly, it’s a never-ending task. Although I feel like I’ve learned how to be a better student, friend and contributor to society,  I still have a long ways to go. As a result, I think the greatest skill I learned in the past four years was self-awareness.

As I set up my dorm room in Taplin House in 2014, I could have never prepared myself for everything that would be thrown at me. Brimming with high-school confidence, I took on 18 credits and a plethora of extracurriculars while leading an unhealthy lifestyle of Netflix-binges, 3 a.m. The Den by Denny’s visits, and surviving the usual chaos of 40 teenage guys on a floor together. As much fun as I had, I was completely burned out by December and wanted nothing more than to go home and sleep for a solid month. For me, my first-year was all about learning my limits.

By my second year, I could moderate my leisure time and focus on advancing my academic life. Yet, despite my improved work habits, I still did not feel satisfied with my college life. I was disillusioned with classes, bored of my lab work and lacking in my social life. Ironically, my biggest takeaway from the year came from a Principles of Microeconomics class I took out of sheer curiosity.

In economics, “sunk cost” refers to costs that have already been incurred and can no longer be recovered. For many people, it is very easy to fall into this fallacy where, even though a commitment is not reaping the intended rewards, it is still pursued because of perceived sunk costs. Learning to avoid this illusion was one of the greatest challenges of my college career.  It’s easy to be scared for the future and as a result maintain unhelpful but familiar habits.

But it’s impossible to achieve personal growth without going beyond one’s comfort zone. With this in mind for 2016, I changed my major concentration, left my research lab and completely swapped all of my extracurricular activities. As terrifying as it was at first, all three changes were some of the best decisions I made as an undergraduate.

Freeing up my time and energy allowed me to find opportunities I was genuinely passionate about. That summer, I landed my first paid internship in Seattle, and spent my weekends exploring the west coast alone. In the fall, I joined a fraternity and later the Editorial Staff of The Observer, two things I had curiosity in, but never took the initiative to do.

Now, as much as I want to say life was smooth sailing from here, third-year biomedical engineering got to me. Crushed by an intense course-load, the pressure to find summer work and an expectation of upperclassmen leadership, I fell into an anxiety-driven downward spiral. Without my previous safety measures, I was barely staying afloat thanks to weekly University Counseling Services (UCS) visits.

Trusting my past lesson of drastic but necessary change, I made the critical decision to leave CWRU for six months.

My moral for 2017 became making time for myself. In retrospect, I was unbelievably lucky to find a co-op at a medical device company just 30 minutes from home. Six months of working a nine-to-five with no homework was like therapy for me. Although I was more-or-less socially isolated, it gave me time to reflect on my life and what I really wished to achieve.  I spent time around coworkers who were stable and successful adults, and their advice allowed me to develop healthy and productive habits.

This past January, I returned for my final semester at CWRU, thoroughly rejuvenated. I was excited to be back, but also ready to move on. That high has carried me into my final week as an undergraduate, the point from where I can now write this.

Going back to my opening questions, I am wholeheartedly convinced that I made the most out of my CWRU experience. It was difficult, but I believe it is representative of the challenges I’ll encounter in the real world. And as opposed to when I was seventeen, I am now prepared to face them.

“Would I do it all over again?” Yes. There are, of course, some things that I would’ve done differently. But if I look at where I am now, what I have ahead of me and who I have with me, I wouldn’t want it any other way.

With these final words, I would like to thank the people who have been with me the past four years and made my experience one-of-a-kind. You are, beyond all else, what makes CWRU shine on forever.

Shounak Bose was the web editor for The Observer for the past year and a half. He enjoys browsing Reddit and posting memes on the page: “Case Memes for Academically Challenged Beans.” He will be attending graduate school at Tufts University next year.