Why do leaves change colors during autumn? 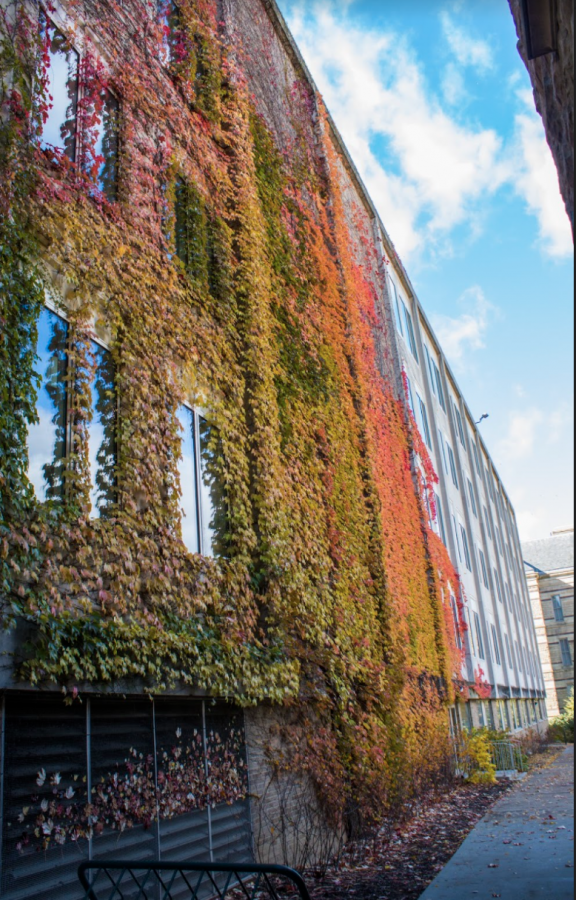 The side of Millis Hall covered in colorful ivy showcases the beautiful autumn leaves on CWRU's campus.

From the beginning to the middle of October, trees around Case Western Reserve University are turning bright shades of red and orange. Outside of The Village at 115 Complex, sugar maples are shedding their leaves, decorating the pavement in swathes of autumnal colors.

It’s not uncommon to see trees within urban areas—scientists have associated the presence of green spaces with numerous environmental and physiological benefits. Courtney Blashka, a forester at Holden Arboretum, educates the public frequently on how trees can influence the urban environment we live in through moderating temperatures and filtering particulates in the air.

“Trees serve an important job in cities, where asthma is very high and pollutants and chemicals are floating around in the air,” Blashka noted. “In terms of providing health benefits, they provide shade, reducing the amount of UV exposure, so they prevent skin cancer and other sun-related issues. They clean the air, provide oxygen, pull carbon dioxide and pull noxious chemicals out there.” Notably, cities which have green spaces report better air qualities than cities which don’t. According to a news report by the BBC, trees can reduce toxic air particulates by 25%, preventing 11,000 to 36,000 deaths from lung-related diseases. In addition, during warmer seasons, green spaces are much cooler than darker, paved surfaces and can benefit urban communities without cooling systems, such as the homeless population.

Trees serve to moderate the environment we live in, but Blashka explained that canopies can elicit emotional responses too, improving the mental health of residents. A scientific study from University of Aarhus found that for adolescents who grew up near green spaces, their chances of developing a mental illness later in adulthood was reduced by half compared to adolescents who didn’t. Blashka reported that trees can have large short-term impacts, inducing a calming atmosphere in shopping malls, college campuses, neighborhoods and even on freeways.

“Trees provide buffers on streets, calming traffic. It’s why we have barriers along the lane; it hasn’t become narrower, but it gives that illusion, making people drive slower. It increases property values: People want to have trees on their property, and they can boost property values. As urban foresters, we notice these things,” Blashka said.

During autumn, small differences in temperature and sunlight exposure cause colorful displays around the world. The axis of the Earth is slightly tilted at 23.5 degrees, causing seasons when our planet revolves around the sun. If the Earth wasn’t tilted, light would be equally distributed at all times of the year––the slight tilt causes unequal exposure to sunlight, creating temperature and light changes.

During autumn, trees receive less sunlight, limiting their ability to create energy. When the chlorophyll, a green pigment within the leaf that is responsible for capturing light, isn’t used as much, it begins to break down.

“Each leaf is loaded with chlorophyll, which absorbs light and converts carbon dioxide into energy through photosynthesis. There’s less and less sunlight right now, [which] comes with cool temperatures, which freezes the liquid in the leaf,” Blashka said. “When chlorophyll breaks down, the other pigments [can] be expressed, which are lying underneath. Those pigments are carotenoids, producing a yellow and orange hue. And most of the time, the chlorophyll overpowers this. All these other bright, toned colors start to show. And there’s another pigment, anthocyanin, that gives the bright red colors.”

As winter approaches, trees enter a hibernation period, losing the nonessential leaves to preserve energy. During winter, when trees receive the least exposure, trees do not photosynthesize, choosing to instead preserve water and light. “That’s why you see a waxy covering, preventing them from desiccating during the harsh winter winds. The processes slow down, they don’t shut down, but they slow down. That’s where we’d look for things like buds or twigs,” Blashka said. In contrast, evergreens, which include the popular Christmas tree, have waxy, antifreeze-containing needles to retain water throughout the entire year.

This process, in which leaves reveal autumnal colors for a month before they fall, occurs for most trees around the world. Different types of trees, however, may show different colors at different times. When asked which species viewers should look out for, Blashka noted, “Red maples are spectacular; they turn a fiery color. Sugar maples become orange. Sugar and red maples are the real show stoppers, along with sweet gums and ginkgos, which turn a brilliant yellow.”

Different adaptations within these species may cause these pigments to show at different times and at different intensities. Some trees at higher elevations may continue to photosynthesize much later in the season than other trees. “It’s why when you go south to the Carolinas, the leaf colors are red in late November, whereas in Vermont, it might have already peaked. There are fall foliage calendars, where areas have already reached peak,” Blashka said. Within Ohio, she reported that foliage should be at a peak within the upcoming week.

While this phenomena occurs annually, many individuals have noted that the process of entire canopies turning bright red or yellow within the span of weeks is more remarkable than usual. While walking or looking through a window, individuals working from home are drawn to the beauty and complexity of our natural environment. As a community forester, Blashka noted, “The silver lining of [COVID-19] is that people are paying a lot more attention to their surroundings, noticing things [they hadn’t] in the past and finding delight in the simple processes that have been happening around us all along.”