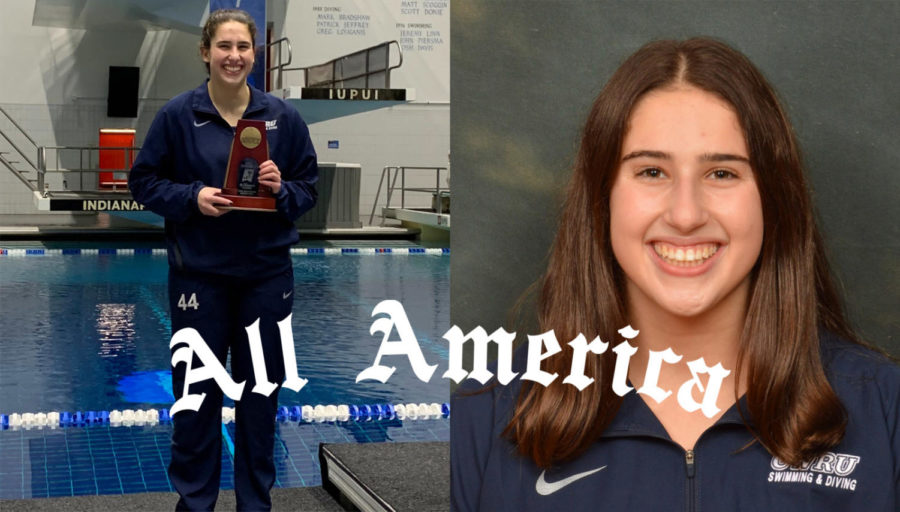 In an interview with the CWRU Athletic Department, Wilkov said, “I’m really excited. This is definitely a unique experience, and it’s really cool to be able to dive at the national level for D3, and I’m excited to just show what I’ve got.”

Chuang talked about the changes from the last season due to the pandemic and how they affected the team’s approach: “I really didn’t know what to expect coming into the season… [It had] been a while since I’d gotten the chance to race, but I think I really surprised myself to say the least. I’m really excited with how the team did … and it wouldn’t have been possible to be where I am without the guys around me, girls around me to push me to where I am … I’m just happy to be here and be able to have gotten this far.”

Head Coach Doug Milliken discussed how successful this season has been: “Having three athletes qualify for the NCAA championships is spectacular … Having … a male swimmer, a female swimmer [and] a female diver [and] having both swimming and diving represented there is not easy to do … Only 17 programs in the country are represented by both male and female swimmers and then diving as well … It’s nice to see for our program that we’re able to kind of bring a full package … so I’m really excited about it. “

On the first day of the tournament, Halsdorfer and Chuang got right to work at the Indiana University Natatorium. In the 500-yard freestyle, Halsdorfer notched a time of 5:03.76 to take 37th place in a field of 54 athletes. Originally, Halsdorfer had qualified for the event with a 5:01.45 time at the 2022 UAA Championships and was thus seeded 33rd. Taryn Wisner of Denison University won the championship with a finals time of 4:48.55.

Chuang, meanwhile, competed in the 200-yard individual medley. He finished with a time of 1:53.02, coming in 47th in a field of 50 swimmers. Chuang qualified for the event at the Magnus Cup earlier this year where he tallied a 1:52.72 finish. Garrett Clasen of the University of Chicago took first place with a finals time of 1:46.19.

Halsdorfer opened the second day of competition in the 200-yard freestyle. She finished 47th among 59 athletes after completing the distance in 1:54.75. She had originally qualified for the event with the 44th seed after swimming 1:54.49 at the Magnus Cup. Claire Brennan of Tufts University took the championship with a finals time of 1:48.46.

Wilkov made her NCAA debut on day two for the one-meter dive. She earned a score of 347.60, placing 24th out of 29 athletes. Wilkov had qualified for the event at the NCAA Diving Zone Regional meet with a score of 405.40, coming in fourth place then. Elizabeth Cron of UChicago was named the winner with a finals score of 487.40.

Only Chuang competed on the competition’s third day. He battled in a pool of 34 athletes in the 100-yard breaststroke, finishing in 22nd place after swimming a time of 55.40. At the Midwest Invitational, Chuang qualified for the NCAA meet with a time of 54.74, setting the school record then. Luke Rodarte of California Lutheran University came away with the championship after marking a finals time of 52.71.

All three Spartans competed on the final day of the tournament. Wilkov led the way with a seventh-place finish and a finals score of 434.75 in the three-meter dive. She had originally posted 440.65 for sixth place in the preliminary round among 29 athletes. Ava Lowell of Ithaca College earned first place with a finals score of 486.45.

Chuang concluded his events with the 200-yard breaststroke, wherein he placed 18th among 35 athletes after finishing the distance in 2:01.91. The time was the third-fastest in program history and Chuang’s season best. James Hamilton of Emory University won the event with a finals time of 1:55.83.

Halsdorfer rounded out the Spartans’ competitions in the 1650-yard freestyle. She completed the distance in 17:27.53, placing 24th out of 32 athletes. She had qualified for the event at the Magnus Cup with a 17:14.97 time and was seeded 21st then. Kristin Cornish of Johns Hopkins University won the championship with a time of 16:33.24.

“It’s a really cool opportunity and I’m … happy I … have the chance to say that I was able to go  [to the DIII meet] at some point in my college career,” reflected Halsdorfer. “That’s kind of like, the top of the top level that you can get to.”

The CWRU women’s team earned 12 points, finishing 31st overall for the best CWRU finish since 2014. The men’s team did not score.