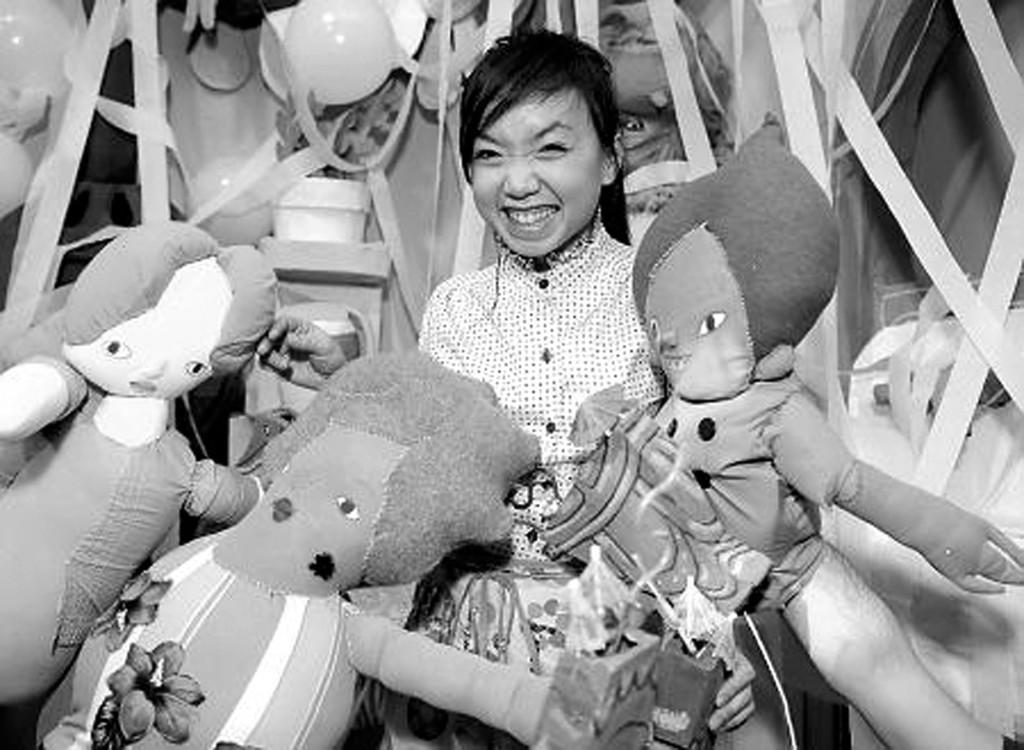 Remember in fifth grade, when your teachers made you fill out questionnaires, more often than not containing the question “What do you want to be when you grow up?” Most of us responded, “A doctor!”, “Fireman!”, or a perhaps for a (confused) few “Tiger!” However, Thu Tran creator of Independent Film Channel’s hit culinary show Food Party seemed to know her destiny at quite a young age, despite the winding road she took to get there. “I wanted to be a game show host. My hero was Bob Barker and it was my favorite show in the world when I was little,” Tran told an MTV blogger.

Thu Tran graduated from the Cleveland Institute of Art in 2005 with a BFA in glass and a concentration in printmaking and drawing, but it may as well have been a concentration in food and cuteness. Tran’s artwork is a shrine to her greatest obsession: food. Her latest installation piece revolved around creating a huge glass candy forest. She used food scented car fresheners and calming jungle noises to simulate the full surreal sweet-tooth experience. She makes sculptures of kitchen utensils and creates cardboard cut outs of Jay-Z eating cake.

“I make work that explores relationships between organic and inorganic. I strive to achieve visual MSG,” says five-foot Thu Tran. All of this experimentation throughout her undergrad, as well as her Vietnamese heritage and obsession with food, led her to make a pilot of Food Party in 2006 in Cleveland.

Food Party started out as a fake television show, whose aesthetic elements debuted at the Sculpture Center on Euclid Avenue. The project strived to combine “puppetry, cutlery, and fake mastery”. After posting videos on YouTube and receiving awards for early episodes, such as Winner of “Out of the Box Pilot” from New York Television Festival, Thu Tran was contacted by IFC to have a show on the channel. Food Party was about to join programming which included Arrested Development, Kids in the Hall, and a smattering of indie films. It was a dream made in food heaven.

Now in its second season on IFC, the show is gaining growing attention from media outlets like MTV, CBS, The Food Network, and tons of food blogs. Described as a mixture between Peewee’s Playhouse and Rachael Ray, Food Party attempts to give viewers inspiration for easy cooking. Making meals out of pre-cooked food and items found in the kitchen, Tran uses puppets and a cardboard kitchen to make all her meals. Narratives for the show are usually based around a guest coming to dinner, which could be anyone from Ninja Dog to Yoko Ono. “Ideas for the show just come from joking around with my friends,” Tran told MTV. “The show is such a collaborative process and a big part of why I do the show is to hang out with my friends all day.” Everyone who works on the show also graduated from CIA.

Now residing in Brooklyn, NY, Tran recently took a trip back to Cleveland to visit CIA, this time not as a student but as a distinguished alumnus. On September 12, The Cinematheque hosted a night of food celebration with Thu Tran in attendance, giving advice to current students and allowing fans to get a behind the scenes look at Food Party. In the 500 seat theatre, snip-bits of Food Party were played on the big screen with live commentary and discussion, and students who went had a blast at the event. Those who missed this opportunity to see one of the coolest CIA graduates on satellite TV can still catch the show every Tuesday Night at 10 p.m. Additionally, Tran’s food blog at foodparty.tv features meals from her kitchen, from out on the town, and also posts from other CIA alumni guest bloggers.