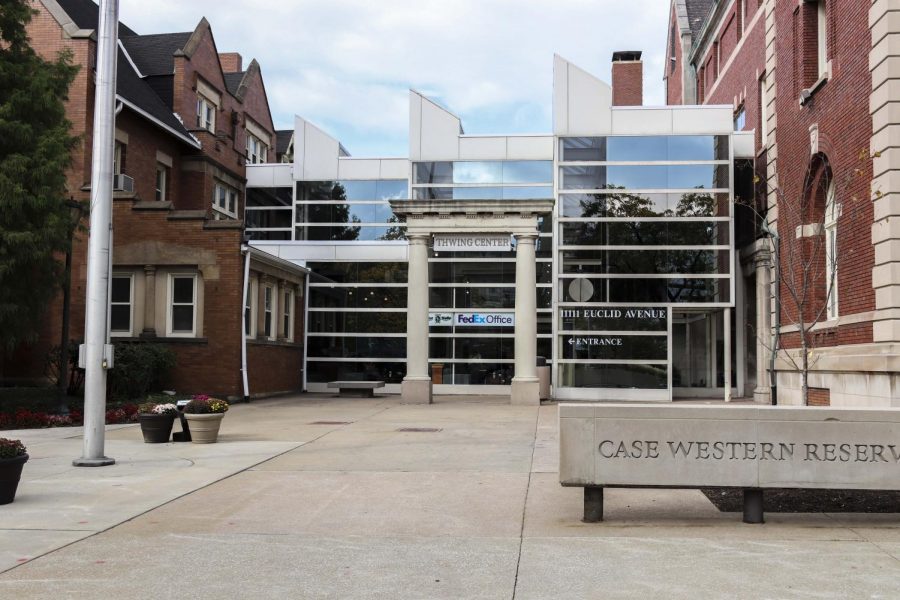 Thwing Center saw changes both inside and outside the building this past summer. The front entrance was closed and surrounded by construction equirpement at the beginning of this semester but has since opened.

At the core of Case Western Reserve University’s campus lies Thwing Center, the meeting place of many on and off-campus organizations, events and conferences, as well as the home of the Jolly Scholar. Recently, Thwing’s Euclid entrance underwent external construction after a series of changes made to the building over the last few years.

According to Steve Campbell, vice president of Campus Planning and Facilities Management, Facilities Services “initiated the renovation as part of its ongoing work to maintain campus buildings. The renovations focused on repointing exterior masonry walls and waterproofing an area of the basement.”

The Thwing Center’s vision was to create a welcoming environment from the perspective of the Euclid entrance; over the summer, this was pursued through the addition of new structural beams and entryway changes. The exterior brick resurfacing, which is now complete, continued through the fall semester. A life-sized chess set was also added to the to the atrium, and board games are scattered about the coffee tables, which double as foosball tables.

The Observer covered renovations to the building and the story behind the students that led the initiative earlier this semester. The three-year strategic plan released by the Division of Student Affairs late September identifies the building as a focal point in student engagement. Last fall, campus student leaders named it as the heart of campus.

Last year, the basement of Thwing received new vending machines and the post office was placed at the center of the atrium, immensely opening the space. The ballroom also underwent a drastic makeover with the installation of hardwood floors and Spartan-blue carpet.

While the construction is finalized for now, during the past few weeks of the academic calendar, the entrance was closed, preventing students from using the walkway directly outside. Additionally, the door was blocked from the inside.

“It was frustrating because it made it harder to get to class,” said first-year student Victoria Fan. “I’m glad the construction is done, though, and the building looks good. I think it’s especially important that prospective students who are visiting [CWRU] think it looks good, since the look of a campus is really important in the college decision-making process.”

Campbell said that aside from “maintaining the building’s existing infrastructure,” renovations will conclude for now, but the slated roof at the Euclid entrance will be replaced next summer.