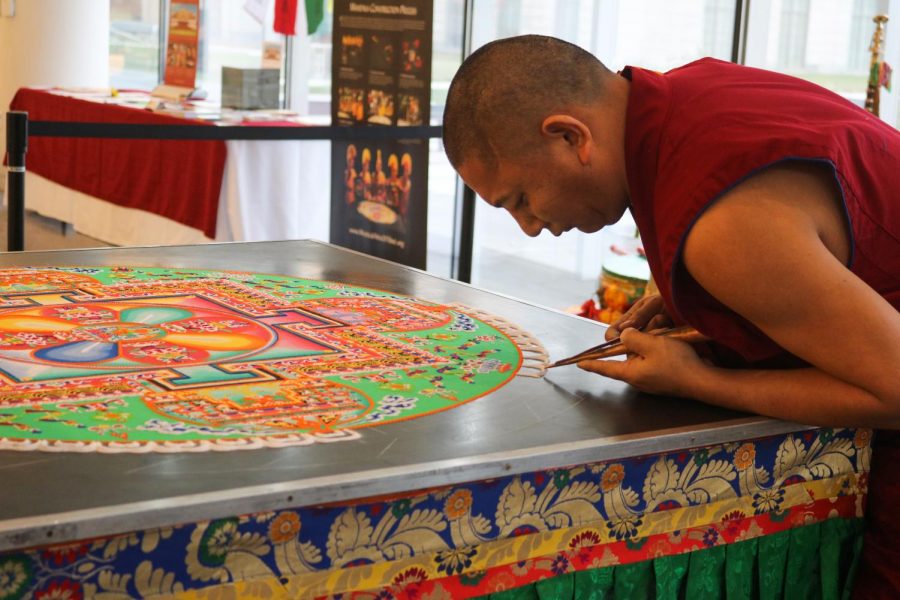 A monk uses a chak-pur, a traditional metal funnel, to pour grains of sand needed to construct the mandala.

The Mystical Arts of Tibet tour featuring the Tibetan Buddhist monks of Drepung Loseling Monastery visited Case Western Reserve University from Monday, Nov. 18 through Friday, Nov. 22. The tour is designed to emulate spiritual festivals celebrated by monasteries in Tibet, where people from surrounding villages and tribes assemble at the monasteries’ courtyards for sacred music and dance. At CWRU, the tour also involved constructing a sand mandala for students and other members of the community to see.

“The mandala is actually [a] Sanskrit word, which literally means the architecture for enlightenment,” explained one of the visiting monks. “There are many different types of mandalas and the mandala we made here is the mandala for wisdom.”

“The mandala has to be dismantled, has to symbolize the impermanent nature of our lives and it actually symbolizes that there is nothing to be attached [to],” explained the monk, describing the Dispersal of Sand, which took place on the final day of the tour. “You just observe it, you know, enjoy it. So that’s the whole process of our life, you know, everything comes into being in the beginning, then stays for a while, and then it ends by nature. So that actually shows us that everything is impermanent. Understanding the impermanent nature is the beginning of all the spiritual practices.”

The Mystical Arts of Tibet tour began in Atlanta in 1989 by the monks from Drepung Loseling Monastery in South India. Every year, a pre-selected group of monks trained in sand art, music and other rituals tour North and South America, as well as several countries in Europe.

“They get selection for one year, so this group, the 2019 group, started in January and will end this year. From here we go to New Mexico for three weeks, and then we go to Atlanta for one week, and then we go back to India,” he explained.

He then went on to describe the purpose behind their touring.

“We tour not just different universities, but different high schools, different galleries, art centers, churches and also Buddhist temples to promote world peace and harmony through our centuries-old Tibetan culture and traditions, which is basically based on the philosophy of love, compassion and wisdom.”

He expressed his hope that the events would also introduce their audiences to Tibetan traditions and cultures.

“Our very precious, centuries-old Tibetan traditions and culture nowadays, in this world, is highly endangered to disappear inside Tibet, because of the Chinese occupation and repression. So that’s how we try to make awareness about the Tibetan situation facing Tibetan people, it’s culture, language, identity, everything, to an international level.”

Their visit also included a performance at the Maltz Performing Arts Center as part of the Silver Hall Concert Series. The performance included sacred music and dance.