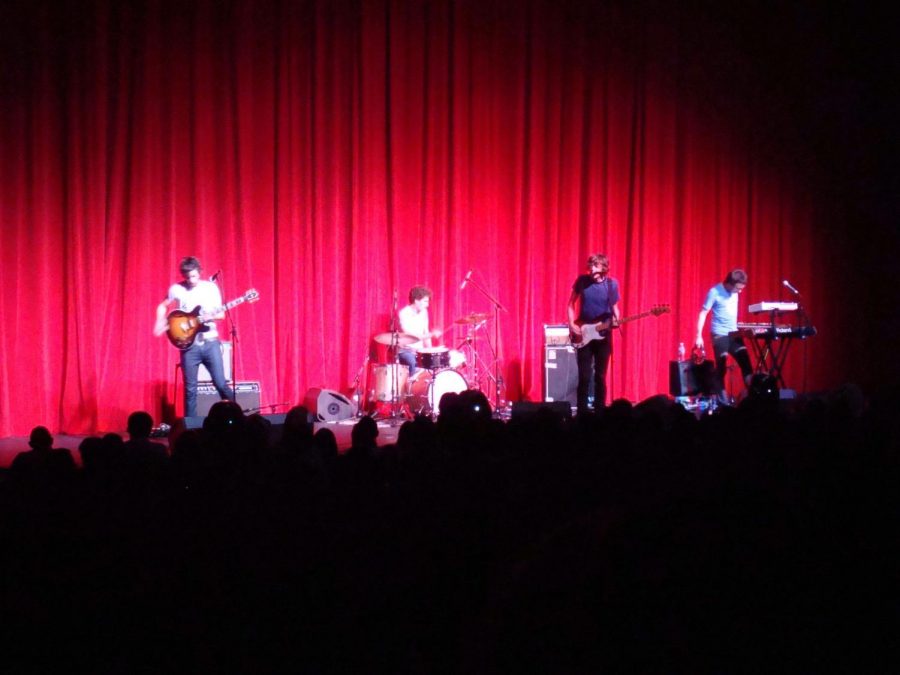 Tokyo Police Club (TPC) is a big enough name in music that most of the audience at their Grog Shop concert on Friday, March 22 knew at least a song or two. For those unfamiliar with the Canadian indie rock band, I can only imagine they assumed it was a Japanese electronic dance music duo or an underground ska-punk collective upon reading their name.

Ask guitarist/keyboardist Graham Wright where the name comes from and he’ll say: “the Internet Band Name Generator. That was a thing in the early days of the Internet, where it was like [you] go on this website and press a button and put three random words together.”

Maybe it’s this carefree attitude that allows TPC’s live performances to have such a high energy level. Having been on tour since early March promoting their latest album “TPC,” their electrifying Friday night performance showed no signs of exhaustion. Each song made the audience more excited than the last.

Opening the night’s set was local Cleveland band Runaway Brother, who were followed by TPC’s touring partner Dizzy. After just winning the 2019 Juno Alternative Album of the Year for their album “Baby Teeth,” Dizzy brought a subtle mood to the Grog Shop that had the audience wishing with each song that the end would never come. Singer Katie Munshaw’s voice was perfectly suited to the airy notes of the guitar and the sharp, soft beats of the drums. The deep red lighting on stage wrapped the performance in an ethereal feel.

TPC came on stage after an intermission that felt more like an evening-long hiatus. But when they came on stage and without a word of introduction dove into their first song, guitars flailing and lights changed to a bright orange, it was as if they never left. Throughout their set they traversed a variety of styles, from racing rock-and-roll riffs to calypso-like grooves and shoegaze-esque melodies.

The band had an undeniable onstage chemistry, fueling each other’s performances, which is the only thing that can explain how they jumped and danced across the stage, song after song, without tire. Often times the three in front—Wright, bassist/singer David Monks and guitarist Josh Hook—would join forces and play standing inches away from each other, crouched, ears touching as if they had been born playing music together.

And indeed, they basically were. The four of them, the last member including drummer Greg Alsop, were friends before they were musicians, meeting each other at just 10 years old. Wright sat with The Observer before the concert to talk about how they formed the band, their musical development, the music industry and more. Here are some selected questions and his responses to them.

(Note: The responses below have been slightly edited for clarity and readability.)

You’ve stayed together for over 13 years, which is quite an achievement. What is the dynamic like?

“I’m too close to it to know what the dynamic is. We’ve been friends for twice as long as we’ve been in the band, and it’s pretty comfortable, and I think we read each other pretty well, pretty instinctively. I don’t think about it that much, but we don’t have to, luckily. Bands have to be more conscious of diplomacy and relationship management, and it is a [very intense] relationship—it’s familial, it’s creative, it’s financial—every kind of relationship you can have with someone, it’s [that] times four. So there’s a lot that can go wrong but if you’re on the same page and if you all just feel each other out well, then for the most part it’s easy.”

How did you meet?

“We all went to the same school since we were 10 years old, and we never stopped going to the same school … by the time we had started a band we had already been friends for so long that if we were going to start hating each other, it probably would have happened by then.”

How does your band’s creative process work? Who contributes what to songs?

“It really changes from album to album, from song to song and from day to day. I’ve never been able to put our band creative process in any kind of useful short enough description to be worthwhile.”

“Now? Wonderful. It’s my favorite thing, but it honestly took me seven or eight years to figure out how to do it. It’s a weird lifestyle. It’s not for everybody, but I think there’s no job in the world that’s easier than that—like, wake up in the morning, sit in a van, play guitar and drink beer. Like ‘oh, I’m tired, the show is lame, the lobby call was early—’cry me a river, people have kids.”

[You came out with] “Champ” [in] 2010. Then there was a four-year period between “Champ” and “Forcefield.” Can you talk about that?

“By the time we had finished touring [“Champ”], it had already been two years, and we were exhausted … and then we just went—we’d never really gone down a deep creative hole where we just kept trying to reinvent and reinvent and chase our tails—just when we thought we’d written 10 songs, the tenth song, we’re like ‘this song is so much better than the other nine. We’ve got to write nine more that are this good.’ That would happen again and again, and we generated 60 or 70 songs in the process … at the time, we were like ‘we nailed it. This is a grand slam.’”

How do you keep yourself—your style—unique in a time when people latch on to a certain pattern?

“You just do your best. Honestly, the more you think about it, the worse off you probably are. If you’re writing a song, and you’re like ‘are you sure we’re being unique enough?’ then you’re going to [mess] up the song real bad. You have to hope that the apparatus in your brain that makes decisions is well tuned. I mean, all music is a ripoff now, and maybe it always has been. There’s maybe 10 actually innovative artists in the history of rock and roll … the rest of us we’re just standing on the shoulders of those who came before us.”