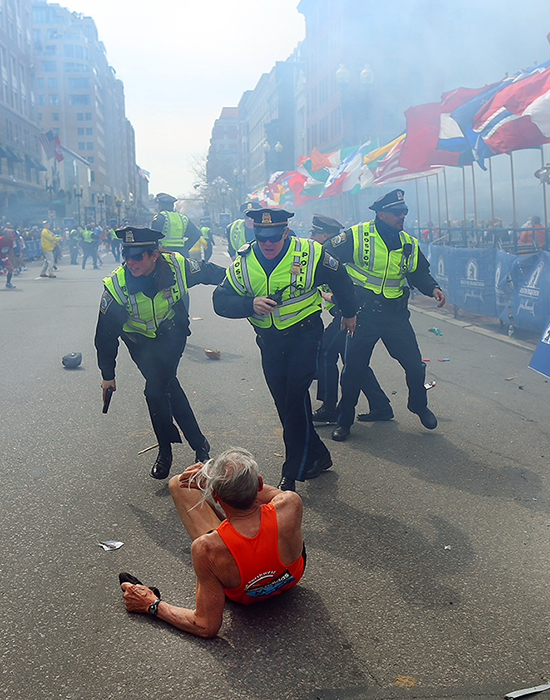 photo by John Tlumacki / The Boston Globe via Getty Images

Police react to the second explosion at the finish line of the Boston Marathon. Three people were killed and over 170 were injured in the blasts. Kelvin Smith Library staff member Rich Wisneski was at the bomb site only moments earlier.

Rich Wisneski was euphoric. On Monday, with perfect weather for running, the Kelvin Smith Library acquisitions and metadata services team leader had set a personal best at the Boston Marathon. It was his fourth time competing at the event, and Wisneski had never seen crowds so thick, numbering in the hundreds of thousands, lining the streets.

With his friends having several miles to go, after a quick stop at his hotel two blocks away, Wisneski went back to the finish line to watch more of the race.

Pulling his phone out, he snapped a few pictures. He was interrupted by a text message telling him to go back to the hotel, since the rest of his group was finally there.

About 10 minutes after Wisneski left, around 2:50 p.m, on Monday, two explosions ripped through the finish line of the Boston Marathon, leaving three dead and over 170 injured. Built from pressure cookers and shrapnel, officials say the bombs responsible were not designed to frighten, but rather kill, in the worst bombing on United States’ soil since 9/11.

As of press time, reports have indicated that authorities have a suspect, but that no arrest has been made.

Investigators studying surveillance videos said that there appeared to be a person carrying two backpacks leaving the area after the bombs went off, but they do not yet know whether the individual was related to the attack.

Pictures from several major media outlets have shown two seriously wounded, only feet away from where Wisneski had been standing.

Instead, Wisneski witnessed the blasts from his hotel room. He knew something was wrong after seeing a funnel of smoke. The second explosion shook the building.

Pandemonium erupted in the street below, with medical officials and police rushing to assist the injured. Wisneski’s building went into lockdown.

He was unharmed, but the next challenge he faced was contacting loved ones. Cell phone service in Boston was jammed by the government for several hours to avoid detonation of another bomb by a cellular device.

Wisneski was ultimately able to call his wife and family, but described the situation as “surreal”. Monday’s events still shock him. He says that he hasn’t had really any thoughts of “what-if;” he is still trying to wrap his head around what happened.

“What can you say?” Wiseneski asked. “You never in your wildest imagination imagine something like that happening at a marathon, especially Boston’s.”