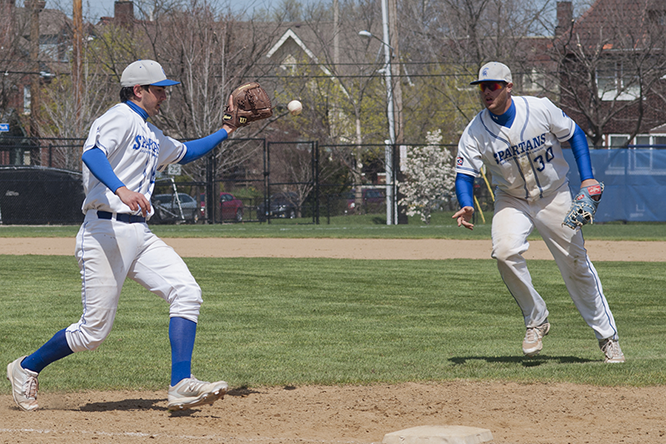 A year after finishing second place in the University Athletic Association, the Case Western Reserve University baseball team finally won a conference championship. The Spartans continued a meteoric rise in the association standings, clinching a share of the conference championship with a 5-3 record in UAA play. Although the Spartans ended up sharing the title with Washington University, Case beat the Bears in both of their meetings at the UAA Championship. The title was the first ever for the program and was highlighted by four players earning All-Tournament honors for their performances. Seniors shortstop Matt Keen, pitcher Jarrett Gish, and centerfielder Paul Pakan all were honored along with freshman pitcher Neal Krentz.

The program, which has seen its record win totals increase each of the past four years, will look once again to setting a record this season. The Spartans currently sit at 23-10, four wins away from last year’s record of 27 wins with nine games remaining. A top team in the UAA in both hitting and pitching, the Spartans have continued to excel through the non-conference schedule. The team, which has won seven of its past nine games, will have to like its odds for topping that record and earning a bid to the NCAA Championship.

The men’s tennis team has rocketed up the Intercollegiate Tennis Association’s national and regional ranking this spring. The Spartans began their season with high expectations after a third place UAA finish in 2012. Entering the 2013 season with a No. 17 ranking, the best in program history; the Spartans opened their season against a gauntlet of top 30 teams. Winning the first 12 matches of the spring, the team shot up into the top ten, achieving a record ranking of No. 7. A brutal spring break trip dropped them slightly in the rankings but the team sits comfortably at No. 13 as they head into the UAA Championship Tournament with the No. 2 seed. The No.2 team in the ITA’s Central region, the Spartans will face a tough UAA field that features five top 30 teams this weekend.

Leading the Spartans are a quintet of centrally ranked players. Freshman Christopher Krimbill is 22-9 in singles and is ranked 11th in the Central Region. Sophomore Will Drougas is the Spartans’ other ranked solo player, having gone 21-11 for a rank of 15th. Juniors John Healey and senior Nicholas Howe are 7-4 in doubles and the second ranked tandem in the region. Krimbill and senior Kyle Gerber are 12-2 as partners and are ranked 11th.

Following a season where she led the UAA in scoring, senior guard Evy Iacono became the second Spartan to be named an honorable mention All-American and the conference’s Most Valuable Player. Iacono raked in 17.9 points per game for 447 total points this season, second in program history. Iacono finished her career as a Spartan third in points scored, tied for first in three-pointers, fifth in field goals made, and sixth in steals, free throws made and assists. Iacono played a key role in Case’s first ever win in 25 years over Washington University when she led the team with 23 points, five assists, and three steals in a 72-68 win over the then No. 7 Washington Bears.

Iacono helped lead the Spartans to their best season in the past decade as they finished 16-9 overall and 8-6 in the UAA, wrapping up as fourth in the conference. The 16 wins were the most in program history since the 2001-02 season when the Spartans went 20-9 and made the NCAA Tournament. The Spartans have now had five winning seasons in the past six years.

The Case Western Reserve Fighting Gobies, otherwise known as the Ultimate Frisbee team, took 4th place in the USA Ultimate Ohio Conference Championships, an improvement of three places over their 2012 finish of 7th. This also gained the Gobies a trip to the Ohio Valley Regional Championship on April 27th and 28th at The Ohio State University where they will play top teams from Ohio and Pennsylvania for a shot at the National Championships in Madison, WI. The Gobies went 5-0 on the first day to the tournament, beating Cleveland State, Dayton, Akron, Toledo, and Ohio State. The weekend ended on a sour note as Case dropped both games on Sunday to Ohio State and Cincinnati to take 4th place.

The USA Ultimate College Series is the playoffs of a season that saw the Gobies take 3rd place at University of Kentucky’s Cat Fight 2013, riding a 3-1 record on Saturday to finish the weekend 6-2 and beating Indiana in the 3rd place game. The Gobies also took 2nd place at Chicago Invite, a national tournament featuring over 60 college ultimate teams. The Gobies fell to the Oregon State Beavers after a whirlwind weekend with wins against Michigan State, University of Missouri, University of Iowa, and North Texas.
The team hopes to keep improving on these results starting next fall as they will be returning most of the team as seniors next year.

The men then traveled to the LaVern Gibson Championship Course in Terre Haute, Indiana where they competed at the national championship for the first time since 2008. The team scored 736 points led by Kelly’s 128th place finish. Other runners for the Spartans were David Dixon (137th), Phil Yeung (221st), Anthony Spalding (236th), Timothy Travitz (251st), Ethan Teare (260th), and Dishen Lin (268th).

Two years after finishing their third straight winless conference season, the Case Western Reserve University softball team looks to keep improving under third-year head coach Josie Henry. The Spartans have won gone 3-5 in each of the past two conference championships and with an extremely young roster; the team looks ripe for improvement. A third place finish at this past year’s UAA Championship set the tone for the Spartans this season as the team has dominated their non-conference schedule.

With eight games to play, the team currently sits at 20-13, six wins away from last year’s win total, the second most in program history only to the 2001 squad’s 31-10 record. The team has to like their odds with six of their last eight games at Mather Field where they are currently 6-0. Home field advantage has been a huge benefit for the team the past two seasons, with an 18-6 record. In fact, the only thing that can beat the Spartans at home seems to be the weather, which caused the team to cancel or reschedule its home opener four times.

The women’s tennis team entered the ITA’s top 30 rankings for the first time in program history and the players currently stand at No. 22 as they head into the University Athletic Association Championship. The women are currently the fifth seed entering the tournament, and will look to improve on a seventh place finish in 2012. The women have jumped up the regional rankings to a program best No. 4 this season as well. The team is 11-7 overall and has played eight matches against ranked programs.

The team’s rise has been led by freshman Sara Zargham who has had an immediate impact in the top spot. Zargham is 15-8 in singles and is ranked third in the ITA Central Region. Also ranked is senior Erika Lim who is 16th in the region. Lim and freshman Surya Khadilkar are the team’s only ranked doubles team at No. 6 and are 7-1 so far this season.

The Spartan volleyball team capped off another successful season in one of the nation’s toughest conferences with a record four members named to the All-UAA team. Case finished 5-5 overall for a fourth place finish in the UAA, which boasts three top-15 teams ranked by the American Volleyball Coaches Association. The team finished 24-11, tied for the third most wins in program history. The four selections to the conference team were the most since 1999.

Leading the Spartans was senior libero Rachel Gulasey who earned second-team honors. Gulasey finished her career as the program’s all-time digs leader and is a three-time All-UAA honoree. Sophomore Natalie Southard built on last year’s UAA Rookie of the Year award with a second-team nod. Southard was second on the team and ninth in the UAA in kills. Senior right side hitter Hanna Collins ended her career on a roll earning her first ever All-UAA nod as an honorable mention. Rookie outside hitter Carolyn Bogart also earned honorable mention All-UAA accolades for her performance.

The University Athletic Association turned 25 years old this year, and with it came the announcement of the 25th anniversary teams by the conference office. The teams consist of UAA Most Valuable Players and student-athletes who accumulated five or more points with two points awarded for All-Association First Team recognition and one point for second-team accolades. In total, 65 Spartans were named to the 25th Anniversary Teams, including 27 MVPS. Eleven of the players honored are members of the Spartan Club Hall of Fame.

Junior Harry Weintraub broke a 25-year old school record in the hammer throw on his way to one of the finest seasons in Case track and field history. Weintraub had a toss of 188 feet, nine inches to beat Erwin Grabisna’s record of 185’3”, set in 1988. The throw earned him a third place finish at the All-Ohio Championship on April 13 and is the seventh best throw in Division III this year.

Also a winner of a conference title in the weight throw at this year’s UAA Indoor Track and Field Championship, Weintraub has been named UAA Athlete of the Week three times in his career and is currently on a two-week streak of receiving the honor.

All photos courtesy of observer archives