Track and Field shine at the SPIRE Invitational 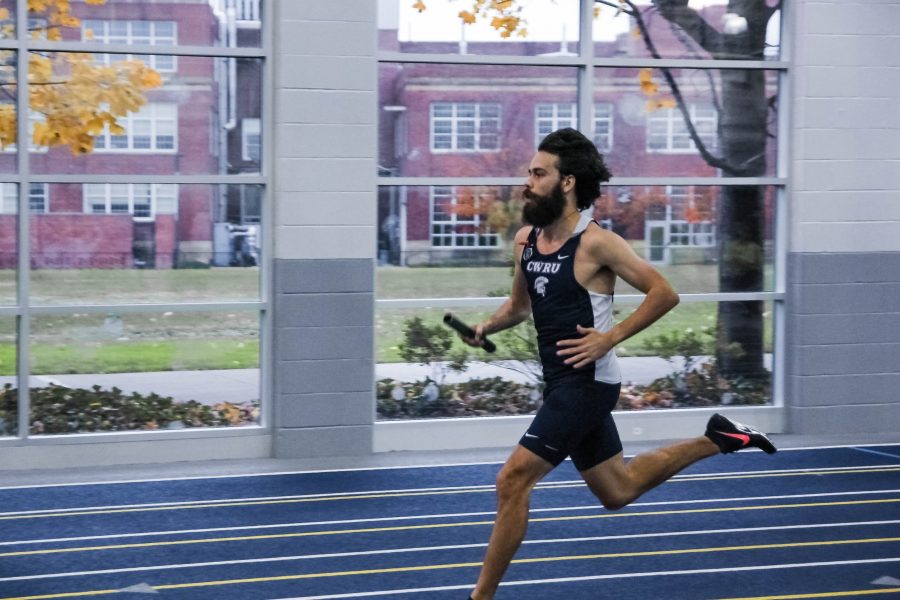 Nico Ericksen-Deriso sprints to connect with a teammate during a relay earlier in the season. The Spartans take on Carnegie Mellon University in the Ninth Annual Battle for the Obelisk.

Both the Spartan men and women performed well this past weekend at the SPIRE Invitational in Geneva, Ohio. A school record was broken, the Case Western Reserve University men took third place out of 12 teams and the women took seventh out of 13. The event, hosted by Carnegie Mellon University, was the first of the year to include team scoring, and CWRU was happy with the impressive results from its participants.

For the men, the standout performance of the day was the record-breaking 60-meter run by third-year student Ben Zelkin. The previous record, set by second-year student Rasheed Ajala last season, was 7.07 seconds and Zelkin broke that record with a time of 6.96 seconds. Despite the school record set during the prelims, Zelkin took only third in the event, but he did bring in 6 points for the team thanks to the performance. He performed in two other events, bringing in a total of 14 points for the Spartan men on that day.

Although no school records were broken by the women, they still came to play and performed well.

Fourth-year student Temi Omilabu took first place in the weight throw, giving her team 10 points. Also taking first was third-year student Cassandra Laios, who won the shot put contest and gave her team a total of 15 points for the day, 10 of which came from that one contest. First-year student Melissa Cuellar took third place in the shot put contest, earning six more points for the Spartans in the contest. The women scored a total of 44 points on the day, good for seventh place out of the thirteen women teams that competed.

The next competition is Saturday, Jan. 28 for the ninth Annual Battle for the Obelisk, an event hosted by the Spartans against archrival Carnegie Mellon University. The impressive results from the SPIRE Invitational should make this weekend’s events much more exciting to spectate as the team will be looking to improve upon its performance on the road, and perhaps even break some more records.