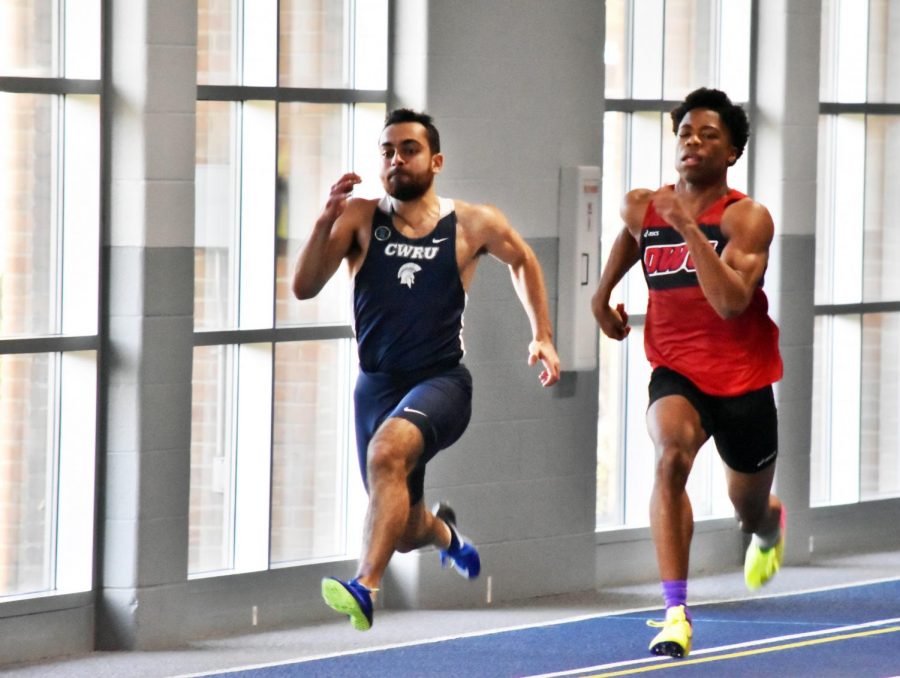 Fourth-year veteran sprinter Ben Zelkin runs past his opponent during the meet.

In their first indoor competition of the season, the Case Western Reserve University track and field teams turned in a solid performance at the Fifth Annual Spartan Holiday Classic on Dec. 2 at Horsburgh Gymnasium. The men’s team finished first out of six teams with 124 points, and the women’s team placed second with 115 points.

Fourth-year veteran thrower Cassandra Laios broke her own school record with a 13.65 meter throw in the shot put event. She finished in second place in the shot put and also added a third place finish in the weight throw event with a heave of 15.77 meters. Laios ranks first in the University Athletic Association (UAA) in both events.

In the long jump, second-year returning field athlete Dominic Oddo set a new school record with a 6.97 meter jump, though he still finished in second place in the event. Oddo added a third place finish in the high jump (1.82 meters) and a first place finish in the 60 meter hurdles (8.94 seconds). He currently ranks first in the UAA in the long jump and second in the high jump.

The Spartans earned five second place finishes at the meet, including four by individuals.

The Spartans return to action on Friday, Dec. 8 when the teams take part in the Kent State Golden Gala in Kent, Ohio. The next home event is the Battle for the Obelisk on Jan. 27, a dual meet against Carnegie Mellon University.