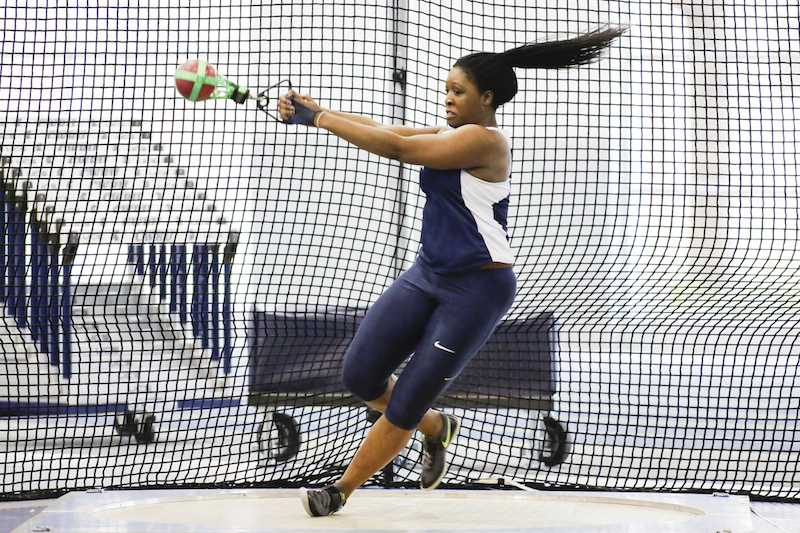 There were many firsts for the track and field team at the UAA Indoor Championship meet. Temi Omilabu, who took second in the weight throw, helped the Spartans sweep medal stand at the event.

The Spartans performed well in several events on the first day of competition. The women’s team occupied the whole medal stand after the weight throw, a complete team victory.

Third-year student Cassandra Laios took first place and the UAA Championship in the weight throw competition with a heave of 15.89 meters, the Spartans’ only first place finish for the day. Fourth-year student Temi Omilabu took second in the weight throw after recording a distance of 15.44 meters, and then third-year student Nimi Gupta took third place in the event with a distance of 14.57 meters. The trio dominated in the event, proving how ahead of the game the Spartans are when it comes to the event.

On day two, Laios again took first place, this time in the shot put competition, with a distance of 12.53 meters. With this performance, Laios became the first player in program history to win both the weight throw and shot put at the UAA Championships meet.

Another first for the program was the men’s 4×400 meter relay team, made up of second-year student Joseph Cabral, first-year student Jonathan Haling, third-year student Andrew Ibibo and fourth-year student Nathaniel Wahner, when they became the first team in program history to win the UAA title in that event. Wahner also won the 400-meter dash with a time of 48.89 seconds, setting a new school record in the process.

Several other Spartans turned in high-level performances on day two to help push their teams further up the rankings.

The indoor season does not end with the UAA Championships. The team is heading to Ada, Ohio, this coming weekend for the Ohio Northern University Polar Bear Last Chance Meet. The following weekend is the Division III Indoor Championship meet.