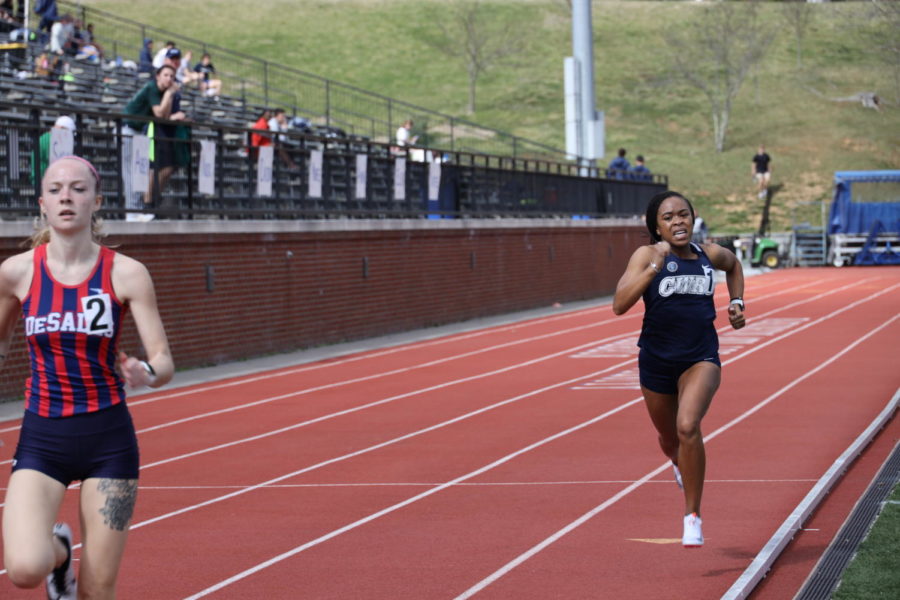 At the Washington and Lee Track and Field Carnival, second-year Elise Moore (pictured) takes home one of her two fourth-place finishes in the 400-meter dash

“Every one of them is a first timer and until you’ve been and get that first experience,” said Head Coach Eric Schmuhl in an interview with the CWRU Athletic Department, “there’s a lot of elements to it that are a little foreign, particularly the adrenaline of being on that stage.”

Singer opened the competition for the Spartans on the first day. He finished 17th out of 20 athletes in the preliminary one-mile run with a time of 4:14.20. Singer had set the school record for the event with a time of 4:11.59 earlier in the season. Aidan Ryan of Williams College took the championship with a time of 4:05.60.

Jaster finished off the events for CWRU on the second day. In the 3,000-meter run, Jaster finished 13th with a time of 8:27.79. He qualified for the meet with a program record run of 8:16.52. Phillip was crowned for his second victory with this event after completing the distance in 8:16.62.

“I couldn’t be prouder of everybody,” reflected Coach Schmuhl. “It’s not often that you get that big of a group to a national meet and so it was fun to get to know each other better… Given the things that we’ve had to go through, whether it be pandemic-related or team-related, it’s been a good indoor season.”

Coach Schmuhl also talked about the outdoor season, saying that “There’s a lot of growth that comes out of [the indoor season]. People start to recognize their potential and the team’s potential, so [with] moving it outdoors, I’ve got a lot of excitement to see where people take it from here.”

The Spartans kicked off their outdoor season last Saturday at the Washington and Lee Track & Field Carnival in Lexington, Virginia.

First-year Sarah Ozeki won the triple jump after putting in an 11.09-meter performance. Second-year Emily Hopkins came in fourth with a 10.88-meter showing. Both athletes also competed in the 100-meter hurdles, with Ozeki coming in sixth (15.85 seconds) and Hopkins finishing eighth (15.68 seconds).

Meanwhile, third-year Victoria Zhao tied for first in the pole vault at 3.07 meters. Two more athletes had top-four positions, with third-year Shelby Cooper coming in third with 2.92 meters and first-year Amelia DeiBiase came in fourth with the same mark.

This weekend, CWRU will travel to Pittsburgh to compete in the CMU Invitational.