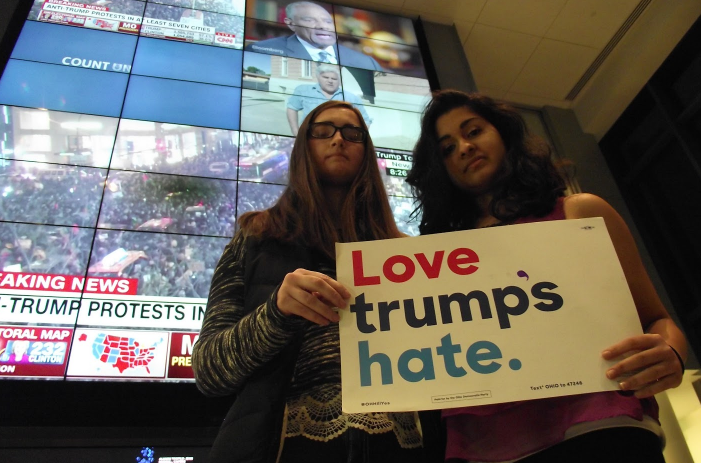 After the election result came out on Tuesday, Nov. 8, students shared mixed reactions about the impact a Trump presidency will have on their daily lives, and on the future of the country.

“None of us want to wake up Wednesday morning and wish we’d done more,” said Hillary Clinton during the final rally of her campaign, held at Independence Mall in Philadelphia on Monday evening.

But on early Wednesday, millions of her supporters were thinking just that as election results continued to trickle out into the early morning.

Leading up to Election Day, political commentators predicted 12 major swing states: Florida, Ohio, North Carolina, Iowa, Pennsylvania, New Hampshire, Arizona, Michigan, Wisconsin, Virginia, Colorado and Nevada. According to fivethirtyeight.com, Clinton was predicted to start off with 302 electoral votes in the states she was leading, while Trump was predicted to begin with 192. Polling data predicted that Clinton would have a leading edge in the Pennsylvania, Florida, Nevada and New Hampshire races. However, as election night progressed and votes were tallied, states continued to fall to Donald Trump, and the night ended with Nevada, Colorado, Virginia and New Hampshire standing as Clinton’s only swing state victories. In a surprising twist, Trump also won Wisconsin and Michigan, two states believed to be firmly Democratic territory by Election Day, and secured 306 electoral votes to win the election. Ohio went to Trump, continuing its tradition of being a reliable predictor of national election outcomes, with only seven of Ohio’s 88 counties going to Clinton, and Trump winning 52 percent of the popular vote. These seven counties included Cuyahoga County, Franklin County and Hamilton County, the homes of Cleveland, Columbus and Cincinnati respectively, the three largest cities in Ohio. Of the 28 presidential contests that have been held in the last 102 years, Ohio has gone to the winning candidate 26 times.

Demographically, voter turnout among white voters without a college degree surged while voting rates among minorities fell, and voters with an annual income below $30,000 voted for the Republican ticket in a significantly greater proportion than they did in 2012. Riding on high turnout for Trump, the Republican Party won a simple majority in the Senate and House of Representatives as well, giving the party firm control of two of the three branches of the federal government.

With the Republican party sweeping the election, Joseph White, Luxenberg Family Professor of Public Policy at CWRU’s Department of Political Science, outlined the direction that the next two years of lawmaking may take.

“Paul Ryan will probably get to enact his agenda of privatizing, cutting or eliminating key programs that make life more secure for many Americans, such as Social Security, Medicare and Medicaid.” said White. Trump actually defended the usefulness of these programs during his campaign, but “the vast majority of congressional Republicans want those cuts, and they’ll find ways to claim they are providing ‘opportunity’ or ‘freedom.’”

Republican or Democrat, many were surprised by the results of the election, especially given most polling data forecasted an 80 percent chance of a Clinton victory, strong early voter turnout for the Democratic Party and a clear acknowledgement from both sides that the Clinton campaign was running a much better ground game, with superior financial resources and better organization. Ed Rollins, the chair of Great America PAC, a Pro-Trump super PAC, even commented on Tuesday morning that Trump would need to pull a “miracle comeback” to win the presidency. In the final weeks of the election, Trump began emphasizing his belief that the election was rigged towards Clinton and repeatedly refused to concede if he lost the election.

“I really think people didn’t take Trump seriously enough,” said Ashley Watts, a first-year student. “A lot of people got complacent and decided that they didn’t need to get out and vote. Clinton underperformed [as a result]; she polled well and ended up losing states she was supposed to win.”

The race was razor thin in many states; Trump actually lost the popular vote by a mere 202,340 votes in an election with over 119 million votes cast. In New Hampshire, Clinton beat Donald Trump by only 1,437 out of more than 728,000 total votes. In several states that could have almost single handedly flipped the election outcome had they gone the other way, including Florida, Michigan, Pennsylvania and Wisconsin, Trump only won by a single percentage point of the state electorate.

The fact the Clinton won the popular vote, but still lost the election, was not lost on many. “Perhaps the most striking—and inspiring—outcome of this mismatch is that Hillary Clinton, the first woman to make a serious run for the presidency as a major party’s nominee, won 59,796,805 votes.” said Karen Beckwith, chair of the department of Political Science.

She continued that although few people have realized this, “Clinton won more votes of US citizens, nationwide, than Donald Trump, and more than any woman—or man—for the position of head of government in the history of the world. More voters were ‘with her,’ and that support is something that our nation can build on for the next woman with the courage, fortitude and brilliance to make a run for the White House.”

In his victory speech, Trump claimed that Clinton had called him to congratulate him on his victory. Clinton seemed to confirm this in her concession speech Wednesday morning. “I still believe in America, and I always will,” said Clinton. “And if you do, then we must accept this result and then look to the future.”

Although he is only now the President-elect of the United States, Trump has been a household name for decades, known by many for his reputation as a billionaire real estate and casino magnate, as well as a reality television personality. Trump ran for president with a message to “Make America Great Again” through policies including building a wall along the US-Mexican border and making Mexico pay for it, restricting immigration into the United States based on the ethnic and religious background of immigrants, throwing out the Trans-Pacific Partnership, lowering taxes and pursuing an isolationist foreign policy. His campaign strategy has been characterized by an off-the-cuff speaking style, the use of juvenile nicknames for his political opponents and a heavy use of the social media platform Twitter.

Trump is currently under public scrutiny for recently released tapes showing him talking with Billy Bush about kissing and groping women without their consent, and has faced at least 10 new accusations from women since then who claim that he has previously engaged in non-consensual sexual behavior towards them.

Wednesday morning, much of the campus community was still reeling in shock caused by the results of the election. Some classes dropped their planned schedules to have group discussions on the election and the implications of its outcome, and many student and University groups have offered opportunities for community dialogue, including the Greek Life Office (GLO), the LGBT Center, Office of Multicultural Affairs, Flora Stone Mather Center for Women, Interreligious Council and University Counseling Services. Pop-up dialogue, hosted by the GLO, met on Wednesday evening, offering students a safe place to share their feelings, thoughts and concerns following the election.

The Undergraduate Diversity Collaborative (UDC), a student umbrella organization that serves as an advocating body for diversity groups, demonstrated great concern over the election outcome.

“As an organization dedicated to the inclusion of all people, regardless of identity, we find the President-elect’s exclusionist-fueled rise disturbing,” said the executive board in a written statement. “Women, students with disabilities, Muslim students, Latinx students, Black students, Asian and Asian-American students, LGBTQ+ students, immigrant students: We stand with you.”

Monica Windholtz, president of Spartans for Hillary, saw the election outcome as a call to action for reform in our national electoral process. “As of 11:47 a.m. [Wednesday], according to Google’s election count, Secretary Clinton was leading in the popular vote by votes in the thousands.” said Windholtz. “Small difference though that may be … the arcaneness of the electoral college is highlighted yet again by this discrepancy, and I hope that it leads to calls for change in the way the United States carries out its elections.”

Sruthi Venkatachalam, a first-year student, was also surprised and concerned by the outcome. “I was expecting Hillary to win … but I think [the outcome] says a lot about the mentality and mindset of America,” said Venkatachalam. “The Indian and Muslim communities are a huge component of our country….I still find it hard to believe that something so dramatic as what he is claiming would happen immediately.”

Looking ahead, students have shown mixed reactions about the impact a Trump presidency will have on their daily lives and on the future of the country. “The president doesn’t have as much power as people think,” said Sam Llaneta. “But when it comes to screwing things up, there are a lot of ways they can make things go wrong”.

Another student who chose to remain unnamed agreed. “My brother won’t have health care without Obamacare, and he needs treatment to live. Trump is threatening to repeal Obamacare. So, this election isn’t just a choice for me. It’s a real life-or-death situation.”