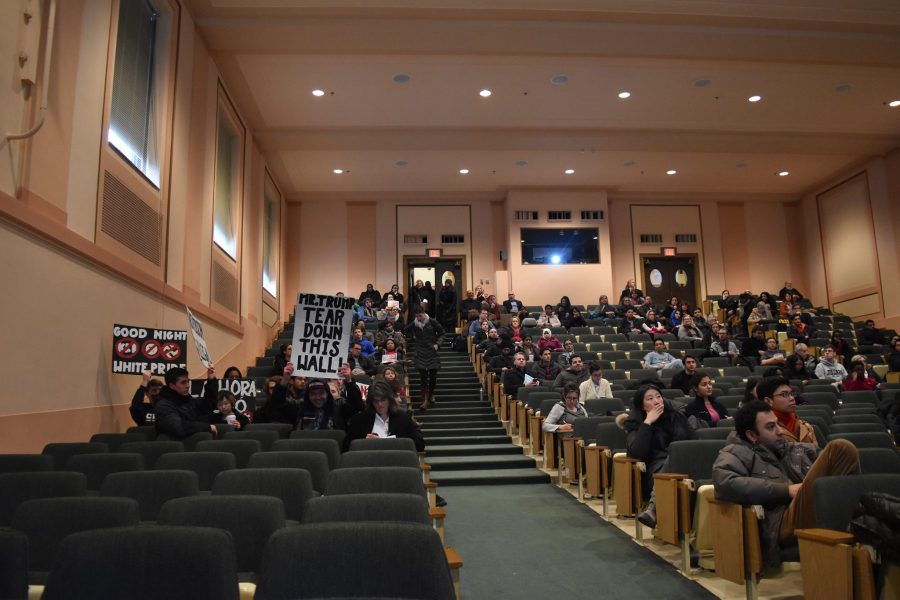 On Friday Jan. 27, President Donald Trump signed an executive order that imposed a series of limitations on entry into the United States, of which many applied to some students attending Case Western Reserve University.

A little over 24 hours after the order, CWRU students received an email by President Barbara Snyder and Provost and Executive Vice President, William A. Baeslack, recommending that students from seven countries from which entry was completely banned “refrain from international travel at this time.”

Students at CWRU from the seven banned countries, Iraq, Syria, Iran, Libya, Somalia, Sudan and Yemen may not be able to return if they left over the next 90 days. The order also indefinitely banned Syrian refugees from entering the United States and suspended all refugee admissions for 120 days.

Approximately 80 hours later, CWRU administration held an informational session on Monday, Jan. 30, where Provost William Baeslack, Vice Provost of International Affairs David Fleshler and a variety of university employees attempted to calm the fears of students affected by the travel ban or otherwise.

The presenters outlined a series of steps that international students affected by the ban should take to retain their legal status in the U.S.. They recommended that students with visas, green cards, I-20 forms and those applying for Optional Practical Training (OPT) for employment purposes should try and settle their paperwork as soon as possible and remain in the country for the next 120 days.

The presentation emphasized existing institutions set up to support and protect international students. Baeslack also assured that all those affected had been contacted by the university and committed to keeping their information secret barring any legal conflict.

It was unclear if students specifically from the list of seven countries could be provided affordable temporary housing once the semester ends.

During the information session, much of the open questioning portion was characterized by emotional pleas for assistance. Much of this sentiment seemed to be brought about after the Radical Student Union took the stage to encourage dissent and protest against the President of the United States.

A notable example came from a CWRU Ph.D. student, who described the commonality of confusion among foreign students as to their rights at the border. The student spoke of having their phone confiscated by customs agents and their passwords requested, compromising their privacy for access to the country.

A professor attending the information session agreed that this is a common problem for immigrants to the United States. They also acknowledged that independent research confirmed that under federal law, United States Customs and Border Patrol can in fact confiscate a phone and search it on very little grounds. Information gathered by these types of seizures is constrained by some US regulations for disclosure, however, much of this personal information may be relayed to other agencies.

The larger problem pointed out by both the student and the professor was the overall lack of knowledge by the immigrant community of their rights and privileges upon entering the country. The student described in particular friends and colleagues being taken advantage of by landlords, explaining that it was hard for people to come forward in those situations because of the fear associated with not knowing whether or not the landlords were in the wrong. The student requested administration to consider holding legal information sessions for international students.

Although no commitments were made by the university, Undergraduate Diversity Collaborative President Lilly Tesfai plans to work toward these goals. Tesfai said UDC is committed to planning events intended to inform CWRU students about the legal rights of foreign students.

There are currently systems in place to help students and staff apply for visas and otherwise enter the country legally. Adolfo Franco, an international student advisor in the Office of International Affairs, says his department works hard to make sure that everyone can get into the United States and that they know how to remain legal once here. He described existing programs, such as the International Student Success series, where students gather to discuss a variety of topics pertaining to how to succeed as an international student, from how to get a driver’s licence to how to travel domestically.

Franco also did his best to put a little bit of a positive spin on the day’s events, saying that “if there’s anything positive about this, it’s the fact that some comments have been made referring to some services that we can be more helpful with”.

He also said that he would take the meeting’s comments to his supervisors.

It is unclear if any CWRU students overseas who are unable to return to campus.