Turn off the lights: Spartans and Big Red tie 6-6 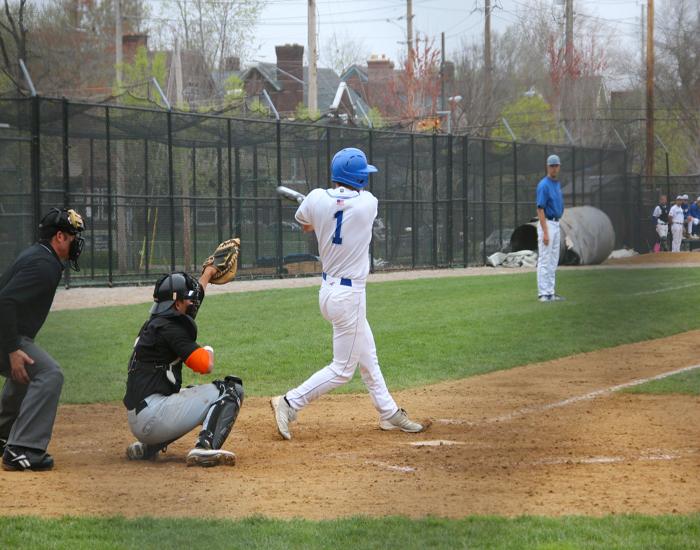 Game called due to darkness after 11 innings

Tuesday afternoon’s showdown between the Case Western Reserve University Spartans and the Denison University Big Red was so intense there was no winner. After three and a half hours of competition that stretched to 11 innings, the game was called a tie at 6-6 due to darkness. The tie moved the Spartans to 16-10-1 overall and Denison to 5-18-1. The tie was the first for the Spartans since April 3, 2008 at Baldwin-Wallace College. That matchup also ended 6-6 after 12 innings.

The 11-inning marathon included five lead changes and five scoring innings. The Spartans used 19 players while the Big Red used 13 of their own. This was the second meeting between the two teams. Last year, Case easily defeated the Big Red 19-2 behind the combined hot bats of outfielder Sam Alexander (two-for-five with three RBIs) and first baseman Brett Ossola (three-for-five with seven RBIs). This year, the matchup was closer than expected.

Denison got on the board first in the top of the second inning when Danny Kraus hit an RBI, ground out to second base, and helped plate Tim Duxbury. The Big Red’s one-run lead was short-lived; the Spartans immediately answered in the bottom of the second. After a single by senior left fielder Alexander and a walk by freshman right fielder Andrew Gronski, the Spartans plated their first two runs of the evening as sophomore third baseman Andrew Frey shot an RBI single up the middle.

In the top of the third, the Big Red regained their lead at 3-2 with a pair of runs on a two-out double from Justin Vaske. With senior leadoff hitter Bobby Marko at first thanks to a walk, the Spartans tied the game with an RBI triple to left centerfield by sophomore shortstop Matt Keen, who came around to score on a balk to push the Spartans’ lead to 4-3.

The Big Red knotted the game at 4-4 with an unearned run in the top half of the fifth due to an error by senior reliever A.J. Boshinski. The Spartans looked to regain the advantage in the sixth, but Denison shortstop Kyle Clemmenson climbed the ladder and robbed Keen of a potential extra-base hit with the bases loaded.

In the top of the eighth, Denison took the lead once again on a two-run double down the right field line off the bat of David Baskin. Not to surrender too easily, the Spartans recorded a run in the bottom of the eighth when freshman pinch hitter Kerrigan Cain singled through the right side of the plate to bring in sophomore pinch runner Jordan Dague. Another excellent defensive play up the middle by Denison’s middle infielders robbed Keen of an RBI once again.

After shutting down the Big Red in the top of the ninth, the Spartans tied the game thanks to an RBI single by Alexander that plated centerfielder Paul Pakan, who reached on base with a double to left field. Pakan hit a towering fly ball to left, just missing a homer, and ended up with a double. Then Pakan advanced to third on a wild pitch. The Big Red kept the game going when they threw out a potential game-winning run at home plate when Spartan senior outfielder attempted to tag up on a fly-out to left field.

In the 10th inning, Denison loaded the bases with only one out, but Spartan sophomore righty Josh Suvak buckled down and induced a fly-out and a groundout to end the inning. The game ended here, called due to darkness after the Spartans’ at-bats in the 11th.

On the offense, Alexander and Fey both went two-for-four on the night, each recording an RBI and a walk. Keen, who went one-for-five, also capped one RBI on the night. Pinch hitter Cain received an RBI on his lone at bat. For Denison, Clemmenson led the Big Red by going two-for-five with two runs scored, while Andrew Mahle was two-for-three with a double, two walks, and a run scored.

On the mound, senior righty Zach Fry got the start for the Spartans, allowing three runs on six hits with only two strikeouts and two walks in three innings of work. Senior lefty A.J. Boshinski went the next three frames allowing an unearned run on his two-hit, five strikeout performance. Freshman Robert Winemiller, Senior Bradley Potter, and sophomore Jose Vega came in for the remaining three innings of relief and tossed them without surrendering any runs.

The Spartans will visit Wabash tomorrow, April 7, at V.A. Memorial Field for a doubleheader. The first game is set at 10 a.m. On Tuesday, April 10, the Spartans will return home to face Wooster at 4 p.m.