The view from the green roof 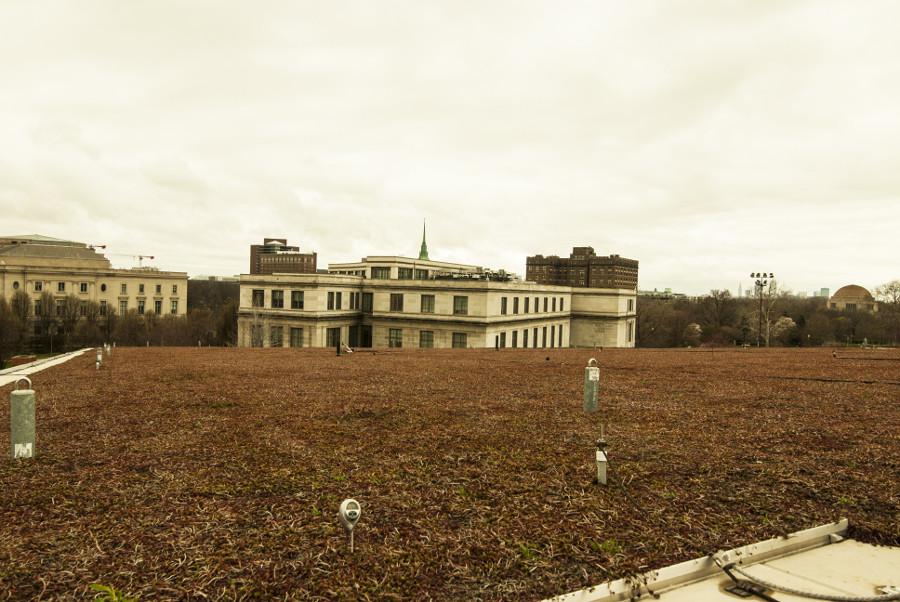 In addition to its green plant covering, there are also solar pabels adjacent to the TVUC roof which help supply the building with energy.

While the Tinkham Veale University Center’s (TVUC) green roof is often referred to as a “grass roof,” it is actually covered with plants from the cactus family, of the genus Sedum.

The plants serve to efficiently regulate the amount of sunlight that TVUC receives (adjusting for changes in season), thereby maintaining a comfortable internal temperature within the building. Adjacent to the actual roof there is also a series of solar panels.

“The primary purpose of the green roof is to keep the building cool in the summer and warm in the winter, as a sort of insulating effect,” said Randy Barnes, General Manager at the TVUC. “The [Sedum] plants retain a lot of water, which gives them much of their insulating value, [as do] the soil trays that they sit in.”

The plants work by “catching” and then releasing the heat that normally penetrates TVUC during the summer. In winters they do the opposite: keep the heat inside the building.

The roof also allows for the retention of water. “We run [the water collected by the plants] through a filter, from where it runs back into [TVUC’s] water system,” said Barnes.

Meanwhile, working in tandem with the plants, the solar panels next to the roof convert sunlight into electricity, most of which is used to power TVUC itself, while any excesses are released into the wider campus grid.

The green roof is thus an efficient structure, producing much of its own energy while at the same time both conserving water and regulating the internal temperature of the building to which it is attached.

The structure, known as a LiveRoof, was installed in 2014 by Corsos Perennials, a subsidiary of LiveRoof operating out of Sandusky, Ohio. The roof’s second anniversary on campus will be coming up this August. Because it is so recent, only a limited amount of data on precisely how much energy, electricity, etc. it can generate and conserve is currently available.

“We only started measuring [this] January how we’re performing against the previous year,” said Barnes. He was happy to report, however, that so far, “we do know that we’re doing much better now than we were when we first opened.”

“Certainly, [the roof] is an important part of the university’s commitment to being more ‘green,’ being more [environmentally] conscious,” he said. “From my perspective as the general manager of the building, I think it’s very efficient. It’s forward-thinking and responsible.”

Though it serves to make the TVUC more comfortable, students are not allowed to get comfortable on the green rooftop field; even the visitors who are allowed up on the roof keep to a non-plant-covered platform.

“We get asked a lot: ‘Can I go up on the roof? Can I walk on the roof?’” said Barnes. “But unfortunately, it’s not designed for that purpose. But it is pretty cool to look at, and if you look from the right angle, you can actually see the plants up there.”