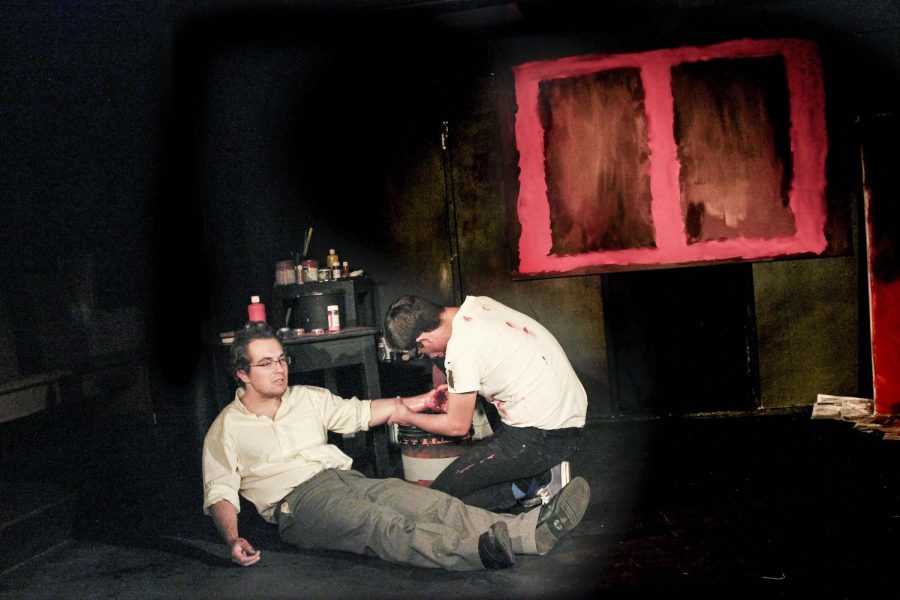 This past week, fourth-year student Brett DiCello and second-year student Tony Monczewski, both theater and biomedical engineering majors, brought two artists to life in the Eldred Black Box with Players’ Theater Group’s “Red.” DiCello portrayed Rothko, a older artist working on a commissioned set of paintings, while Monczewski played Rothko’s assistant, Ken, a novice who hopes to gain some wisdom from working with Rothko.

Although there were some moments of overacting, both DiCello and Monczewski portrayed their characters in a realistic and compelling manner that engaged the audience in the story and related the themes to their own lives.

DiCello played the controlling and demanding Rothko with a bit too much shouting, but was convincing overall. The constant shouting was especially jarring considering the small distance between the audience and the performers in the Black Box.

Monczewski also performed well. His Ken had beautiful moments of self-reflection but also included moments of conflict in which he voiced many of the audience’s concerns with Rothko’s character.

“Red” dealt with the meaning of art and the reasoning behind doing it. It asks the audience some important questions. “Why do you enjoy art?” “Why do humans make art?” “How and what does art communicate to the viewer?”

The design aspects of the production also expressed this idea well. Two lights coordinated by lighting designer Jonathan Sequeria periodically filled the stage with red light, a visual reminder of the color Rothko believes represents the aspects of life that make it valuable.

Paintings by first-year student Ashlen Trapalis remained on the walls of the Black Box for the entirety of the show, allowing audience members to feel fully immersed in Rothko’s artistic world.

The intimate setting of the Black Box was a perfect place to hold “Red” as the paintings, inspired by real paintings by the artist Rothko,  are meant to trap and force viewers to contemplate the meaning behind them. DiCello directed and acted in an overall well-done production of a well-written show.