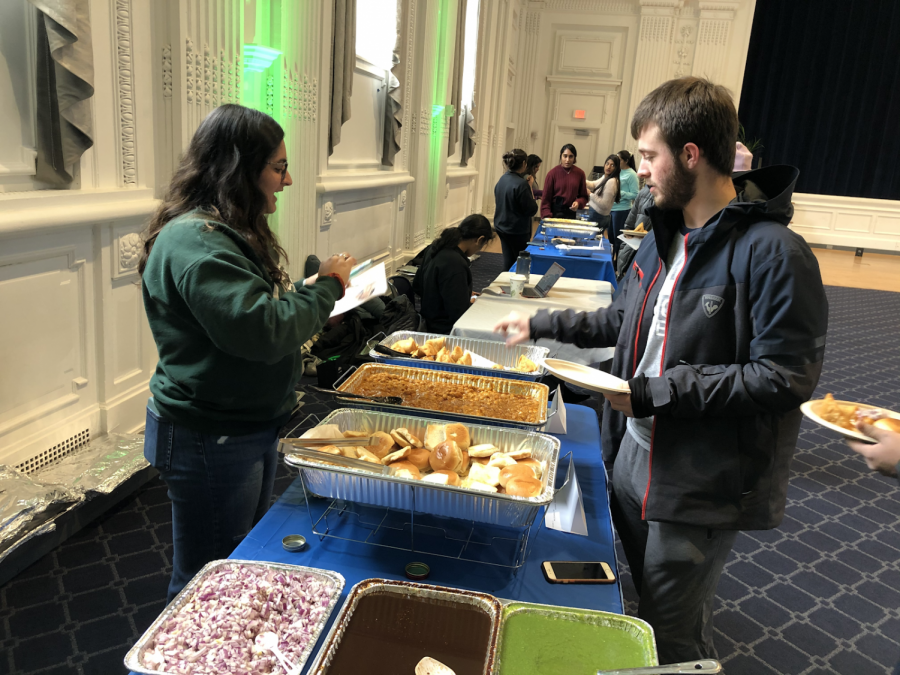 A selection of food on display at Taste of India.

The Undergraduate Indian Students Association (uISA), one of the largest clubs on campus, held Taste of India on Feb. 9 from 1 to 4 p.m. in the Thwing Center Ballroom. The event touted food, activities and games.

In the first of what uISA hopes to be an annual event, Taste of India featured nine tables with different aspects of Indian culture showcased at each. What made this event special, in uISA co-president and third-year student Shilpa Namala’s eyes, was the novelty of having such a diversity of food.

“We never have South Indian food at our events. We never have an event with all types of food like this,” Namala said. “We just wanted to try something new because we feel like we’ve had the same series of events for the past few years, so we thought we would give people a ‘taste of India,’ literally.”

With food catered from the Parma, OH based Indian restaurant 6 Flavors, the tables ranged from North Indian food, with staples like butter chicken and chana masala, to street food, with a rendition of the bread and vegetables dish pav bhaji, to South Indian food, with crepe-like dosas and idli rice cakes, to sweets like gulab jamun and mango lassi, to a table of just the spiced rice dish known as biryani.

Also included were various games and activities, ranging from a “Name that Bollywood Bop” challenge to a game of knockout with the Indian mango drink Frooti, to a spicy food challenge with the street food pani puri renamed to “pain puri” due to the spicy sauce added to the inside. A less suitable addition was that of a palm reading, done by a uISA member, that, while fun, seemingly had little connection to Indian culture.

Despite the culturally inauthentic fortune telling, the Bollywood music blaring helped set the mood. Attendees who visited all the activities had the chance to enter a raffle for a variety of Indian food and snacks.

“To make it more interactive, we wanted to include the game aspect,” Namala said. “The activities were honestly random games that we came up with together as a board, things that people were interested in running.”

Student feedback from previous uISA events played a role in shaping how this event was designed.

“When we asked people who have been to our events in the past what kind of things they want to see in the future, they said they wanted another mixer like we do in the beginning of the school year,” other uISA co-president and third-year student Girisha Kanuri elaborated. “That one is more aimed towards [first years] so I really like this event because it brought together people.”

And indeed it did bring together people, with over 100 tickets to the event sold. Although, while most seemed to be having a good time at the event, not all were pleased.

“The Indian philosophy is that if you’re gonna throw an event, you gotta make it big,” first-year student and frequent uISA event-goer Bishwadeep Bhattacharyya said. “This uISA event was the exact opposite. The food portions were too small and compared to events other cultural clubs are throwing, like Cafe KASA [from the Korean American Student Association] and Tet Celebration [from the Vietnamese Student Association, held the day before]. I’d rather have a bigger Holi or Diwali event than this. I think instead of having so many events, they should use more of their resources towards making their big events even more special.”

While it is undoubtedly true that uISA holds many events of mixed quality, uISA plans to use funds gained from this event for their more glitzy uISA Formal, which involves a dinner and dance, in late March. With that and Holi, Case Western Reserve University can be sure to have more uISA events to look forward to this semester.