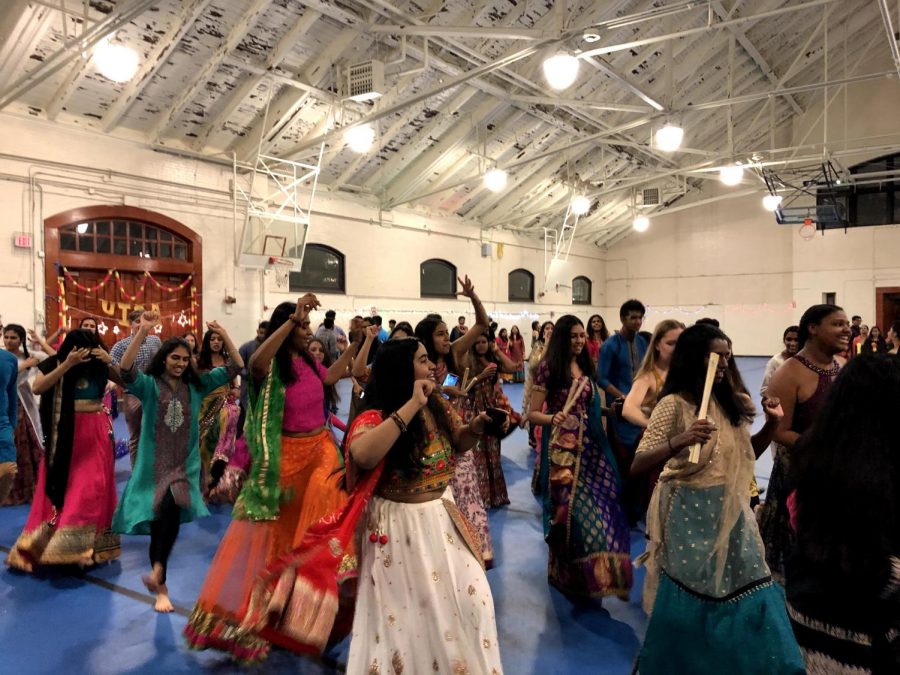 While most Americans will celebrate the holiday season later this winter, for Indians around the world, ‘tis the season. While most people are only familiar with Diwali—which is happening in the next few weeks, don’t worry—this whole month is jam packed with holidays and celebrations, with one of the most major being the Hindu festival of Navratri, a celebration lasting nine nights that leads up to the holiday of Dussehra.

In order to celebrate the season, the Undergraduate Indian Students Association (uISA) held a free “garba” for the entire campus to partake in on Saturday, Oct. 5 from 6:30 p.m. to 9:30 p.m. in Adelbert Gym.

The Navratri Garba was a fun dance party, filled with Indian dance styles to celebrate the coming of the season. This included garba, a regional dance from the Gujarat region of India often associated with the Navratri festivities, where dancers go in concentric circles around the center of the room.

Other dances included another traditional Gujarati form called Dandiya Raas, also used during Navratri, where dancers work in a line, pair up with a partner and hit dandiya sticks together before moving on to the next partner. At the end, there was even a not-so-traditional Bollywood dance segment.

“We’re definitely tailoring the moves to make it easy enough to learn while still keeping it traditional, in order to encourage involvement with people who don’t usually dance,” said Rohan Desai, a third-year and uISA treasurer, adding that “the choreography is simple enough that everyone can join in and feel like a group.”

Packed with colorful clothing, filled with blasting Indian music and adorned with hanging lights along the walls, Adelbert Gym had never looked so festive. Wearing sequined sari dresses and embroidered kurta shirts, many students of Indian origin took advantage of the uISA Garba to dress up in traditional Indian clothes and celebrate their culture, something they might not have been able to do without the platform of organization.

However, many students of different origins partook in the event, and learned a little about Indian culture in the process. After trying the food—which included chana masala, a dish made of chickpeas and aloo tikki, a potato snack—Harrison Rhodes, a first-year who had never had Indian food before said, “I learned a lot about Indian culture, and had a lot of fun with my friends. I hope they continue to do this event for years to come!”

As Navratri and Dussehra are religious holidays and not just dance parties, uISA co-president and third-year student Shilpa Namala was sure to share the significance of the event with everyone attending. Explaining to everyone over the loudspeaker, Namala explained that “the festival is in honor of the goddess Durga, who represents power and purity” before performing aarti, where you offer a flame during worship to the picture of Durga, sitting atop of a lion killing the demon Mahisasura with her ten arms.

“This is one of our only events that is open to everybody in the community,” Shilpa said when asked why the event was free of charge. “It’s a really great way for people to partake in the celebrations, whether they’re familiar with Indian culture or not.”

“We wanted to really educate people about our roots and step outside their comfort zone while still giving Indian students a place to celebrate that they might not otherwise have,” Girisha Kanuri, third-year student and the other co-president of uISA added.

uISA’s next event will be a paid dinner to celebrate Diwali on Nov. 9.