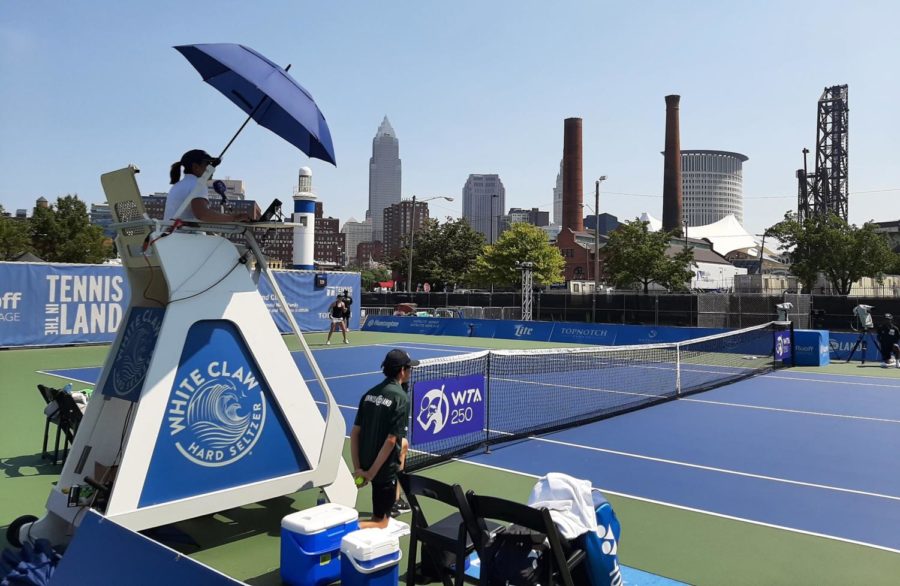 From Aug. 22-28, the inaugural 2021 Tennis in the Land event was held in Cleveland and broadcasted internationally.

Case Western Reserve University’s involvement began when Todd Wojtkowski, the head coach of CWRU’s men’s tennis team, was approached by Kyle Ross, the director of the event. Since this is the first time professional women’s tennis came to Cleveland, Ross requested custom umpire chairs to be constructed. Thomas Vinci, an industrial design student at the Cleveland Institute of Art, was chosen to lead the project, producing an umpire chair in CWRU’s very own Sears think[box].

Sears think[box] is a seven-story tinkerer’s playground. Each floor is home to a different aspect of the designing and manufacturing process of a product. It houses expensive, state-of-the-art equipment, such as waterjet cutters and soldering irons. Sears think[box] is open to everyone, even those unaffiliated with CWRU, at no cost.

Once Wojtkowski handed the project over to Vinci, Vinci had complete control over the designing and manufacturing process. Unlike the more conventional approach, which stresses functionality and cost-efficiency, Vinci took a user-friendly stance by interviewing umpires and asking them what they would like to see in an umpire chair.

“From the umpire I spoke to early on, it was [the] comfortability when you’re sitting up there and the ability to relax a little bit [that were most important],” said Vinci. As such, the features Vinci included were additional storage, easier steps to climb and a more comfortable seat.

“I think the major thing that [Vinci] did differently was to create a chair that could fit all different [body types],” said Wojtkowski. Most umpire chairs on tour are created to fit a specific model; it can be uncomfortable to sit in it for two to three hours in eighty-five-degree weather. “He designed it in a way so that no matter what size person was sitting in that chair, it [allowed] a perfectly comfortable [sitting] position,” said Wojtkowski.

After the core design ideas of the chair were refined, it was ready to be manufactured. ­­­­Vinci first created a 3D model of the chair and printed out miniature models of it. He then used a CNC router, which creates curved cuts, pockets and other 3D features in wood, for the framework of the chair. Assembling the chair came after, along with painting and waterproofing it.

However, his plans did not go as smoothly as he thought they would go. Vinci had to overcome two major hurdles, including a delayed response time from the officials about the logistics and adjustments, as well as the CNC router being down for a week and a half.

“Essentially, I just made up for the time by staying later at the think[box],” said Vinci. “One thing that was good is that, because I already worked there and because they kind of knew me, they felt comfortable giving me 24-hour access for me to work on this project.”

With only two and a half months given to finish the project, Vinci was under lots of time pressure. Nonetheless, Vinci was able to complete his project in the nick of time with the support of the staff at the think[box], his advisors and his team.

“It was an entire summer project he worked on every single day with the people in the think[box],” said Wojtkowski. “He finished it literally the day before the tournament started.”

On Aug. 21, the chair was shipped off to Jacobs Pavilion at Nautica in Flats West Bank where the tournament was held. After the tournament finished, the umpires approached Vinci, expressing their gratitude about how comfortable his chair was. Seeing how successful Vinci’s chair was, the umpires have since sent in more requests to the think[box] about reinventing other outdated designs.

“The reality is that the think[box] was the perfect place to do this,” said Vinci. “I have to give the think[box] credit for being the resource that it is … The fact that the think[box] exists for free is mind-boggling because I’m able to come here and use all this stuff for free. And on top of that, they’ll teach you for free … I can’t think of anything at the moment that could improve the think[box], other than that more people need to know more about it.”

Every student, regardless of major, can enter the think[box] and attempt to construct something meaningful. Whether it’s a gift for Christmas or a rocket designed to compete in the Spaceport America Cup, the think[box] is an invaluable resource for CWRU students.