Unfazed by the concrete jungle

In New York, there’s nothing CWRU can’t do 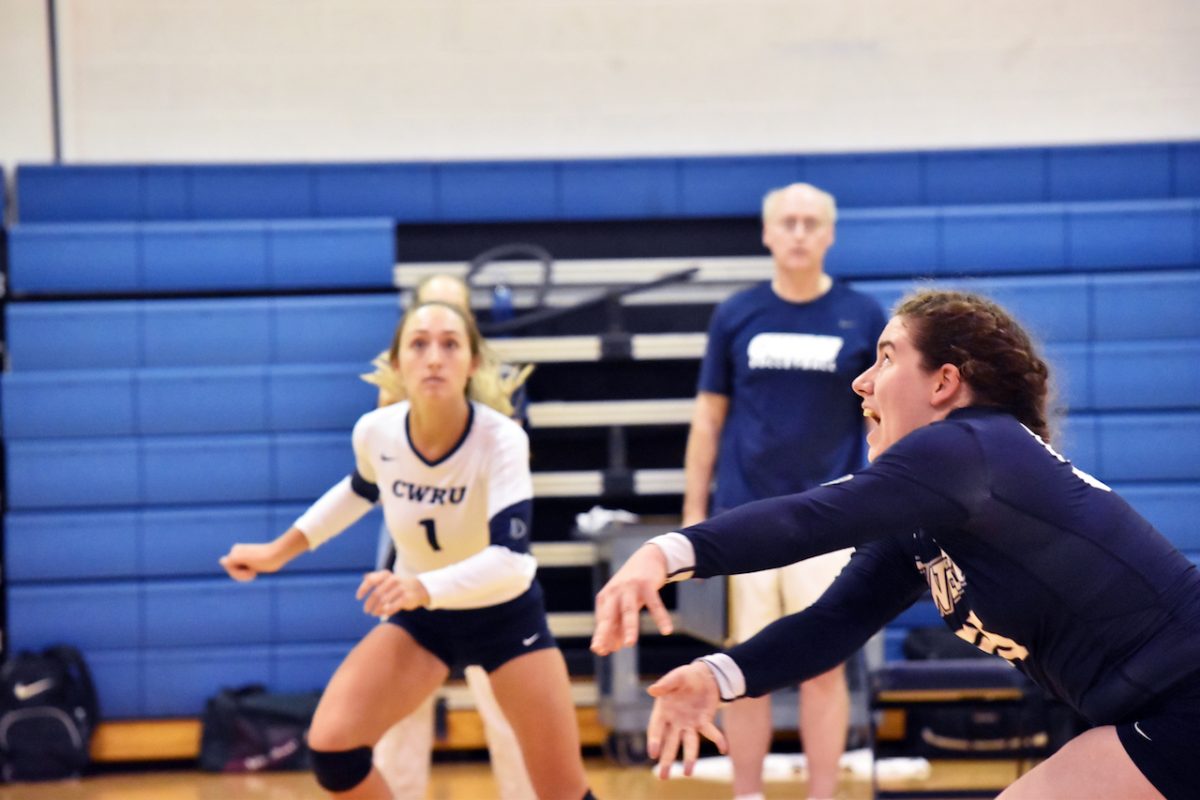 Noel Jeansonne frantically dives for the ball during the team's match against Baldwin Wallace; Haley Sims looks across the court after going up for a kill.

The big lights inspired the Case Western Reserve University volleyball team as they traveled to the Empire State and swept the Buffalo State Bengal Challenge, winning all three matches in dominating fashion.

However, all things weren’t as fantastic before the tournament. On Wednesday, Sept. 13 CWRU lost a tight match with the University of Mount Union. It lasted three sets, but Mount Union only won by a combined 11 points. The match was much closer than the final score indicated. Second-year hitter Brianna Lemon led the team offensively and defensively on the stat sheet with 9 kills and 10 digs, but everyone contributed in the effort.

“They played the best I’ve seen them play, they were really unstoppable,” admitted Head Coach Karen Farrell about Mount Union. Yet she was not at all disappointed with her own team’s play: “I actually thought we played very well, we just didn’t have enough points in us.”

Fourth-year captain Emma Briggs maintained that opinion, saying, “We played consistently well; that was one of the scrappiest games I’ve seen us play.”

Inside the gymnasium, it was obvious that the fans all knew this was a crucial game for both teams. Cheers and boos echoed during the entire game, especially from the Spartan student section which was made up of the men’s basketball team. They even “entertained” with, for lack of a better word, an “interesting” rendition of “Sweet Caroline.”

Farrell praised the presence of the student section, stating that their enthusiasm “so helps us.”

Briggs agreed, saying “it’s always great when they come. They bring a lot of energy.”

Moving on from the loss, the team wanted to rebound over the weekend. They did so by winning every match. The three killer second-year players up front (Lemon, Karley King, and Haley Sims) each recorded at least 10 kills while hitting above a .300 kill percentage in the first match against St. Lawrence. The second match against Fredonia featured a balanced attack and strong defense in a 3-0 win. The final match, like the first, went to four sets, but it was not as close.  Third-year defender Noel Jeansonne had a spectacular performance, racking up 16 digs to lead the Spartans.

“We controlled most of [the] matches, and we played very well,” said Farrell. “I’m very pleased with where we are at this point in the season. We’re still only three weeks into the season and some aspects of our game are stronger than they’ve ever been.”

On Sep. 20 CWRU faced local rival Baldwin Wallace University, losing in four sets,  and will follow that up with the Carnegie Mellon Tournament on Sept. 22 and 23.

If you haven’t yet, carve time out of your busy schedule to watch the volleyball team on their quest to 20 wins. And with the way they’ve been playing, it won’t be much of a time commitment since they’ll probably win in three sets.