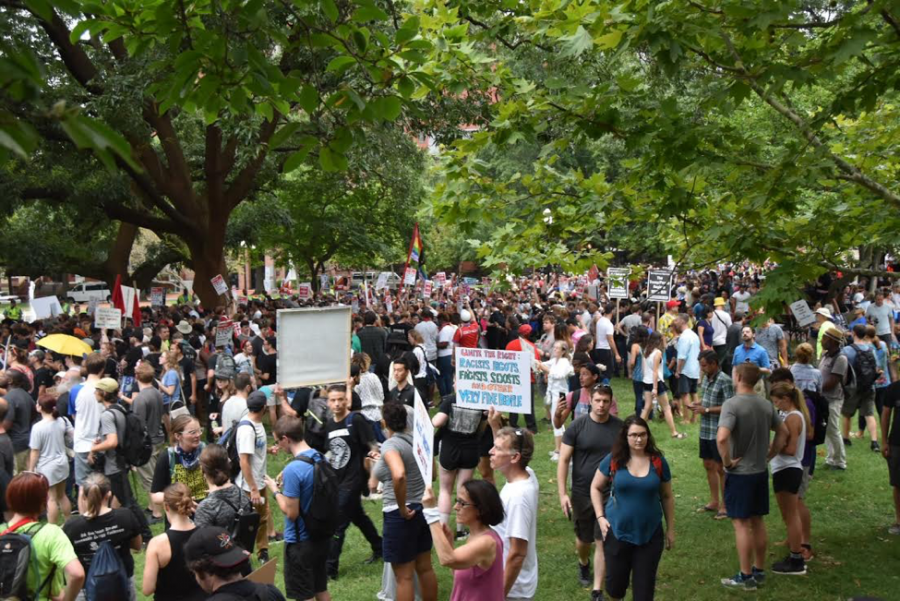 Alt-right protestors gathered in Washington, D.C. to mark the one-year anniversary of 2017’s Unite the Right rally in Charlottesville. While a large crowd was anticipated, the number of counter protestors far exceeded that of the Unite the Right movement.

Sunday, Aug. 12 marked the one-year anniversary of the alt-right “Unite the Right” protest in Charlottesville, VA, a rally which led to multiple injuries and the death of anti-nazi protester Heather Heyer. Although the movement was able to muscle its way out of the shadows and into the national spotlight, this year, it returned to those shadows.

After failing to receive a permit to march again in Charlottesville, Unite the Right leader Jason Kessler turned his attention to the nation’s capital, planning a march and rally in front of the White House for Sunday evening. The “Unite the Right 2” rally was suppose to include as many as 400 alt-righters walking the streets of D.C. and gathering on Pennsylvania Avenue.

Instead, the thousands of counter protesters and police officers in D.C. on Sunday were greeted by just several dozen protesters—who were so insulated by police during their walk from metro and so far from the counterprotest movement at the White House they barely appeared to be present at all.

Kessler told The New York Times that the alt-right numbers were held down by an “atmosphere of intimidation” and logistical issues, despite the police escort and closure of specific metro entrances to anyone outside their group.

On the other side of the fence, the Black Lives Matter movement joined forces to express their discontent for Unite the Right 2. Enough people filled the park that even reporters were climbing trees to understand the magnitude of the crowd and to try to catch a glimpse of the small group of alt-righters, which was obscured by both the distance and large number of people in the way.

Several alt-right supporters made their way to the non-cordoned off side of the protest. While many came simply to talk with their opposition or to reporters—often while being shouted down by crowds around them—some attempted to incite the crowd, though there were removed by a very active police force before physical violence, which occasionally threatened, could break out.

Eventually, the low number of Unite the Right supports, high turnout from counter protesters and the appearance of a thunderstorm forced the rally to retreat to Virginia well before the event was set to conclude. This result was well received by a large majority of the assembled counter protesters. The early departure, however, of the alt-right left some antifa groups in search of an enemy, which they found in the police.

Deprived of the ability to fight the alt-right, some groups clashed with police and reporters, launching fireworks, glitter bombs and water bottles at officers. Others grabbed phones and otherwise damaged the equipment of reporters.

With the alt-right small in number and hidden by distance and police, it was the black clad, mask or helmet wearing members of the antifa who inspired the most unease and caused the most damage.

The rest of the counter protest movement’s jubilant attitude against Unite the Right and the overwhelming police presence in the city prevented any damage from occurring, however. The day ended with no reported injuries and only two arrests.