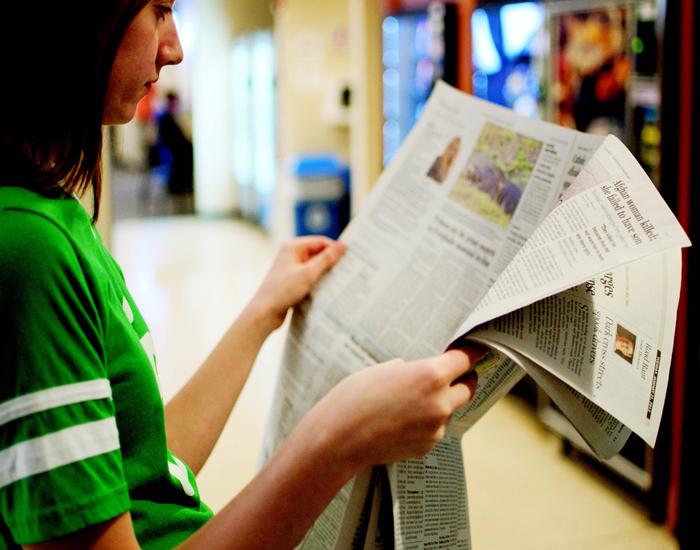 After a semester without the popular USA Today Collegiate Readership Program, Case Western Reserve University’s Office of Housing, Residence Life, and Greek Life has reinstated the program for the semester.

The program, which was canceled last fall, gives students free copies of The Plain Dealer, The New York Times, and USA Today in the major intersections of campus.

In previous semesters, the newspapers were available in all of the residence halls and other high-traffic areas, but the new version of the program has them in main campus hubs such as Leutner, Fribley, Wade, and The Village at 115.

Judging by the number of papers left on the racks, the program has been a hit with students, who have been leaving every rack empty by the end of the day. In particular, The New York Times and USA Today newspapers were gone in most locations by lunchtime many days last week.

The program was originally canceled by the Office of Housing, Residence Life, and Greek Life when the office faced major budget cuts and a loss in annual revenue. According to the office, many other internal expenses were cut, as well as phone service in student residence halls.

The phone service cut was well-received by students, as the service had gone unused for the most part, because students typically used cell phones rather than in-room landlines.

In an interview with The Observer last semester, Housing highlighted the other expense cuts necessary as a result of the budget constraints, including “full-time and graduate staff positions, in addition to reducing professional development dollars for [the] staff.”

Cuts were necessary across CWRU’s various departments last semester after a decline in total enrollment. In fact, the freshman class had about 200 fewer students than projected before the summer of 2011.

The decision to revive the program was based on the high volume of negative feedback received by Undergraduate Student Government’s (USG) feedback forum.

In addition, freshman USG representative Aditya Rengaswamy said in a statement to The Observer, “the vice president of student affairs, Glenn Nichols, came to USG general assembly to discuss various student life issues at [CWRU]… He mentioned that many students voiced wanting the paper program back, and he helped bring it back this semester.”

According to James Hale, the vice president of student life, USG pushed for a renewal of the program as soon as fiscally possible. He went on to say that the “USG Student Life Committee is still considering making a proposal asking for online subscriptions to popular news sources… We only slightly discussed it during our committee meeting.”

Hale went on to say, “[We have] put it on a back burner while we address concerns such as smoking and the availability of athletic facilities.” He clarified that the potential for an online program would be in addition to the current readership program and would likely not be funded by Housing like the readership program.

The potential online program is still in the early stages of development, and some USG sources have said that it is unlikely at the present time.

Despite USG’s involvement in bringing back the program, the USA Today Readership program is funded by the Office of Housing, Residence Life, and Greek Life, not USG.