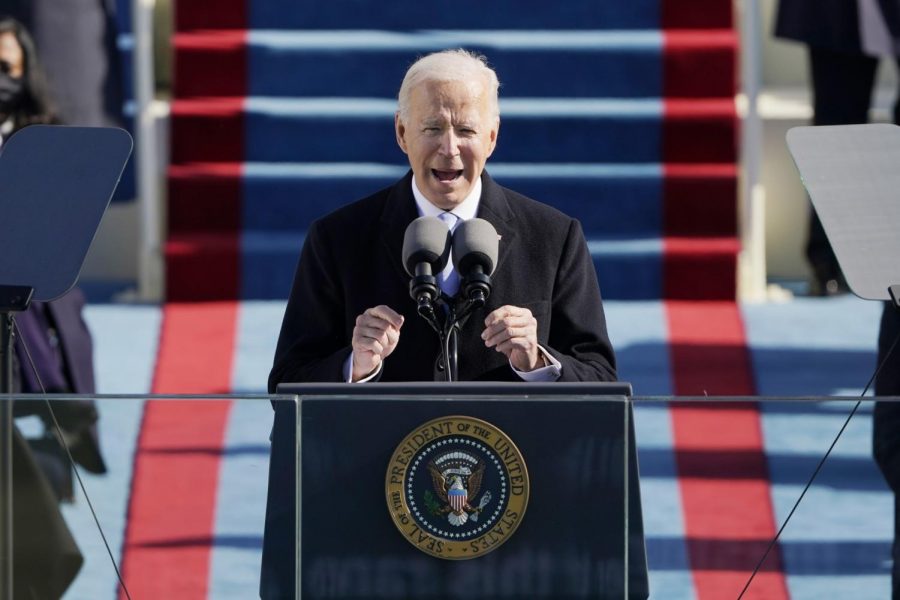 President Biden speaks at his inauguration last week after winning more than 81 million votes in the 2020 election.

For the longest time, the end of 2020 was all that everybody looked forward to. However, the early events of 2021, along with the continuation of COVID-19 contagiousness, prove that a rotation around the sun doesn’t erase Earth’s problems. Therefore, the responsibilities and expectations placed on our new president will be extremely high-stakes and be incredible weights on the well-being of America itself.

President Joe Biden has made numerous promises to American citizens for his upcoming presidency, with a $1.9 trillion plan coronavirus relief plan and many initiatives to enforce social distancing. These promised changes encourage people to look forward to a significant shift in our country’s leadership.

Nevertheless, the first step in Biden’s presidency—his inauguration—has already encountered unprecedented struggles. Two weeks prior to his inauguration, an event never seen before in American history happened: on Jan. 6, a violent insurrection resulted after right-wing rioters breached the U.S. Capitol, resulting in numerous casualties among both rioters and police officers. Following the insurrection, the potential for violence was heightened in states across the country.

Because of the security concern, Biden’s inauguration rehearsal was postponed, with his administration growing more cautious. The FBI also sent out a bulletin to lawmakers, police and other officials in all 50 states warning of the risk of domestic terrorism in the coming weeks.

The inauguration finally took place on Jan. 20, with a format that may have been too familiar with everyone during the COVID-19 pandemic: virtual. Legendary events such as the parade on Pennsylvania Avenue or “Field of Flags” had all gone virtual, requiring significant modifications to their presentation. Despite the many limitations this format posed for an event like the inauguration, there were still opportunities that wouldn’t have been available any other year.

For example, the most noticeable difference is that, thanks to the ability of streaming platforms such as YouTube and Twitch, the inauguration could not only be live-broadcast nationally, but internationally as well. Even the virtual parade itself inspired an amazing dance-off across the country—something that had never been done before in any past presidential inauguration.

On Case Western Reserve University’s campus, the Center for Civic and Experiential Learning, or CCEL, presented several events to engage students with the presidential inauguration, with a hope to enhance political awareness within the student body and empower them to fight for changes they want to see. Two events directly related to the inauguration were available: Presidential Inauguration Trivia Night (on Jan. 19) and Inauguration Info Table (on Jan. 20). Both events supported CCEL’s mission of providing opportunities to foster students’ civic awareness and understanding as active community members. With the inauguration as a central part of our democratic system, the events were aimed to highlight its importance.

The Trivia Night was presented as a preparation to go into the presidential inauguration without a “complete shock.” Elizabeth Banks—a staff member of CCEL office who worked on the initiatives of inauguration events—explained that the Trivia Night was an online trivia contest, with questions that “tested participants’ knowledge of the U.S. presidential inauguration and history of U.S. presidents and vice presidents.” They also supported the educational mission of the event: “after answers were revealed, fun facts were presented to provide additional context.”

The other featured event, “Inauguration Info Table,” was “a virtual space that made it easy for students to stop by and gather information about the inauguration: the schedule of events; where to watch; and historical fact.”

In both events, Banks reminded participants of the importance of registering to vote, that “even though the presidential election is over, CCEL emphasizes that it is still important to register to vote to make your voice heard in upcoming elections.” At the Info Table, the hosts provided numerous resources for getting registered to vote and how to access wellness support services, but CWRU students who missed the events and still wish to learn about registering to vote can visit CWRU’s TurboVote website for more information.

Banks’ final remarks tied together the Center’s mission and the events of the last two weeks: “the attention paid to a new president and Inauguration often motivates people to get involved in their political system—especially now, when there has been so much polarization in the U.S.” She firmly assured those in attendance that “at CCEL, students will be inspired to engage in their communities through activism, advocacy, political engagement and other forms of civic engagement; getting involved is an important way to make a difference in issues you care about—and is a vital component of democracy in action.”

Political engagement is one of the main goals of the CCEL office. The office therefore features “The Social Change Series,” which highlights a different form of civic engagement each month,  with February’s focus set as “Advocacy.”

The exact slate of events is being finalized, but students can definitely expect an “Advocacy 101” workshop and a panel featuring Cleveland change-makers who helped move the Cleveland City Council and County Council of Cuyahoga County to declare racism a public health crisis.These events provide tools and examples of ways that people have taken action to promote social change, and at CWRU, students have always fought for the changes they want to see.

The inauguration of a new president  opens up a number of possibilities for those seeking positive change in their communities. For CWRU students, these opportunities appear to be especially available with the resources made available to them.