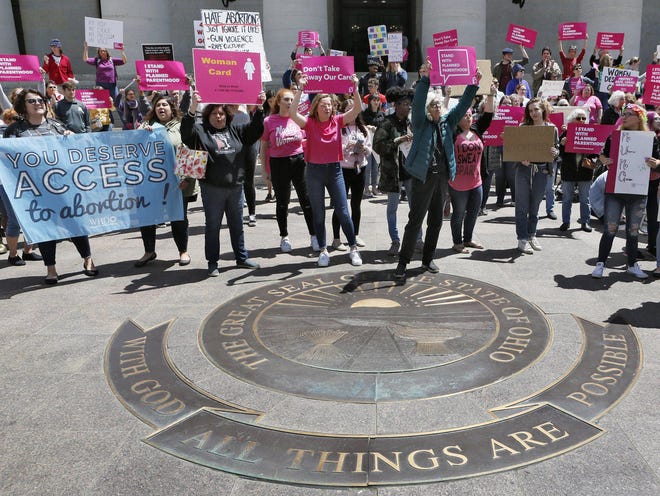 Courtesy of the Columbus Dispatch

The new and updated abortion laws in Ohio sanction only extremely specific cases for an abortion to occur.

Abortion regulations date back to the 1820s and 1830s when they were first enacted to target dangerous drugs used by women to induce abortions. By the 1880s, abortion was outlawed across most of the United States. During the women’s rights movement in the 1960s, court cases involving contraceptives laid the groundwork for Roe v. Wade, including one that struck down a law banning the distribution of birth control to married couples and later to unmarried adults.

On Jan. 22, 1973, the Supreme Court issued a landmark legal decision in Roe v. Wade when it struck down a Texas statute, effectively legalizing abortion across the country. The court held that a woman’s right to an abortion was implicitly protected in the right to privacy from the 14th amendment.

The court declared that the choice to end a pregnancy in the first trimester was solely up to the woman. In the second trimester, the government could regulate, but not ban, abortion to protect the mother’s health. In the third trimester, the government could prohibit abortion to protect a fetus that could survive on its own outside the womb, except in cases where the mother’s health was in danger. This based the right to abortion based on viability.

Since Roe v. Wade, many states have imposed restrictions that have weakened abortion rights. This year, SB 8 was signed on May 19 by Texas Gov. Greg Abbott and came into action on Sept. 1. This law, also referred to as the Texas Heartbeat Act, is expected to have a substantial impact on the number of facility-based abortions in Texas.

SB 8 contains two major provisions. The first bans abortion upon detection of fetal cardiac activity, which can be detected through ultrasound as early as five to six weeks gestation before the fetus’ heart has actually developed. This is earlier than Mississippi’s abortion law which bans most abortions at 15 weeks and even earlier than Roe v. Wade (roughly 24 weeks), making SB 8 the most restrictive state-level abortion law in effect in the U.S.

The second provision allows almost anyone to sue abortion providers and others who “aid and abet” a person obtaining abortion care after detection of fetal cardiac activity. This bars the state from enforcing the law and instead gives private parties the right to sue, regardless of whether they have any connection to the patient or even live in Texas, effectively making them bounty hunters. SB 8 also does not provide exceptions for instances of rape or incest.

“Aid and abet” is extremely broad language so even simply driving a patient to an abortion facility could give someone cause to sue. These individuals could face a civil suit for $10,000 for each abortion and be required to pay the plaintiff’s court costs. This law also subjects abortion providers to harassing lawsuits and prevent them from recovering attorney fees, even if they win in court.

The Texas law also requires women seeking abortion to have two appointments at least 24 hours apart, one for an ultrasound and another for an abortion. It further states that during the second appointment, providers must do another ultrasound to see whether fetal cardiac activity is detected. If it is, the women would be unable to get an abortion. This particularly affects Black or low-income patients or those who live far from an abortion-providing facility as they often experience difficulty in obtaining care due to financial or time constraints.

Another unusual part of the Texas law includes a retroactive measure with a statute of limitation that extends to four years, which enables private individuals to sue even if abortion was legal at the time. For example, if Roe is overturned, abortion providers could be sued for procedures they did up to four years prior.

There has been considerable backlash from abortion-rights advocates and abortion providers against SB 8. Despite a request for an emergency injunction, the Supreme Court ruled late at night on Sept. 1 against the request citing procedural grounds.

Many opponents of SB 8 disapproved of their response, arguing that the Supreme Court ignored the fact that the law is in clear violation of the Supreme Court’s long-standing precedents protecting abortion rights until much later into pregnancy. This ruling, however, does not overturn Roe v. Wade, but suggests the court is getting ready to take a definitive stance on abortion issues soon.

There are currently two major cases being heard by the Supreme Court due to the Texas law, Whole Woman’s Health v. Jackson, a case brought by Texas abortion providers and abortion advocates, and United States v. Texas, a case brought by the Department of Justice (DOJ).

On Nov. 1, the Supreme Court heard arguments for both cases. The DOJ has expressed concern that a range of constitutional rights could be threatened if the court accepts the Texas law’s enforcement mechanism. They argue that the Texas ban conflicts with the decision made in Roe v. Wade and Planned Parenthood v. Casey, and was designed to evade judicial scrutiny by delegating enforcement to private citizens.

Americans remain divided over supporting or opposing a woman’s right to choose to have an abortion, also known as “pro-choice” or “pro-life.” Healthcare practitioners have argued that at five to six weeks, which is when fetal cardiac activity tends to be detected, many women are not even aware of their pregnancy.

Providers previously said the law would bar at least 85% of the patients who previously could get a legal abortion and would leave women to travel hundreds of miles to out-of-state clinics. A new study from the University of Texas at Austin found that the number of abortions performed in Texas dropped by 50% in September 2021 from the same month in 2020.

Professor Jessie Hill, Associate Dean for Research and Faculty Development at the Case Western Reserve University School of Law and one of the country’s foremost experts on abortion rights, explains why this number is less than the 85% of patients who would not be eligible for an abortion under the new Texas law.

She speculates this is partly because people have been rushing to clinics to get an abortion during the legal period and providers have made adjustments including working overtime. However, the number of abortions performed is likely to decrease as this is an unsustainable method in the long term.

Many have wondered how the Texas Senate was able to pass SB 8, considering the ruling made in Roe v. Wade which states that abortion is legal until the third trimester, unless complications arise. In fact, there is nothing but the courts to stop lawmakers if they pass an unconstitutional law. Despite the unconstitutionality of these abortion laws, lawmakers could argue that Roe v. Wade needs to be overturned and the only way to do this is through passing more restrictive abortion laws that can be challenged in courts.

There are two possible routes to get the Texas law blocked. One way is to get a court to declare the law unconstitutional; however this is difficult because the Texas law leaves the enforcement to private individuals in private lawsuits. The other way is through a private lawsuit that would make its way up through the court, eventually landing at the Supreme Court which could declare the law unconstitutional, though this would be a very lengthy process.

Another lawsuit, this time based on Mississippi’s law which bans abortion after 15 weeks, is being heard on Dec. 1. This law was struck down by lower courts because it was not written like the Texas law. It is important to have this case in mind as it is the most likely case where the Supreme Court would overturn Roe v. Wade.

Whether other states follow Texas’ example depends on what happens with the two cases heard on Monday. The fact that the Court agreed to hear oral arguments on an expedited basis—10 days rather than the typical six to eight months—suggests that the Court will decide on those two cases rather quickly. If the Court decides that the two lawsuits can go forward and that they disapprove of SB 8, it is unlikely other states would try the same thing.

On Nov. 2, a day after the Supreme Court heard oral arguments for the two cases related to the Texas law, the Ohio legislature introduced HB 480, a bill that mimics the Texas bill but goes even farther to ban abortion in all cases except to save the mother’s life.

Like the Texas bill, it leaves enforcement up to private citizens who may bring a civil action against any person performs or induces an abortion after fetal cardiac activity is detected, engages in conduct that aids or abets the performance or inducement of an abortion or has demonstrated that they intend to engage in these above actions.

It specifically bars civil action from being brought by officers or employees of a state or local government entity in Ohio, the person who impregnated the female patient receiving an abortion through rape, sexual battery or gross sexual imposition.

This is even stricter than the Texas abortion law and foreshadows the likelihood that other states will attempt to pass similarly restrictive abortion laws. All eyes will be on the Court’s decision in the following weeks in both Texas and Mississippi’s court cases in less than a month as it holds great significance for Ohio’s own extremely restrictive abortion bill, women’s reproductive rights and the legacy of Roe v. Wade.