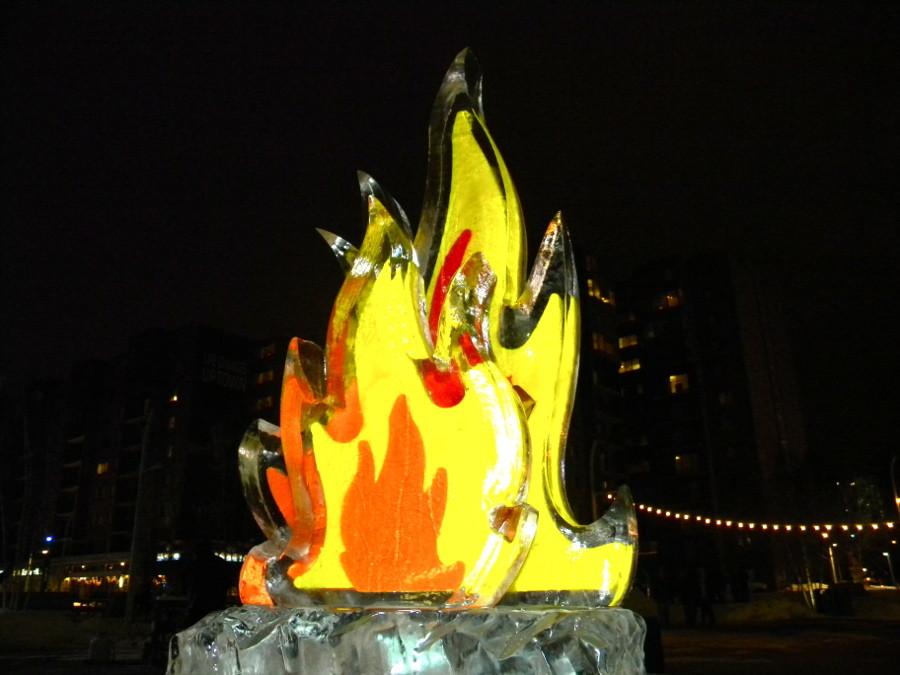 Fire and Ice, Uptown Cleveland's latest event, had many different events to keep Clevelanders outside even in the snow.

Clevelanders gathered together to celebrate the winter season at the Fire & Ice event last Thursday, Jan. 22. This winter festival, presented by Toby’s Plaza, is a continuation of summer’s activities series that incorporates local businesses and attracts more people to the Uptown area.

While everyone had their own niche, The Corner Alley hosted creative hands-on games and activities such as light-up igloo building and ice bowling.

Among the fun games and activities, several people grabbed hot cups of apple cider, courtesy Constantino’s Market, and crowded around the fire pit to keep warm while they listened to the upbeat music.

Case Western Reserve University students and University Circle locals stopped and stared as Jeff Meyers, an ice sculptor from Elegant Ice Creations, created incredible structures, including a snowman, snowflake and fire flames. Meyers took a ceramics class as a senior in high school and soon after he graduated got hired as a carver. He learned the majority of his carving skills from his boss, Aaron Costic, who started as part of a culinary program where chefs sculpted edible fruits, sugars and ice.

“I’ve been ice sculpting for over 13 years now, and I travel quite a bit. I’ve traveled to Alaska and Canada, but I’m primarily around the Northeast Ohio area working for a company called Elegant Ice Creations,” said Meyers. “It’s an interesting job, because I get to ice sculpt year-round for weddings, birthdays, corporate parties and winter festivals like this one.”

The cold temperatures didn’t stop anyone from having a good time at this event. Playing ice bowling, warming up near a fire pit and watching a block of ice get turned into a snowman spiced up an otherwise bleak Thursday night. Though it faced Cleveland’s brutal temperatures, Fire & Ice was a good start to potential Uptown Cleveland winter events.