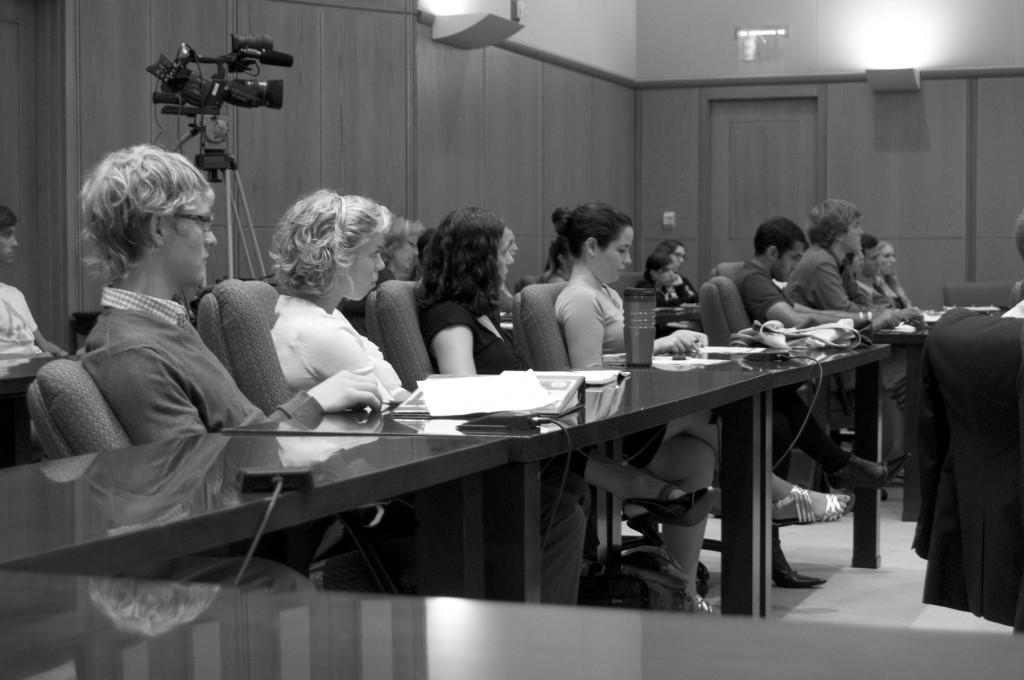 Tuesday marked the first Undergraduate Student Government General Assembly meeting for the 2010-2011 year. The meeting opened with introductions of all the representatives and executive members of the General Assembly. President Minh-Tri Nguyen welcomed everyone back and illustrated all the hard work that had been done.

Many executive members had been on campus over the summer. “We just dug into the work,” said Nguyen. USG was also a very active part of the Welcome Days activities. Several representatives helped to make the Activities Fair and Welcome Back Dance possible, as well as a new USG SatCo that occurred this past Saturday. Other initiatives that were highlighted in the welcome address were the new Tinkham Veale University Center, the new Performing Arts Center, and the university’s Climate Action Plan.

Vice president of student life Divya Aggarwal presented her committee report. As well as restating all of the new projects that have been happening since the last semester, Aggarawl informed the G.A that the student life committee would be equally busy this semester. Aggarwal helped to get the student resource guide together that was given out by USG at the Activities Fair. There is also a new safety presentation in development for the freshmen.

“We were approached by Dr. Kenny and Officer Mark about presenting a program that really highlights how community and community officers really work as part of campus safety,” said Aggarawl. In addition, this year’s Safety Fair will be held on the Quad this year instead of inside Thwing Center.

Kelly Maloney, the vice president of information technologies had some very crucial announcements to make as part of her committee report. IT services is going to be removing the filer system that many organizations on campus use to manage their websites. This means that these organizations will have to transfer their sites to other services, but this will not be happening immediately.

ITS is also looking into making the network for the residence halls separate for the network that services the rest of the campus. This could potentially increase the amount of bandwidth that each person has to work with. Changes are also coming to the campus CollegiateLink system. After gathering feedback for organizations at hundreds of universities over two years, CollegiateLink will be unveiling an almost completely redone system sometime in the near future.

A topic that many members of the community have been discussing since spring semester was reintroduced in Tuesday’s meeting. The SEC referendum to cut funding to Greek Life has caused tempers to flare on both sides of the issue.

“The Greek community approached us before the end of classes last semester with a petition to revote on the referendum. They had the necessary number of signatures, but since it was so close to the end of classes, we were unable to act upon it until this time,” Nguyen stated. The referendum will be reviewed by USG and sent to the community for a new vote sometime this semester.

Another topic of interest to the community-at-large is the election of representatives from the College of Arts and Sciences, School of Engineering, Frances Payne Bolton School of Nursing, and Weatherhead School of Management. Letters of intent must be submitted before elections begin. Some have already been sent in, and the meeting of the G.A brought forth many nominations for the few open positions. The elections are open to the community and interested parties are encouraged to submit their letters of intent. Elections will be held during the USG meeting on Sept. 7. Freshman representatives are encouraged to run.