Students have opportunity to vote on issue in upcoming election 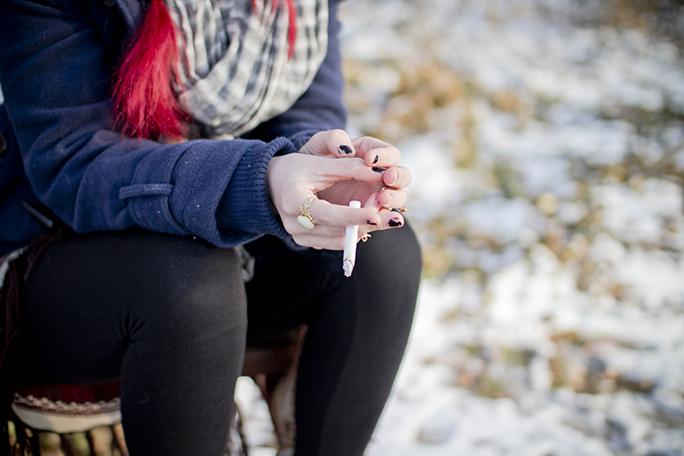 It’s a fairly familiar sight: groups of students gathered together, shivering in the Cleveland cold, smoking cigarettes across the street from The Village Starbucks or outside of the Veale parking garage. Since 2005, these student, faculty and staff tobacco users have been asked to restrict their use to the 15 designated smoking areas on campus, a policy that, without much real enforcement power, has only been mildly successful.

Even with this policy in place, the argument over tobacco usage continues both behind the administration’s doors and between students on the street, with the debate now coming to the forefront with the university’s proposal to go entirely tobacco free.

The proposal, presented by Dr. Elizabeth Click, medical director and assistant professor at the Frances Payne Bolton School of Nursing, to the members of the Undergraduate Student Government at their Oct. 8, 2013 meeting, looks to ban all tobacco products, including cigarettes, chewing tobacco and e-cigarettes, from campus completely, eliminating the designated smoking areas.

“It is well known that tobacco use is unhealthy,” said Click. “The university is continuing to look at the policy to encourage better health among faculty, students and staff.”

Although some details regarding execution and enforcement still need to be hashed out, the gist of the proposal is clear: CWRU is a research university that prides itself on being ahead of the curve in health and technology, and it should not be allowing a practice that is widely acknowledged as being extremely unhealthy to continue on our campus.

To the members of USG, though, the issue isn’t as clear-cut. Many factors must be considered before putting such a policy in place: enforcement, safety, student rights. What does going tobacco free really mean for our campus, and should CWRU do it?

The idea of going tobacco free has been a possibility to university administration since the fall of 2012, but it has picked up steam recently, especially as other schools in Ohio (including nearby Cleveland State University) and around the country make the commitment to go tobacco free. There are currently over 800 tobacco-free campuses in the United States, a number that has been growing quickly in recent years.

The new policy, if approved, would go into effect as early as fall of 2014. Its ban on tobacco usage within the university would extend across campus, and would also include the grounds of University Hospitals.

The university approached USG with the hopes that they would be able to provide student input into possible enforcement and implementation of the new changes. However, many representatives struggled with the idea of supporting the policy outright without first asking their constituents if they were even interested in going tobacco free or not.

“With tobacco, there are two extremes: either go completely smoke free, or allow unrestricted tobacco usage,” said Aditya Rengaswamy, a representative for the Weatherhead School of Management. “If we go to the extreme on either side, then someone is going to get trampled.”

“I don’t smoke cigarettes,” he continued. “But I have friends who do. I have constituents who do. I’m not about to tell them, ‘hey, you need to stop right now.’”

Others took the opposite view, citing health concerns about the problems with secondhand smoke. Secondhand smoke is widely acknowledged as being a serious issue, with 34 reports released by the U.S. Surgeon General detailing its harmful effects since 1964.

“Secondhand smoke is harmful,” said Sarah Cate Pfister, an engineering representative who also serves on the public relations and student life committees. “I’m not denying the right of smokers to smoke. If they want to make that choice, that’s their right. But we shouldn’t all have to breathe it in.”

Walter Huang, a member of the information technology committee, agrees with Pfister’s sentiment.

“We have smoking areas, but they can’t perfectly protect students from secondhand smoke,” said Huang. “I can’t guarantee that with this policy smoking would disappear on campus, but it would at least be better than what we have now.”

Secondhand smoke isn’t the only safety issue to be considered, though. Rengaswamy and other students were quick to bring up the problems that the new policy could raise for smokers at CWRU.

“If people who like to smoke aren’t allowed to do it on campus, then they may be forced to go to dangerous parts of the city to smoke,” said Rengaswamy. “The only way I would be in support of a tobacco free policy is if they could work out the logistics to make it perfect, which I just don’t see happening.”

Critics also focused on student rights, which may be violated by such a restrictive policy.

“Even though smoking is an unhealthy activity, I believe the students should have the right to decide if they’re going to smoke or not on their own,” said Connor Toomey, USG treasurer. “I think that a better alternative to going tobacco free is simply better enforcement of the current policy, making sure that people are using the designated smoking areas as they exist now.”

There has been a lot of debate on the issue within USG and, with the upcoming election, they’d like to open that debate up to the public. When voting for USG officers and representatives for the upcoming semester, students can also answer a poll saying whether or not they would be interested in a tobacco free campus.

“The representatives are uncomfortable voting on behalf of their constituents without getting a better idea of their opinions on the issue,” noted Taylor Gladys, vice president of student life, who is running unopposed for USG president.

“We want to draw attention to the fact that the university going completely tobacco free is a possibility, and see where students fall on this issue,” she added.

The poll will only help with USG’s understanding of student opinion, and will have no direct policy implications.

USG voting is available online at usg.case.edu/vote from 8 a.m. on Thursday, March 27 until midnight on March 28.