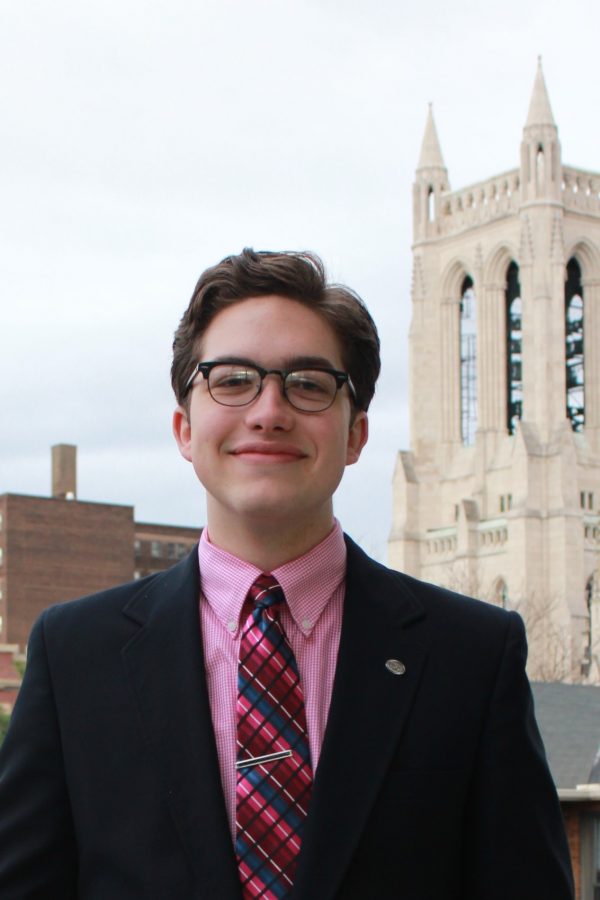 What are your plans for this position?

This year has been an incredible one for collecting student feedback. The Public Relations Committee has pioneered brand new tools for collecting concerns from around campus. Now, it’s time to actually get to work to solve those problems. In my two very active years in Undergraduate Student Government (USG), I’ve come to understand what it takes to be successful. Next year, I want to use my experience to help my fellow representatives be as successful as possible. I will do this by working extremely closely, 1 on 1, with committee members to develop a list of concrete steps to complete their initiatives and a timetable that can be used to make sure they are making constant progress. Given that I’ve worked on bug initiatives that involve multiple facets of the organization and I’ve served on three committees this past year, I’ve also come to understand the power of collaboration. I would bolster collaboration in USG by encouraging representatives to work on initiatives that span across the organization. I would also, with the consent of the other VPs, sit in all of the other committees so that I can keep my representatives updated on the important work happening across the organization. Finally, I hope to address retention problems in USG by making the organization a fun and comfortable place to be. I would do this by ensuring that representatives in committee have the opportunity to know each other and become good friends.

What is one initiative that you want to complete in your first semester?

I want to ensure safe and easy shuttle access to the Kelvin Smith Library (KSL) Oval. I have four specific plans to do so. First, the Standard Parking spotter near Thwing should be inside the KSL vestibule to let students know when the shuttle is arriving and then walk the students over to the stop on Euclid. Second, a new stop should be developed at the Linsalata entrance to Tinkham Veale University Center, allowing students to walk through a secure, heated area between KSL and a shuttle stop. Third, a real turnaround should be constructed near Thwing as soon as possible. Fourth, an LED NextBus sign should be placed at the entrance to KSL.

How will you work with the President of USG to move forward with making CWRU a sanctuary campus?

I feel especially strongly about this topic, given that I am the representative who wrote the sanctuary campus resolution. In every meeting, it is vital that relevant administrators feel polite yet unwavering pressure from USG to meet our demands, such as providing housing for students affected by travel bans. Beyond this, though, I will seek to not just ensure that demands are met, but also that programs developed by the administration do more than the bare minimum to meet our requests. Finally, it is critical that the president and I stay constantly informed of the volatile political climate and in constant contact with immigrant students, making sure that their evolving concerns are being heard by administrators and met in a robust manner.
One of the most vital steps that has to be taken is ensuring that administrators are properly trained on immigrants’ rights and that regular sessions are held to inform immigrant students of their rights. Beyond this, the administration must also agree to secure legal representation for immigrant students, and this representation must be competent and sufficient.

How safe do you think the CWRU campus is and what areas of improvement do you see?

CWRU is not a safe campus right now. Every year, without fail, as the temperature increases, so too does the number of security alerts. Obviously, the loss of student property and the potential for personal injury is a serious concern of mine. Almost more concerning, though, is the level of fear and anxiety this promotes across campus, making students unable to truly enjoy their university experience. I have a number of plans to make CWRU safer.
First, having adequate lighting and alert systems (Blue lights) is critical. This year, I had the opportunity to participate in a lighting tour, where I went around with the Student Life committee and representatives from the Office of Public Safety and indicated anywhere that there were lights that weren’t working. This is important, but it’s ultimately not sustainable to have USG members in charge of what had ought to be a normal maintenance practice. I would push for regular lighting tours to be conducted by university staff. I would also like to see stickers at the base of lights with identifying numbers, so that students could take pictures of stickers on lights that aren’t working and send them in to maintenance staff via the CWRU Shield App.
Next, the University needs more descriptive safety alerts. Knowing promptly when crime occurs on campus is useful, but our current system for doing so includes very little information. At other universities, security alerts are more detailed, in some cases including film of the crime, so that students can identify what to look out for. Additionally, a heat map of crime needs to be developed.
Finally, it’s critical that as a greater emphasis is placed on security, innocent students are not targeted. I spoke to students of color on campus last year, and one common concern is that security alerts that include only race are not helpful for identifying suspects and only stigmatizes innocent students of color on campus. This concern has been addressed by the Office of Public Safety by striving to develop more detailed suspect descriptions, but as security alerts pick back up going into the Fall semester, this is a concern I will continue to keep in the forefront of discussions with administrators.

How can campus transportation be improved?

Campus transportation at CWRU faces a number of issues. As described above, one of the most acute problems that is most commonly referenced by students is the lack of safe and easy shuttle access to KSL; I have already addressed my concrete plans to solve this concern.
Shuttles in general are difficult to use and unreliable. I am already working on specific solutions with Vice President of Campus Services Richard Jamieson. First, on reliability: The main problem facing the NextBus prediction system is that drivers take unannounced stops. The prediction system has no way of accounting for this, and so it throws the system off severely. I have already proposed a solution for this issue that has been accepted by Standard Parking and will be implemented soon. On the GreenLink, there will be two stops whose arrival times will be pre-timed. This will increase accountability and reduce unannounced breaks by reminding drivers that there is an expectation that routes be completed in a timely fashion. Further, Campus Services is potentially pursuing alternatives to NextBus, and I would be involved in ensuring that any new system can address student concerns. Additionally, to increase the usability of the system, I am working with Vice President Richard Jamieson to develop large posters with information about only the most commonly used routes to be placed at prominent stops.
The SafeRide system also needs to improve. This semester, a new dispatch system was implemented, increasing the percentage of students who receive a ride within the first 10 minutes by over 15% to 86% of rides. Still, some students are waiting over an hour at peak times, possibly causing them to walk when it is unsafe. I have met with the Executive Director of Public Safety to informally discuss the idea of a partnership between Saferide and Uber or Lyft. Unfortunately, this is a difficult task given the current technology, RideCell. I would advocate for a new dispatch system that would allow for collaboration with a third-party service at peak hours.