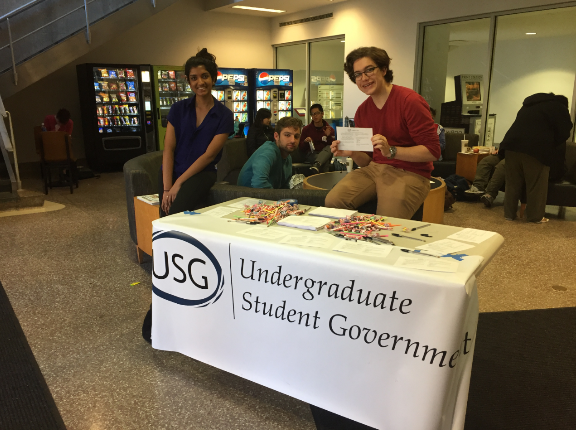 Every Friday around noon, USG representatives set up a table at the Sears Building, hand out surveys to students and answer questions regarding USG and its current projects. Led by the USG Public Relations Committee, Feedback Friday has been implemented for years and recently expanded and developed to gain a stronger presence on campus. The surveys feature topics provided by all five USG committees, including the Student Life Committee, the Academic Affairs Committee, the Public Relations Committee, the Information Technology Committee and the Finance Committee. The topics vary every week depending on the ongoing discussions in different committees and the various initiatives USG representatives undertake.

“It [Feedback Friday] is to gain more interest on different sorts of issues, such as things like getting the meal plan running again for fall break … establishing feedback on changing the Green Link Routes,” said Timothy Nicholas, the vice president of Public Relations of USG. “We just wanna engage students more often, but also we are really trying to find ways to get concrete student feedback.”

Feedback Friday is regarded not only as an platform to collect student concerns and opinions, but also an outlet for USG representatives to familiarize students with their initiatives and receive feedback that can help develop their initiatives.

“If anyone wants to get any information about anything, we will take a survey on that,” Anshul Dhingra, a USG representative who heads the program, said. “There are more than 60 members of USG. Each one of these individuals has their own initiatives to work on. So as a result, though people are in different paces on different things, the main goal is to get the most and highest quality feedback we can get from students.”

According to Andrew Thompson, a USG representative who also leads Feedback Friday, the turnout has been satisfactory. USG is typically able to get 150 to 200 sets of feedback on every survey they take. This feedback will be delivered to campus administrators by USG.

However Thompson also recognizes that Feedback Friday has its drawbacks. Since the feedback table is usually set in Sears, the survey might only cover those who frequent Sears most: first- and second-year students majoring in the arts and sciences or engineering.

As a result, USG decided to extend its surveys to Thwing Tuesday. The Thwing Center usually gathers many business majors, nursing students and upperclassmen. This different location and time makes up for the limitation of Feedback Friday and helps USG to interact with a wider range of students. “We just want more students be able to take the survey,” Dhingra said. “It’s not just a moving on the location, but really [to] keep track of the progress.”

Thompson said he thinks that this new addition to Feedback Friday has been effective: “This change taking place at the beginning of this semester really doubles down and increases the variability of responses and the number of the responses we get.”

So far, Feedback Friday has proved helpful in several decision-making processes. For example, as a result of the “take back the taps” survey in 2016, which collected students’ opinions on reducing the use of disposable water bottles, USG passed a resolution suggesting that the administration ban plastic water bottles on campus.