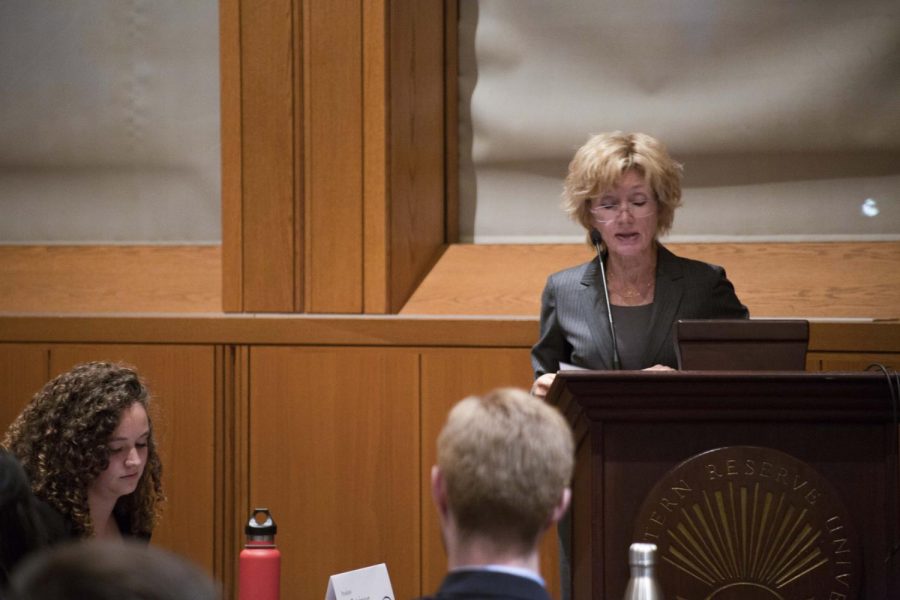 USG's biweekly general body meeting featured an open forum with President Snyder, including a question and answer session. Campus diversity and funding were discussed, as well as the CUE report.

The meeting opened with a warm welcome from administrators, who addressed administrative focuses. Areas which were highlighted include political issues, funding allocations, admission processes and faculty demographics.

According to President Snyder, “immigration, research and federal guidance on sexual assault” are among the biggest challenges universities in the country currently face in respect to administrative guidelines. The topic was also discussed later in a question-answer session, where Snyder said policies like Deferred Action for Childhood Arrivals (DACA) have been lobbied for actively and that an immigration lawyer has been hired.

“When the federal government does things that make international recruitment more difficult, the administration does everything it can to support students,” Snyder said.

She also elaborated on where donated funds are to be applied, and reported that $215 million will contribute to student scholarships and $722 million to academic programs. The scholarship campaign, however, will, “continue beyond regular campaign.”

Physical projects include a Health Education Campus, which is set to be completed in spring of 2019, the renovation of Tinkham Veale University Center, think[box] and the Wyant Athletic and Wellness Center.

President Snyder also discussed the search for a new provost following the retirement of current Provost William A. Baeslack III this June. Although the candidates will be held as confidential, the administration is set to hold an open community forum before making any official decisions.

USG President Ivy Petsinger and various faculty members currently sit on the Provost Search Committee, and President Snyder, “[hopes] to have somebody named well before Provost Baeslack steps down.”

She also addressed that in the faculty hiring process, diversity will be an important factor. While student diversity has increased significantly, faculty diversity has not. For this reason, and since faculty turnover has steadily decreased upon the last economic recession, President Snyder hopes to focus on this area in upcoming choices.

A USG question-answer session proceeded, and Class of 2021 Representative Hunter Stecko was concerned with the university’s plan to impose an application fee on prospective applicants, and whether the implications will, “have a negative impact on the number of applicants.”

According to President Snyder, “One challenge the university had was students applying just because [the application] was free.”

She also said that CWRU is one of two University Athletic Association (UAA) schools who did not impose the fee, a major factor in the administration’s decision. She also said that low-income applicants will receive an “automatic waiver.”

Stark said, “Housing has a strategic plan going forward; [the renovations] will not all happen in one year.”

Such renovations will tentatively include air conditioning.

During the open forum, which featured Faculty Senate Committee on Undergraduate Education (FSCUE) representative Garretson Oester explained that FSCUE is looking to obtain more feedback from undergraduates. Various topics discussed were retention and satisfaction rates, which are apparently low amongst rising-seniors.

Oester said, “At other institutions, there is a sense of ownership and place on campus. There needs to be more ethos, an emotional connection with the institution.”

The Provost’s Commission on Undergraduate Experience recently released a report that touched on this issue. The commission is requesting feedback from the campus.

Petsinger, who was especially pleased with the forum,  said, “Priorities for each [USG] committee are still being made, but the fall agenda will be set soon.”

“I am most looking forward to working towards upholding USG to be an organization that cares about all students,” Petsinger said. “[One] that responds to students when they need a response, and that works collaboratively with other individuals, organizations, offices and members of the community that have similar missions, passions and interests in advocacy and initiatives we are working on.”