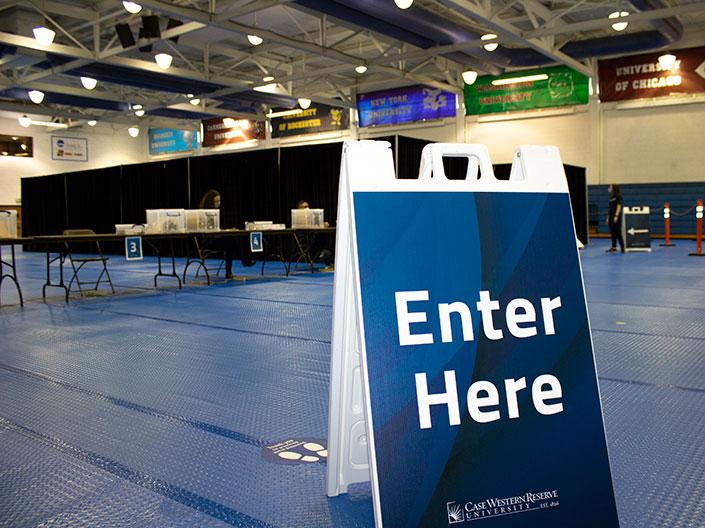 On Monday, March 29, all adults in the state of Ohio became eligible to receive the COVID-19 vaccine. Several facilities close to the Case Western Reserve University campus, such as the Wolstein Center at Cleveland State University in downtown Cleveland, are open for students to receive the vaccine.

As of Monday, Phase 2D of Ohio’s vaccine distribution process began. Efforts to administer vaccines produced by Moderna, Pfizer and Johnson & Johnson to the general public began in early January, when Governor Mike DeWine announced that, starting Jan. 19, Ohioans ages 80 and older would be eligible for vaccinations. Since then, over three million vaccines have been administered to the public; roughly 28% of the population has at least received their first shot and, with the push for Phase 2D, the majority of the population is expected to be vaccinated over the span of the next two months.

Across the state, 18 mass vaccination clinics have opened up, including the Wolstein Center in downtown Cleveland for residents in Northeast Ohio. The Wolstein Center will be open from March 16 to May 10 for a total of eight weeks; during the first six weeks, the center will administer the Pfizer vaccine, which requires two separate shots spaced out over three weeks. Ohioans who are eligible for the vaccine can sign up for an appointment through an online portal found on the Ohio government website. At the appointment site, Ohioans should bring their ID, healthcare information and proof of eligibility.

The university has worked with the city of Cleveland to help administer vaccines to eligible individuals in the Cleveland community. Starting on March 4, CWRU began to administer vaccines, setting up a vaccine site at the Veale Convocation, Recreation and Student Athletic Center. Since then, students and community members have volunteered to distribute vaccinations to those who serve the city in specific roles, such as those working in child care or clinical care operations. Because of the start of Phase 2D, CWRU was granted permission to begin administering the vaccine to eligible students, starting on April 2.

“The university’s experiences administering campus-wide COVID-19 testing, as well as visits to other vaccine distribution locations, helped inform the approach to creating our own vaccination site. The effort involved broad coordination among several campus units (health services, resilience, public safety, facilities, [U]Tech, and more), as well as volunteers from across the university,” the university announced.

Vaccinations will not alter plans at CWRU for the remainder of this semester. Diploma ceremonies will be held in-person at Freiberger Field, but restricted to graduates and faculty attending the event. However, vaccination efforts across the state of Ohio will undoubtedly affect the university in the upcoming fall semester. Though the university is hesitant to release an official statement at this time, students have speculated that, with the majority of Americans projected to be vaccinated by August, many traditional in-person activities, such as club gatherings, larger in-person lectures or other social and academic gatherings, could restart again.