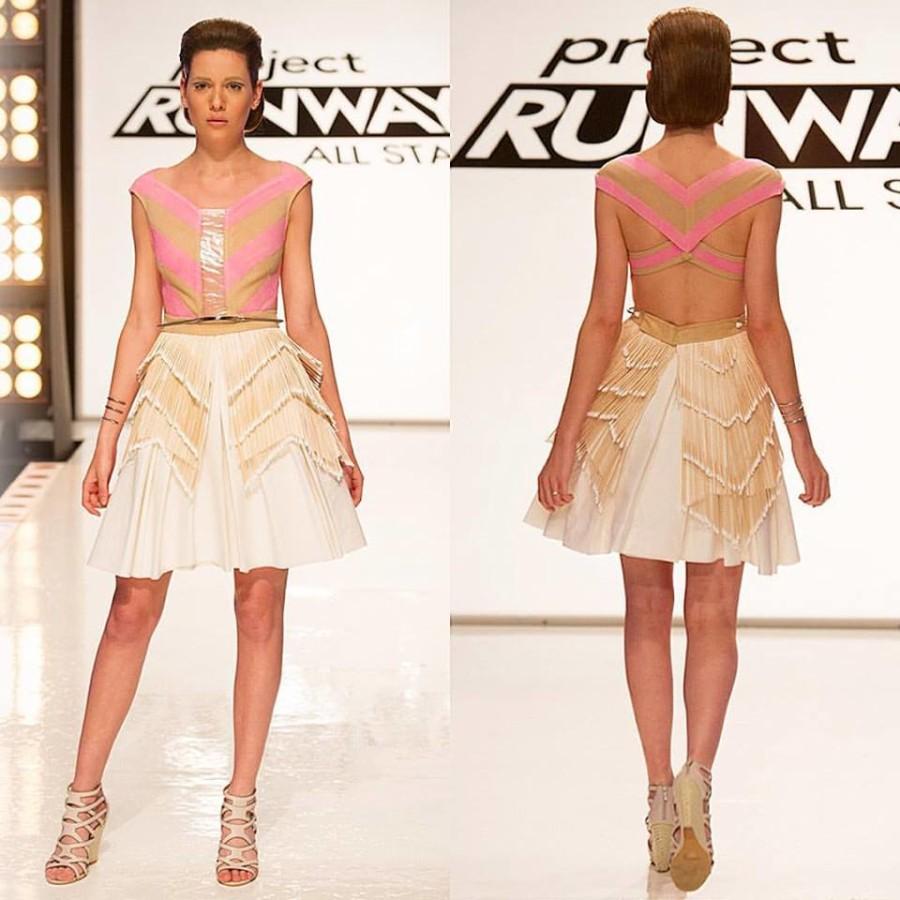 A Valerie Mayen look from Project Runway All Stars made from EMT supplies.

Most designers would be caught completely off guard by a task like making a garment entirely out of cotton swabs, bandages, safety towels and a thermometer wrapper. But for Valerie Mayen, it’s no problem.

“I love working with unconventional material,” says Mayen. “If you have the same canvas every day, it’s easy to develop a creative block. Nothing gets creativity going like having to use EMT supplies to make a garment.”

Remarkable creativity is just one of the qualities that makes Valerie Mayen an all-star.

Mayen is a Cleveland designer who has appeared not once, but twice on the popular TV show “Project Runway.” Her first experience on the show was in season eight. This year she returned as one of the selected cast members for season five of Project Runway All-Stars.

As a graduate of the Cleveland Institute of Art, Mayen always knew she wanted to be a designer. But she really never started sewing until she was 26 years old. “Before I went on the show I didn’t know how to make a suit. I had never sewn a swimsuit. I had never made a pair of pants. So, I had to teach myself a lot,” said Mayen.

But despite being relatively new to some of the technical aspects, Mayen did well in season eight and enjoyed her time on the show. “My first experience was great. I made some really good friends that I still talk to today,” she said.

They still get together occasionally, which Mayen describes as a “family reunion.”

In the time since Mayen’s Project Runway debut in 2008, she has been busy. She designs in Cleveland as the head of her company, Yellowcake Shop. Each year, she puts on a big event called Hullabaloo. It’s an exciting runway show, which features 30 to 50 new looks. As a proud and involved community member, Mayen donates proceeds to local charities. She also notes that putting on her annual Hullabaloo shows was helpful in preparing for All-Stars: “For any Hullabaloo, I’m making anywhere from 60 to 90 pieces total. And you have to do those pretty quick,” said Mayen.

Mayen feels that she has come a long way since her first time on the show. She compares that experience to feeling like a freshman in college, and her second time to feeling like a graduate student. “I developed more of a polished aesthetic, and I’ve also developed more efficiency in my sewing,” she commented on her evolution as a designer. Where Mayen saw the biggest difference was the development of her personal design aesthetic. She said of her experience on All-Stars, “I was still offering variety and something of interest each week, but it was still apparent that is was mine, it was my aesthetic.”

During her time on All-Stars, which is currently on TV, Mayen was especially proud of her finished products and her originality of garments on the show. “Every garment I made on All-Stars, originated on All-Stars. There was nothing that I had made before,” she said.

Not to mention that each of her garments were made with such high-quality craftsmanship. The judges certainly thought so, as she won the first challenge of the All-Star competition.

Back in Cleveland, Mayen has a few favorite spots that she goes for inspiration. She especially likes going to Edgewater Park to walk her dog and be around people. And “The museum, of course. Everyone loves the museum,” she says, referring to the Cleveland Museum of Art.

She also has an unconventional go-to spot in Cleveland: “There’s a tiny little spot by the Municipal Court House. There’s a little garden bed that’s empty; it’s overlooking the Rock Hall and the Lake.”

She loves going there at sunset to relax and think. She also is inspired by music and film, noting that the Cleveland International Film Festival is one of her favorite events to go to in Cleveland.

Looking towards the year ahead, Mayen will be focusing on “higher-end, polished outerwear” for Yellowcake Shop. Right now, her website is featuring sleek trench coats which will also become available in select boutiques.