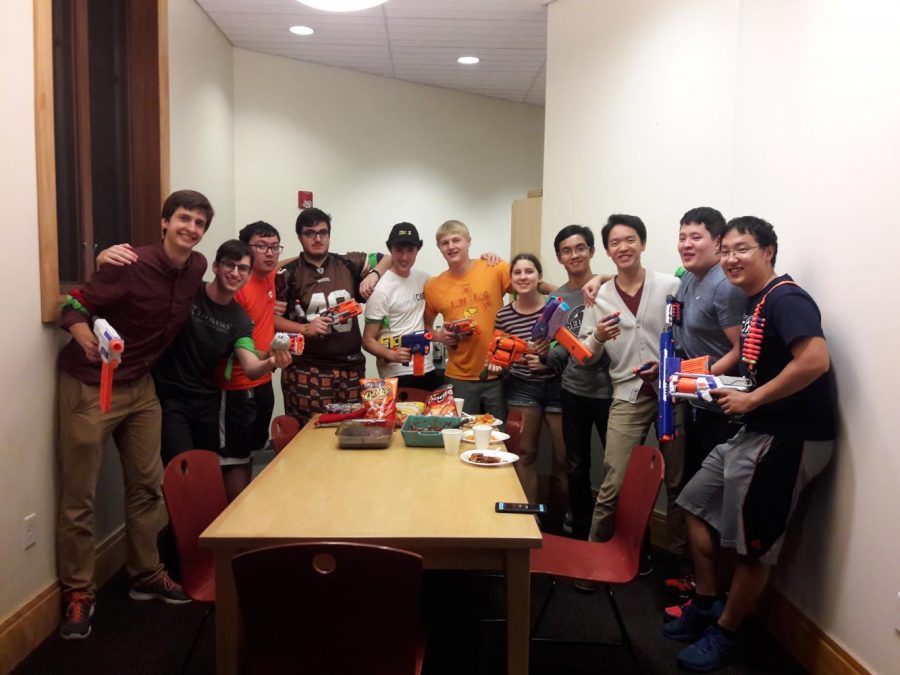 HvZ players conduct a secret strategy meeting. The game has been played at CWRU nearly every semester for seven years.

For the past seven years, Case Western Reserve University students have been participating in a 10-day long campus wide game of tag. The game, Humans vs. Zombies, according to club records, was started at Goucher College in 2005 and has then spread across the United States and around the world.

Christopher Gittings, a four-year core member of Humans vs. Zombies, says that he joined the club because he “appreciated what it represents: The whimsical side of the college experience.”

This year, Humans vs. Zombies has 277 participants, not only undergraduate students, but graduate students, Cleveland and CWRU community members and even a few professors. The club reports an uptick in participation in recent years, as the game has gained popularity.

Humans vs. Zombies has maintained a close relationship with university administration to make sure that the game played at CWRU “maximizes the game’s safety and adventurous qualities for the players and the larger campus community”, according to Gittings.

As stated by the Humans vs. Zombies rulebook, “If play is occurring around non-players, take care and never bump, run into, or engage them in the game in any way. They are not playing and have not consented to any form of activity related to HvZ.”

Gittings, who has played in six Humans vs. Zombies games, believes that it is a “CWRU tradition which has become an integral part of the student experience for many in our community.”

The club encourages new members to participate, and Gittings says that it should be on everyone’s bucket list.

“When I am hiding behind some bushes at midnight … the game becomes an entirely new experience,” Gittings adds, “Humans vs. Zombies isn’t an excuse for students to run around campus with headbands and blasters; it’s an intensive 10-day exercise in teamwork, creativity and survival for both sides. Every player has a riveting story about something they observed or experienced during their time as a player. I will personally take those memories with me when I graduate.”