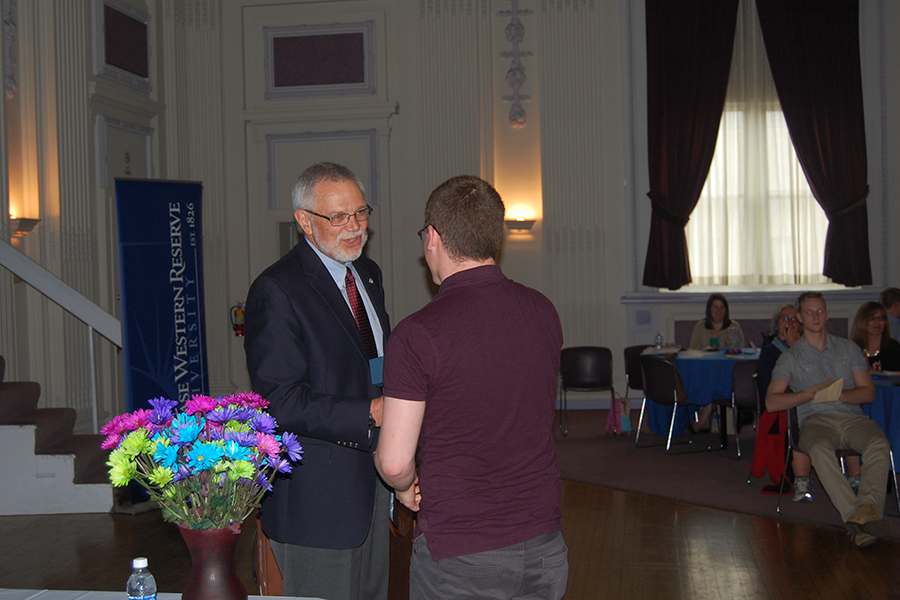 Long-time vice president for student affairs Glenn Nicholls presents James Silay with the outstanding junior award at Tuesday’s Dorothy Pijan Student Leadership Awards ceremony. Nicholls, who will be retiring at the end of the year, was honored at the ceremony with the creation of the Glenn Nicholls Award for Ethical Leadership.

Glenn Nicholls reflects on a quarter century of service at CWRU

When Glenn Nicholls, vice president for student affairs, first arrived at Case Western Reserve University, the campus was a different place. Long-demolished buildings still stood, the Internet – then “CWRUnet” – was just being installed, and cc’ing a colleague required a sturdy pen and carbon paper.

While the scenery and technology has changed, many would argue the student body’s administrative advocate has not. This past Friday – in between policy revisions and staff meetings – Nicholls shared reflections on more than 25 years of service and his predictions on what lies ahead for both himself and the university.

Another day at the office

On an otherwise routine Sunday afternoon in June 1991, Glenn Nicholls returned home to see the red light flashing on his answering machine. The resulting message relayed that flames were billowing from Adelbert Hall, which housed the office of the president and the majority of his cabinet.

Nicholls, who worked in Yost Hall, arrived Monday morning to discover he was one of the few campus administrators who still had an office. He witnessed campus leadership clinging to their briefcases, because it was the only thing they took home with them for the weekend. “It was one of those mornings when I thought ‘I’m just going to listen,’” he said.

The fire displaced twenty university offices, and their analog phone lines were re-established along tables in Crawford 13 and 14 so the business of the institution could continue. “It really was remarkable,” Nicholls said. The fire caused an estimated $10 to 15 million in damage, and many offices never returned to the building. The Office of Student Affairs was added as a new tenant.

Nicholls’ office, with its Dell desktop computer and flanking wing-backed chairs, serves as an interesting representation for how both he and the university have changed this past-quarter century. New technologies and pedagogies have arrived, but Nicholls’ focus on listening rather than demanding has remained.

Looking to the past and present

“The Village at 115 is something I feel especially good about and for a whole lot of reasons,” Nicholls said, gazing reflectively to the corner of his office. “For one, it’s just a great facility. But even more importantly, it was the product of a long process of a lot of conversations with students about the nature of their experience, the kind of experience they wanted to have, and our belief… in the progression of the undergraduate experience.”

The construction of the Village at 115 and these conversations with students led to the residential experience students have come to know, with a First-Year, Second-Year, and Upperclass Experience.

According to Nicholls, one of the biggest changes he has come to observe is the increasing number of students who will engage in these experiences.

“For years, we had classes of 700 to 800 students,” Nicholls explained. “Then we made the decision to grow to 1000, and now we’re making a decision to grow more, and it makes a real difference,” he said.

Nicholls explained this change represents a good move for the university, though he understands there will be related growing pains. “There were growing pains when we went to 1000,” he noted.

He realizes the university will need to develop additional space to accommodate the students and explained contingency plans are in place depending on how large the next first-year class is. “The timeline will be uncomfortable, but we’ll get there,” he said. “When you work on it, other alternatives pop up.”

He does not believe this will be a major hindrance on the next vice president for student affairs, though. “I see my successor having a lot more opportunities than challenges. This is a tremendously interesting time in higher education,” he said, citing recent revelations such as Massively Open Online Classrooms (MOOCs).

During his time at CWRU, many students have come to know Nicholls for his quiet voice and unhindered advocacy for students. This past Tuesday at the Dorothy Pijan Student Leadership Awards, Undergraduate Student Government president James Hale complemented Nicholls for his non-authoritarian leadership style and championing of the student voice.

“I would hope to be that sort of [person],” Nicholls said. “It makes too much sense to understand [students] and be an advocate for them.”

As he prepares to step down from his position, Nicholls expressed confidence in his team, who will continue to advocate for students after his retirement. “I have had the privilege to work with a lot of really good people and experienced, committed leadership,” he said. “The next person in my role will have this benefit.”

When asked what advice he would give the next vice president, Nicholls recommended they “get acquainted with, appreciate, and respect the staff and students and the strengths they have.”

“Don’t be afraid to make changes,” he added. “It would be a tragedy to not change things because they have been around for a long time. You need to learn the campus, know its strengths, and understand its bumps and wrinkles.”

An avid fan of hiking and national parks, Nicholls is looking forward to spending more time outdoors while periodically managing special projects for the university. He also wants to travel to the only state he has yet to visit: Mississippi.

With that, the eyes of CWRU’s best listener creased behind silver-framed glasses as he began reciting a poem by Jim Harrison. Already memorized, it was the first poem he read from a seres of volumes givem to him at the Students Who Make a Difference Luncheon.

In the Upper Peninsula of Michigan
and mountains of the Mexican border
I’ve followed the calls of birds
that don’t exist into thickets
and up canyons. I’m unsure
if all of me returned.