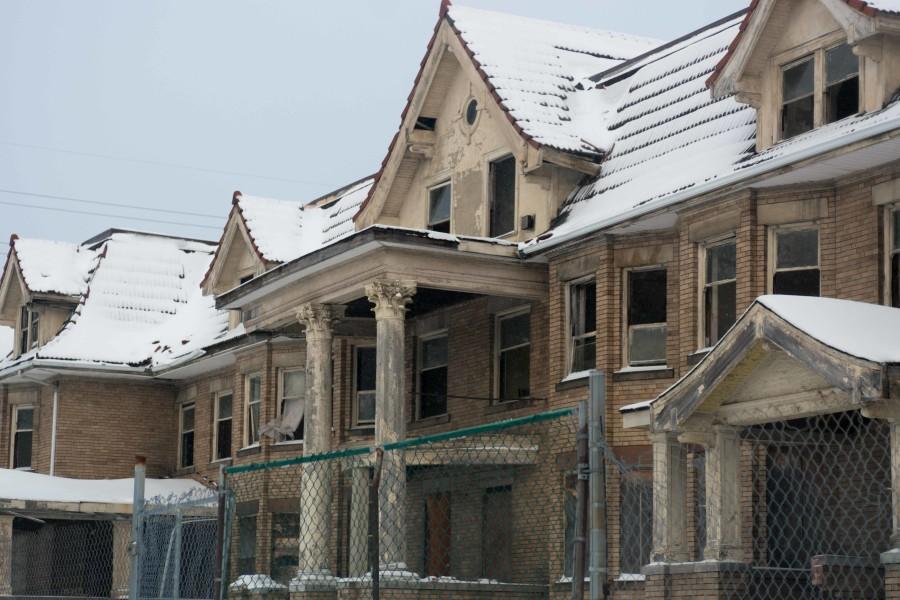 Some of the East Cleveland residents whose oral histories were collected for the Voicing & Action Project remarked on how East Cleveland has transformed from the "walking community" it was in the past.

In its early stages, the project that the Social Justice Institute (SJI) recently released on YouTube and began teaching as a curriculum at Shaw High School was simply known as the “Debut Collaborative Project.” All its organizers knew was that they wanted their first project to involve curriculum and research and that community had to be central.

Gradually, it took shape. It became a collaboration with residents of an unspecified community to talk about their visions for that community’s future. That then turned into collecting “oral life narratives” from residents of the nearby East Cleveland. The project then gained its name: the Voicing & Action Project.

According to Social Justice Institute Founder and Director Rhonda Williams, East Cleveland was chosen because it allows those working on the project to consider questions that relate to the university, economic and racial inequality, how neighborhoods are stereotyped and how to challenge those stereotypes.

East Cleveland’s infamous economic decline began in the 1960s, according to the Encyclopedia of Cleveland History—a timeline also reinforced by many residents in their interviews for the Voicing & Action Project. Currently the 3.9 square-mile city has an average per-capita income of $13,902, which is about half of Ohio’s average. Its homeownership rate and the value of the average owner-occupied house are also about half of Ohio’s average.

This project, which took the form of over 80 interviews and five community dialogues, was funded by various departments within Case Western Reserve University and completed in collaboration with the East Cleveland Public Library and the Northeast Ohio Alliance for Hope (NOAH).

The SJI began recruiting interviewers who either lived in East Cleveland or had a strong connection to it through community partners and word-of-mouth in early 2012, and they ended up with 14 interviewers. They then did about six months of training which covered interview skills, the ethics of studying human subjects and how to use video equipment.

Interviewers also received a “nominal” stipend, according to Williams.

“If I had real deep pockets I would pay them much more,” she said.

For another one-and-a-half years after that training period, interviewers remained involved in the program. They met in a group every two weeks in the beginning and then once a month after they had gained more experience. They also conducted the interviews, which lasted anywhere from one to three hours, plus setup and takedown.

Brandon King, an interviewer and East Cleveland resident, learned about this project through NOAH, where he volunteers, before it was even off the ground. He joined its steering committee and helped it to take shape.

King conducted over 20 interviews, and even though he has lived in East Cleveland his whole life, he said that he learned a lot of new details about the city’s history. In particular, it stood out to him that it used to be a “walking community,” where residents felt comfortable walking to work, school or wherever they needed to go.

”That’s what drew me to the project—capturing the richness and the history of the transformation of East Cleveland and its residents,” said King.

By the end of the interviewing portion of the project, there were about 85 interviews with East Cleveland community members and 10 with interviewers who continued to participate regularly in the project. Interviewees covered a wide range of people, including a local firefighter, the band director from Shaw High School and current and past local politicians. Most of the interviewees were older residents who had lived for a long time in East Cleveland.

Jacqueline Gillon, who was a city councilwoman in East Cleveland from 1987 until 1993 and remains active in the local community, was one of the interviewees.

When she was young, her parents lived in East Cleveland and worked for Fisher Body Ohio Company, a branch of General Motors which had two plants that together employed up to 7,000 workers from around the Cleveland area. As Cleveland as a whole de-industrialized, one plant closed in 1983 and the other in 1993.

In her interview, she spoke of one particular memory from her youth, of taking the bus home to East Cleveland with a basket full of freshly picked vegetables.

“It was fine,” Gillon said. “I didn’t feel afraid, threatened, none of that. Because there was a sense of safety and community.”

The interviews covered a variety of subjects, including people’s personal history and how they ended up in East Cleveland, the impact of injustice (especially racism) in their personal lives and on the city and what their visions were for the city’s future.

In those visions, East Clevelanders tended to agree that they wanted a more vibrant community with few vacant houses and more green infrastructure and gardens. They also voiced unhappiness with the impact that some systems—government and business—have on their city.

Solomon Mathes, a music education major at Baldwin Wallace University who lived in East Cleveland up until he left for college, was also interviewed for this project. He said in his interview that when he was young, he was required to be back to his house or close nearby by 8 p.m. because the area was too dangerous to stay out later.

In the future, he wants to come back to East Cleveland and run a business or organization involving music, where he will employ other East Clevelanders.

The interview style for the Voicing & Action Project was open-ended, with plenty of follow-up questions, so each interview went a little differently.

“They told stories about the history of race relations in East Cleveland and Cleveland, change over time, the demographic change over time, white flight, the struggles of getting access to housing as African Americans in a once majority white suburb,” said Williams. “There’s all kinds of information in these interviews.”

The SJI also held five community dialogues, with a total attendance of about 150 people, with NOAH. There they presented some clips from the interviews as a way of starting a discussion on community issues.

For Misty Luminais, research associate and project coordinator for the SJI, one of the most memorable moments of this project took place at one of the community dialogues.

“People really grasped onto the idea of changing the narrative,” said Luminais. “And it was something that a lot of people had felt and people had kind of articulated in the interviews, but to see everybody in the room come together around the idea of owning their own narrative … that was a really powerful moment for me to see the community come together around that and really embrace that idea.”

Beyond documenting East Clevelanders’ experiences, this project also aims to create an analysis and dialogue about systems of oppression and to work towards finding solutions.

“It’s about looking at root causes, and it’s also about moving towards action,” said Williams.

One of those actions was creating a YouTube channel with all of the interviews. Another is working with the East Cleveland Public Library to make an Omeka platform, as a more interactive platform where others can view the videos and add their own content. A third action is the creation of a curriculum for students at Shaw High School.

The curriculum will be taught by Luminais, Williams and others , and will incorporate the results of the Voicing & Action project in several ways. It will be a ten-week program within an 11th grade African American history course, and will focus on local history and social justice, ending with each student creating an action plan for something they can do to improve their lives and communities.

From this project, along with the the many other organizations currently working in East Cleveland, its organizers hope that positive change will result. However Williams was hesitant to speak too optimistically; for her, the future very much remains to be seen.

“Whatever happens in the community, I hope it has equity and justice in the core, and I hope people in the community actually have a say in what that is and that they are able to benefit from it,” said Williams.