Volleyball 7-6 after loss to Heidelberg

Team looks to improve at Carnegie Mellon Invitational this weekend 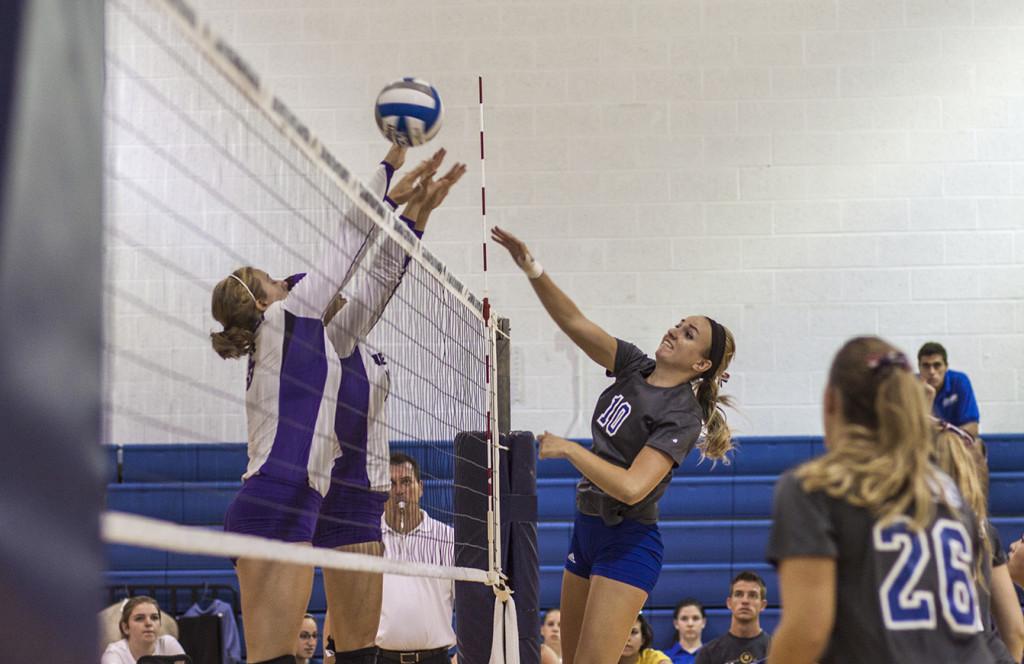 Sophomore Haley Kauffman goes up for a block as teammate Carolyn Bogart looks on during a match versus Capitol on Septermber 7th.

The Case Western Reserve University volleyball team boasts a winning record after a successful weekend at the Purple Raider Classic followed by a loss against Heidelberg College last Tuesday which brought their record to 7-6. The team hopes to improve after the Carnegie Mellon Invitational this weekend.

The Spartans swept the competition on their way to an undefeated weekend at the Purple Raider classic hosted by Mount Union University. The ladies won nine of their 12 sets against the competition resulting in a 3-0 result through the event.

The Spartans opened up against Transylvania University last Friday. After dropping the first set with a score of 14-25, the team went on a run in the middle of the second set, edging out a victory 25-22. The third and fourth sets went in the same way with the Spartans losing the third 18-25 and fighting back in the fourth to win with a score 25-20 and force a fifth set. The team dominated from the start of the set, holding on for a 14-16 win.

The second day went a little smoother for the Spartans. On Saturday morning, the team faced off against Kalamazoo College. The ladies dominated in the first and second sets, opening up with scores of 25-12 and 25-18. The Kalamazoo team rallied for a third set win 27-29 before the Spartans shut them down during the fourth set with a score of 25-9. The confident playing by Southard and Kauffman continued as both ladies had double-digit kills in the match and very few errors.

Gurd had 48 assists and Sophomore Katie Best led on offense with 28 digs. The ladies went into the following match against Hanover College with confidence and demonstrated their skill in a straight-set win. With set scores of 25-18, 25-13 and 25-21, several Spartans posted great numbers during the match, led by Southard on offense with 12 kills and Best on defense with 15 digs.

The tournament provided the team with a great opportunity to bounce back against a tough loss against Mount Union University last week and some uneven play in previous matches. Moyers was named to the all-tournament team for her contribution of 21 kills and six blocks on the weekend, Southard was named University Athletics Association Volleyball Co-player of the week and many of the more inexperienced players on the team got into a rhythm with consistent play and success against opposing teams.

Coach Karen Farrell was happy with the team’s showing, including a great deal of skill and talent against competitive teams, and expressed a great deal of optimism going forward. “Any time we play well, we can win matches” Farrell said, “It means we have balance in the attack and consistency at the team’s core.”

The team looked strong heading into the match against Heidelberg University on Tuesday and got off to a quick start, winning the first set 19-25 after going on a 13-3 scoring run at the beginning of the set. However, with Heidelberg competing well against nationally-ranked opponents, the Spartans knew not to get too comfortable. The tables were turned in the second set with Heidelberg putting together multiple scoring streaks leading to a 25-15 win over the Spartans. The oppressive offense left the team with little time to gain momentum against the dominant team.

That trend continued as the Spartans dropped a close third set 25-23 before the ladies rallied for a fourth set win by the same margin. It all came down to a fifth and final set where the Spartans fought from point to point against the Heidelberg team before eventually losing the set and the match 17-15.

The match was competitive throughout with superior playing by all the starters. Gurd contributed another double-double, Southard, Kauffman, Moyers and freshman Isabelle Wagner all posting double-digit kills and Best, Mitchell and freshmen Julie Colianni and Shannon Chua all showing double-digit digs.

The team looks to continue competitive play at the Carnegie Mellon University Invitational this weekend. The competition features many regional teams and gives the Spartans a chance for revenge against Geneva College after a tough loss early in the season.