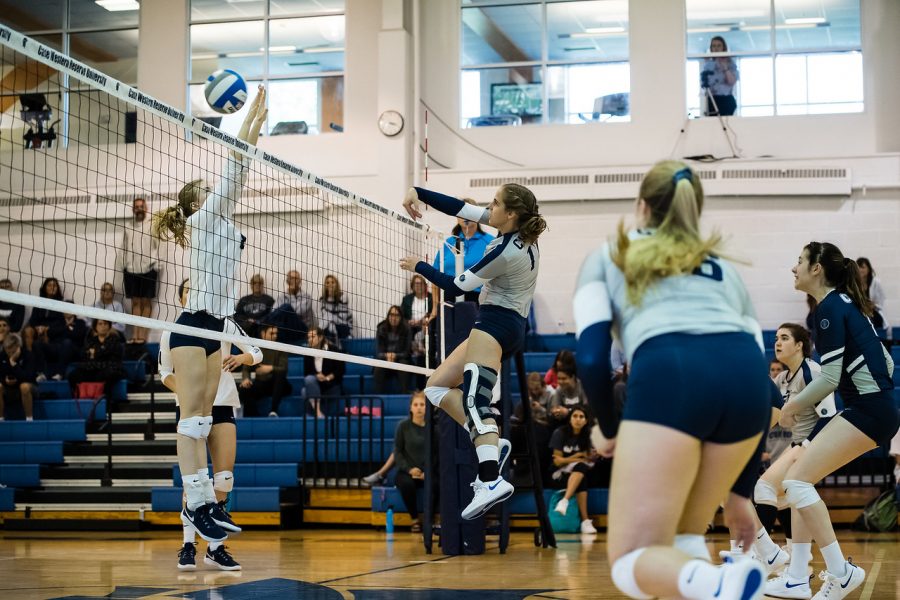 The Spartans take an offensive stance during their game

In their final action of the 2019 season, the Case Western Reserve University volleyball team secured a fifth place finish at the UAA Championship tournament, ending with a 13-16 record.

The Spartans opened the tournament with a tough first-round match-up against Washington University in St. Louis. CWRU, who entered as the sixth seed, lost in three sets to their third-seeded rival.

Against the Bears, the Spartans’ defense held up decently well, totaling nine block assists. However, the offense couldn’t put together an efficient game, accounting for a mere 0.063 kill percentage. Fourth-year middle hitter Haley Sims led the team with seven kills.

The rest of the weekend went much more smoothly for CWRU. The same day, they faced Brandeis University and swept them in straight sets.

Sims had an excellent game: she notched 10 kills on 15 attempts, good for a .667 kill percentage. First-year setter Sara Rogers led the team with 20 assists, and she added seven digs to her stat line as well. Defensively, the team combined for 16 block assists in this match.

In the concluding game of the season, the Spartans won a competitive match over New York University, 25-23, 25-16 and 29-27. Sims again recorded 10 kills, and fellow fourth-year outside hitter Brianna Lemon ended her career on a high note with 11 kills. Third-year right side hitter Jana Giaquinto had a solid game with 18 digs.

Although the team did not live up to their preseason expectations, Head Coach Karen Farrell was not disappointed with her team.

“The season overall was an uphill climb with early season injuries and losing so many five-set matches,” she said, “but the team never gave up trying to improve and players approached practice each day with a positive outlook.

With this season coming to a close, the Spartans will begin preparing for the 2020 season in the coming months. Although they will lose key players Sims, Lemon, fourth-year outside hitter Karley King and fourth-year setter Faith Ellis, they will return a solid core of players. Moreover, third-year libero Anna Jaskoviak will return from injury, adding a spark to the back row defense.

“We have a lot of work to do to move the program forward and compete with the top teams in the region and in the UAA in nine short months,” Farrell said. “There will be many opportunities to earn spots in the rotation for returning players who improve their competitive levels and for incoming players who demonstrate a high level of consistency and execution in their play.”