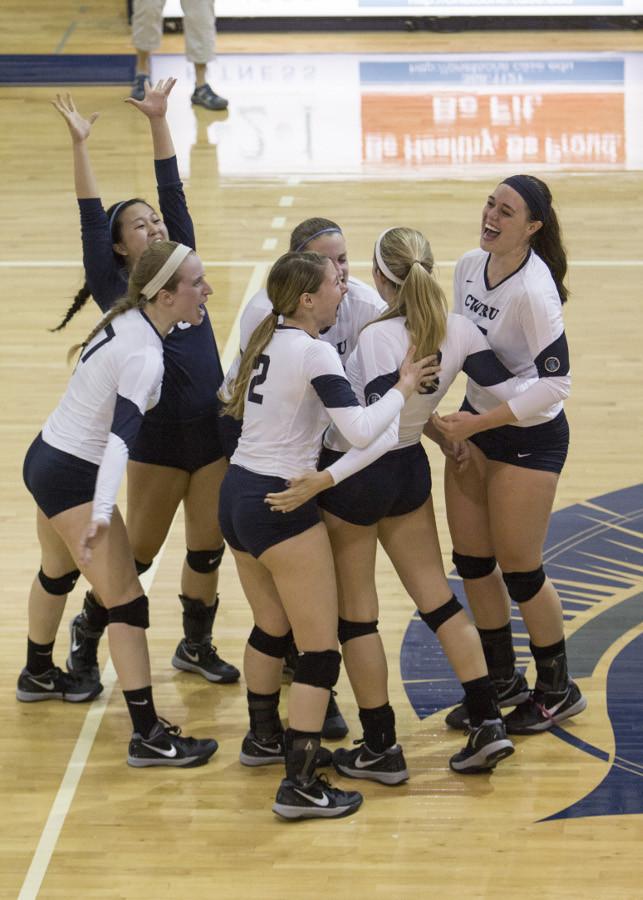 The Volleyball team celebrates last season after a kill. The Spartans had a lot to celebrate as they swept their four games this weekend so start the season 5-0.

Pull out the brooms. Case Western’s women’s volleyball team swept the Otterbein Classic in Westerville, Ohio this past weekend, winning all four games and continuing their hot start to the season.

Regarding the team’s strong effort, Coach Karen Farrell said, “At the Otterbein Tournament we played some teams that had a lot of inexperienced players on the floor, and I think that gave our team an advantage.”

After a tight match against John Carroll University last Tuesday, the Spartans utterly dominated the Otterbein Classic. The Spartans opened the tournament against Kenyon last Friday. Following a competitive first game, CWRU increased its intensity with a ridiculous 0.417 hitting attacking percent in the second game to win by 17 points. The Spartans handily closed out the match with a 25-16 victory in the last set behind the strength of a 6-1 run to pull away towards the end of the set.

Senior setter Robyn Marks spread the wealth with her 30 assists leading to 60 percent of her teammates’ points. Junior hitters Kayla Pfaff and Marian Barton added a combined 20 kills to lead the offensive attack.

Immediately after, the Spartans played tournament host to Otterbein University. In their closest match of the tournament, CWRU dropped the first set 19-25, unable to recover from an early deficit. However, CWRU rebounded to take the next three sets in a row, 25-22, 25-22 and 26-24. Falling behind 16-17 in game two and in danger of dropping the first two sets, CWRU’s hitters powered a 6-0 run that ultimately led them to victory. Following a win in the third set, CWRU received a scare in the fourth, blowing a 19-12 lead to Otterbein. Despite a strong effort by Otterbein to claw back to even the score at 24, Otterbein made two errors to hand the Spartans the match.

On Saturday, the team tallied two more wins against Berea and Capital, winning both matches 3-0. Against Berea, Kauffman once again posted 12 kills to lead the team to a 25-16, 25-20 and 25-11 victory. The team then demolished Capital University to conclude the tournament, winning 25-8, 25-14 and 25-13, behind a 0.274 kill rate. Hitter Bogart was specifically in attack mode in the Spartans’ last game with 12 kills on 28 attempts.

Despite a tremendous effort by the Spartans at Otterbein, Coach Farrell believes the team has plenty of room for improvement. She said, “Going into this weekend we are still looking for more consistency in our attacking and turning a percentage of our attacking errors into points,” adding that, “We also need to improve our serving effectiveness to put our opponents out of system.”

The team hopes to correct these mistakes against Buffalo State this Friday at the Marcia French Memorial Invitational.