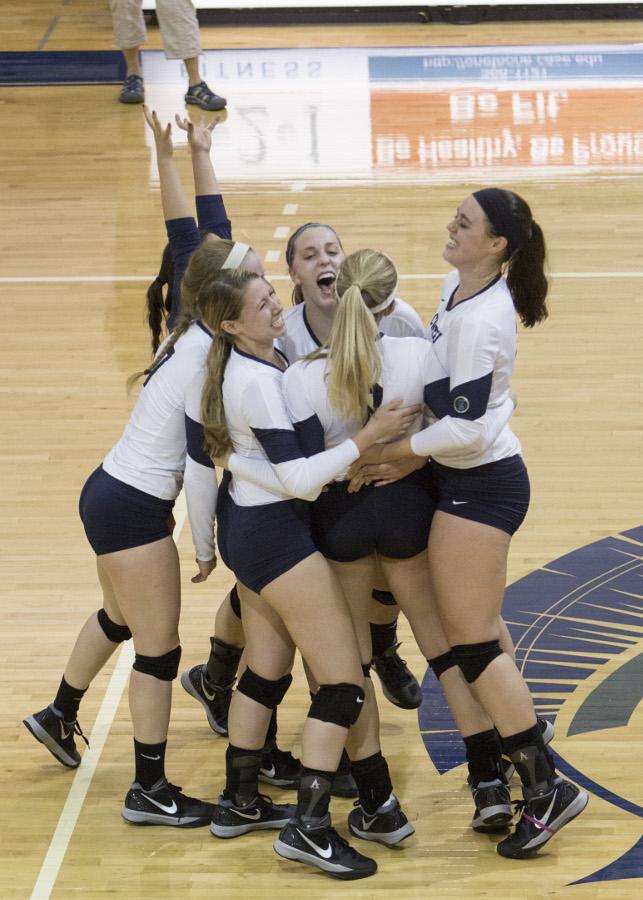 The Spartans rode the roar of the home crowd to victory Tuesday night.

After a weekend off following the first of two UAA round robins, the Spartans returned to the court to win a hard fought battle against Hiram College. The match was the Spartans’ last this season in Horsburgh Gymnasium. The win brings the Spartans to a 12-7 record on the year and to a 6-0 record on their home floor.

The Spartans battled for their win, and rallied after finding themselves with their backs to the wall on multiple occasions during the night. The match went all five sets with the Spartans winning the second, fourth and final and deciding set.
The first three margins of victory were large with the Terriers stealing the first set by a score of 25-17, and the third 25-19. However, the Spartans took the second set decisively, 25-16 and forced the final set in a thrilling 29-27 finish in the fourth set.

The fifth and final set saw the Spartans facing an 8-2 deficit. A string of kills from Danielle Wirti, Katie Best, and Jessica Justice secured the set and the match for the Spartans in dramatic fashion, winning by a score of 15-10.

Carolyn Bogart and Kayla Pfaff led the Spartans offensively with each putting up 13 kills. Haley Kauffman added another 11 kills of her own and setters. Justice and Lauren Gurd put up a season high 25 assists and another 18 assists respectfully.

Gurd also added 16 digs to reach her first double double of the season and her sixth as a Spartan. Best added 18 digs of her own to the stat sheet and Justice’s 13 digs earned her her first personal collegiate double-double.

The Spartans will spend the closing weekend of homecoming on the road as they face off against their remaining UAA rivals at the second round robin tournament of the season, this one being held in Chicago. The Spartans play their four final conference matches as they face off against Brandeis, University of Chicago, and Washington University in St. Louis and New York University over the two-day tournament. The hosts, Chicago and Washington will be the hardest competition the Spartans will face as they try to climb in the UAA standings. The Washington Bears are ranked seventh in the nation and the hosting Maroons were just displaced from the top 25 list, but are still a top tier volleyball squad.

The Spartans will start the tournament against Brandeis Saturday morning at 11:30 a.m. before taking on the Maroons at 3 p.m.