Drops only one set at CMU Mini Invitational 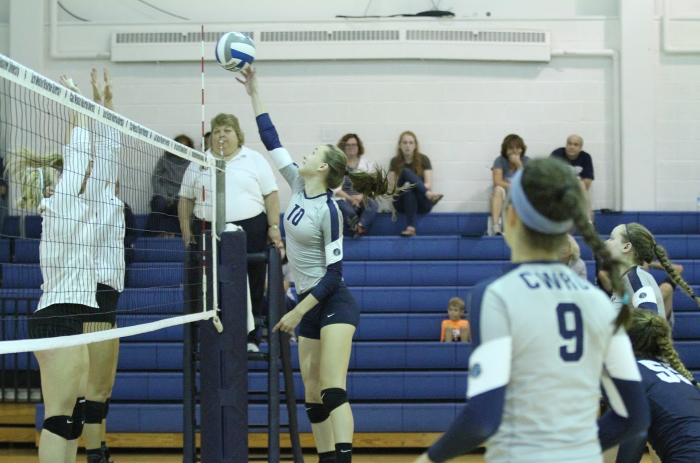 Karley King looks on as Haley Sims reaches for the ball, trying to bury a kill past two defenders.

To kick off their fall break, the Spartan volleyball team replicated the winning methods they had used earlier in the season. They played three opponents and lost only a single set in all three matches. The entire weekend of games took place in Pittsburgh, Pennsylvania, at Carnegie Mellon University’s (CMU) campus in the CMU Mini Invitational.

The previous week had ended in a less than ideal manner for Case Western Reserve University. To bounce back from the two losses the team had suffered on Oct. 16, the Spartans played with ferocity and determination. These two qualities led them to win three matches in a row from Oct. 21 to 22. Head Coach Karen Farrell was impressed enough by her team to say, “This weekend was the first time the team has demonstrated that we could maintain a consistent, high level of play from set to set and match to match.”

On Oct. 21, CWRU played against the Rochester Institute of Technology (RIT) Tigers. Starting out, the Tigers took the first set by a narrow margin of 25-21. But the Spartans did not allow this to happen again for the rest of the weekend. First-year outside hitter Brianna Lemon led the charge, scoring 20 kills as her team went on to win the match with a commanding 3-1 score. On defense, second-year libero Karina Bondelid did not allow RIT to score on her watch, as she finished the match with an intimidating 15 digs. This was just the beginning of a weekend full of wins for the Spartans.

To start the next day, CWRU took on the Messiah College Falcons. The Spartans had their second largest set victory of the weekend during set two of this match with an incredible 25-13 score. The match started and ended with the same story: The Spartans were on fire. Lemon and her teammate, first-year middle hitter Haley Sims, led the team with eight kills each. On defense, second-year defensive specialist Emily Wolfenbarger also tied with Lemon, each recording nine digs. The Falcons’ fourth-year defensive specialist and libero Emily Zellers recorded fantastic numbers with 21 digs.

The team went into its third and final match of the weekend after winning six consecutive sets. The Spartans played against the Elizabethtown College Blue Jays to finish their run in Pittsburgh. From the very beginning of the match, CWRU showed no mercy. The team won the first set by a deflating 25-12 margin, leaving the Blue Jays wondering what to do next. The next two were closer, but the Spartans still won them. Again, Lemon led the team in kills with 10, and Bondelid led the team in digs with 11.

Overall, the team played with an amazing determination throughout the entire weekend. Farrell said, “I think the confidence of our individual players has improved and our team focus and understanding of how to control the match with our own play was very evident this past weekend.”

The next two matches for the Spartans are in Wooster, Ohio on Oct. 29 against Denison University and the College of Wooster. The winning mentality that the team has at this moment is promising, and victory is more than just a dream at this point.

Farrell warns, “A few players will have to step into new roles.”

“Everyone will have to continue to execute at the highest level we are capable of to win two matches,” she said. Farrell added that these next games are important in order for the team to “achieve one of our season goals, which is earning 20 plus victories.”